I’ve discovered that you can learn a lot about God while watching your kids play soccer. I believe that God loves us like we’re his kids–that we are children of God. And every once in a while, while I’m watching my kids play soccer, I imagine God watching us play with each other…. 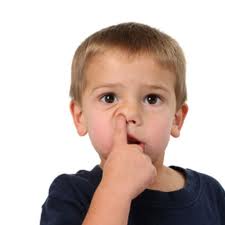 If kids were awarded scholarships for eating boogies, my kids would be getting a free college education….

If you’ve never watched kids play YMCA soccer before, it is so fun. There is something so wholesome about it–being outside, kids running around, parents sitting on the sidelines cheering…. All three of my kids have played soccer now, and I love it. There is definitely a difference between the 4-5 year-old soccer and the 6-7 year old soccer. With the little ones, it’s usually a big mass of kids bunched around the ball (with one or two sitting somewhere on the field picking clovers or their nose…. Sometimes both), but at around six or seven years old, most of them start to get it. There aren’t eight kids all trying to kick the ball at the same time, they start to spread out on the field, there are considerably fewer kids sitting down on the grass and picking their noses…. Something magical happens: They become aware that there are other people on the field. 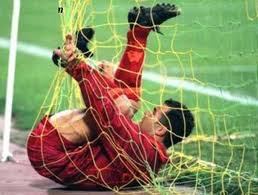 At some point in every game, a kid’s cleats will get caught in the net (a la Spiderman) and he will need help getting untangled…. much like life.

On the first game of the season in the 6 & 7 league, my oldest daughter scored three goals. After a goal is scored, the first thing a kid this age does is looks for her parents (to make sure they saw what just happened) and smiles. As fun as it is to see your child’s face beam with pride after scoring a goal, what made ME beam with pride was seeing her make an actual pass. She had the ball and could have easily kept it and tried to score, but she saw one of her teammates running ahead of her, and in an act of unselfishness that I wasn’t used seeing in kid’s soccer, she passed it ahead. TWICE! When the game was over, she was all, “Daddy, I scored three goals!” And I was like, “That is awesome, sweetie! But HOW ABOUT THOSE PASSES!!!”

I was the recipient of an awesome pass a few days ago. As devotees of The Boeskool might remember from my “How To Not Be A Jackass” post, a couple of nights a week I work as a server in a local restaurant. The other night, at a particularly busy time of the evening, a guy at one of my tables stood up and started talking to me about how his brother had died about three months ago. He explained that one of his bother’s last wishes was for him to give a server a really good tip. As soon as he said this, a memory flashed in my head of having seen this video:

A moment later, he handed me $500. Now, I know that for a lot of people in this country, $500 is not that much money, but for anyone who has a job as a server, let me tell you: This is a really big deal. I had just paid a little over $500 for work done on my piece of crap car, and I was feeling particularly poor that day. The night before, my wife cashed an $8 check that my daughter received for her 8th birthday (we had already paid her the money–Don’t worry) as well as a month-old $5.60 check from the restaurant (one of the bigger checks I’ve gotten from my $2.13/hour wage) so that I could go out to lunch with a friend the next day. Though, none of these details are really that important–We are super blessed. It’s just to say that receiving a gift like this was a really big deal for me, as well as my family. 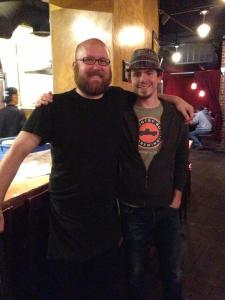 I don’t remember much of what was said, but I do remember that while this picture was being taken, I said, “I am going to blog the HELL out of this.”

I don’t remember much of our conversation–It all seemed a little surreal. I asked him what his brother’s name was, and he told me it was Aaron. Before Aaron died, he made a will and asked that if he had any money, his brother would go out for some pizza and give a server a really extravagant tip, writing “and I don’t mean 25%. I mean $500 on a f***ing pizza.” When he died he didn’t have any money, but they still wanted to honor Aaron’s wish, as well as his memory, so they scrounged together $500 and made a random server’s night. They filmed it (the video above), and within days the video had gone viral. The next thing they knew, they were on the front page of CNN.com, then guests on The Today Show…. They started a PayPal account for people who wanted to help them keep giving these gifts in Aaron’s honor, and before long the account had enough money in it for them to give over a hundred $500 tips. You can read all about it (and even donate, if you feel inspired) at aaroncollins.org, as well as their really fun Facebook page which you can see HERE. 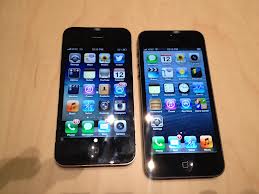 My worries are over! This new iPhone is slightly longer than the old one….

So anyway…. Soccer. I think God cheers for us even more when we pass than when we score. In the grand scheme of things, someone receiving 500 bucks is probably not going to drastically change their life–you might be able to buy a new cell phone or an iPad or something. But witnessing an act of generosity and unselfishness–like a young man’s dying wish to make a stranger’s night, or a brother’s dedication to honoring the memory of a brother he loved–THAT kind of stuff is what really inspires people. And it changes them. And it makes God stand up on the sidelines and beam with pride at one of his kids making the pass instead of going for the glory. 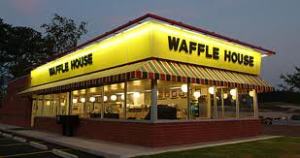 I don’t know if it’s just my arteries clogging, but there is something about eating at a Waffle House that makes me tip like money is no object.

While all of this was happening, I had about eight other tables. One of the tables was a party of twelve that had been there for a while. I apologized for making them wait, and I may or may not have teared up a little as I explained what had just happened (I am kind of a wuss). They paid separately. I told them the story as I gave them back their credit cards to sign. One of the guys’ credit cards got declined, so I paid for his bill and told him it was courtesy of Aaron’s Last Wish. And then I lied to a coworker who sat down and ate in my section and told her the manager had comped her whole bill (God’ll forgive me. Besides, she still left me a fat enough tip to more than cover it…. Which is just like a server). And then the next night, on a Breakfast For Dinner date with my kids, I left the server at Waffle House a tip that he probably won’t soon forget. Right when I was feeling afraid of “not having enough,” this random set of circumstances lands Aaron’s Last Wish in my section, and all of this love was passed along to strangers that Aaron could never have foreseen when he wrote down his wish for a random act of generosity. It’s awesome. 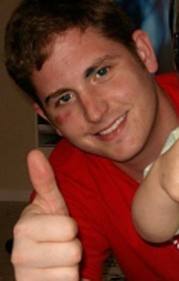 This is a picture of Aaron. Thanks, man.

So thank you, Aaron, for your life and for your wish–I didn’t know you, but you somehow managed to change my heart in some small way. Thank you to all of the people who were so inspired by your life and by the story of your first big tip that they gave generously to keep it happening. And thank you God for calling us your kids. Thank you for being the kind of God who cheers wildly when we give up the ball and make a pass. Maybe you watch us like we watch little kids playing soccer–Maybe you don’t even care which team wins the game–Whether that team is a family, a political party, a country, a church…. Maybe you just want us to be unselfish and loving and learn how to play. Either way, thank you.

Here is the video of me getting the tip…. I’m not sure why I didn’t put this up sooner. Fair warning: I am a huge dork, so if any of my readers imagine me being cool and want to continue living in that dream world, you probably shouldn’t watch this video.

This entry was posted in 1) Jesus, 5) Not Quite Sure and tagged $500 Tip, Aaron Collins, Aaron's Last Wish, God, Making the pass, Picking your nose, YMCA Soccer. Bookmark the permalink.