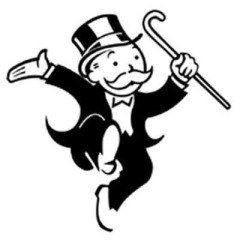 I’d be dancing too if my mustache were that awesome.

The hardest job I’ve ever done I did for $7 an hour. It was the summer before I left for college, and I spent that hot summer working for a local landscaper in my hometown. Most of the work wasn’t that bad–mostly mulching and planting and grass-cutting–but right when the days were at their hottest, we were hired to do a landscaping job on a little island near the border between Michigan and Canada. We took a tiny plane to a nearby island with a small airstrip, and then took a boat to an island that was owned by someone very, very rich. Like “owning your own island” rich. The kind of rich where we gasped at the size and beauty of the house that was constructed (the one we were going to landscape), and then found out that it was going to be the guest house. THAT kind of rich.

Our boat docked next to a barge that was covered with giant piles of topsoil. It turns out that there is almost no soil on the islands in that area, so if you want to plant shrubs and trees, you have to bring in the dirt from somewhere else (THAT kind of rich). There was a little bit of sand on top, but the ground of the island almost entirely consisted of rocks–their sizes ranging from golf ball-sized to volley ball-sized, but most were about the size of baseballs. My job was to dig holes for the trees and shrubs that we would be planting. But it wasn’t really “digging.” It was just making sparks with a shovel. If you’ve ever tried to dig a hole in ground that is all rocks, you know that it is next to impossible. The “hole” turns into a big cone-shaped area in the ground as the rocks and sand caved in on themselves. When that happens, you have to get the hole even bigger, because there needs to be enough soil around the plant to keep it alive.

Imagine something like this, only hotter and way, WAY more spiders….

The small rocks I put into a wheelbarrow to dispose of far away from the guest house (pushing a wheelbarrow full of rocks across sand is not fun…. especially through what I later found out was poison ivy), but when I dug up stones that were larger than a softball, I had to carried them away in a ten gallon bucket. The owner decided he wanted the area underneath his giant guesthouse’s deck to be covered by these bigger rocks (There would be lattice around the deck, but just in case someone looked through the lattice, he wanted them to see uniform-sized stones covering the ground). So what I would do was this: I would take that ten gallon bucket full of softball-sized stones, I would drag it way under a deck that stood about two and a half feet off the ground and I would spread those stones out while laying on my side. The brief relief from the direct sunlight was offset by the fact that thousands of spiders also seemed to enjoy the shade.

And to think, this brave young lady would grow up to be Forrest Gump’s mother.

I think it was the moment that I wiped what I thought was sweat off my face, but was actually a spider, that I had an epiphany: If someone came up to me and said, “I’ll give you seven dollars if you spend an hour digging up rocks and putting them in a bucket and dragging that bucket into a cramped, spider-infested space–all in the blazing heat of summer,” I’d tell them to take their seven dollars, roll it up tightly, and kindly cram it under their own deck. I told our boss that the $7/hr was not working for me. He offered me an extra $2/hr, I stupidly accepted, and I felt like that extra $16 at the end of the day meant some sort of victory for the little guy (me). I had successfully stuck it to the man! I was like a young, poison ivy-covered Norma Rae.

I have been hearing a bit on the news lately about minimum wage, but behind this issue of “minimum wage” is the larger issue of income inequality. It is really frustrating to me to listen to the conversations taking place about the possibility of raising the minimum wage. The most vocal critics of the plan are trying to sell the idea that any mandatory raise in wages will mean a raise in prices. This is the same rational for a position against any sort of tax raise on the rich…. The story goes like this:

If we raise worker’s wages or tax the rich at a higher rate, that money is just going to come out of the pockets of the poor. It’s not like the rich are going to take a pay cut! In order to make up that money, the business owners are going to counter that loss to profits by raising the prices of their products or taking that money out of their benefits or laying people off. So if you want to pay more for everything and have crappier healthcare or want to lose your job, by all means–Cast your vote against “Income Inequality.”

The subtext behind this is that the rich are going to “get theirs” either way, and there is nothing we can do about it. And then they scare the working man by telling him that if companies don’t keep increasing profits year after year, the stock market will collapse, and then what will happen to their 401k? Never mind the fact that the top 1% of income earners account for 50% of the stocks, bonds, and mutual funds in the market–While the bottom 50% account for only .5% of the value of the market. Still, the story is sold that all of our livelihood is tied up in the continued growth of that all important market, as well as the BIGGER lie that somehow, in order to keep the market growing we must pay the people that run them HUGE amounts of money. On a side note, how convenient for the rich that the pittance of retirement savings that working people count on for when they are old is now tied to the continued success the stock market (that is almost entirely filled with the very rich’s money) rather than having a pension? With a system like that, it wouldn’t be a surprise if people didn’t get too upset at the government funneling money into big banks after their reckless greed almost collapsed our economy!

By the way, here is a picture of what the stock market has done since Obama took office. Doubled! His policies seem pretty friendly to the rich….

I don’t think that the issue should be as much about a minimum wage as it should be about a MAXIMUM WAGE. In Switzerland last November, the Swiss people tried to pass something called the “12:1 Initiative” that would limit the pay of a company’s top executives to 12 times the amount of the lowest paid worker. The idea behind this is that no one should make more in a month than another person makes in a whole year. In Switzerland the current ratio is about 148:1, while here in the United States the AFL-CIO puts that ratio at about 354:1. This means that a CEO of one of the top 500 US companies makes as much in one day as the average worker makes in a whole year. If you want to see a startling list of the companies with the biggest CEO pay ratios, CLICK RIGHT HERE. The “12:1 Initiative” was defeated when the Swiss voters were scared into believing that enforcing a ratio like this would only encourage the rich to take their money and go somewhere else (one of the other common stories sold to voters when people start feeling like income inequality needs to be addressed). 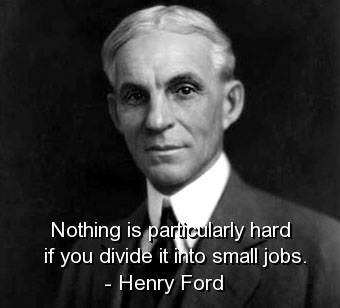 We can only change the world if we do it together.

The Economic Policy Institute reports that from 1978 to 2012, CEO pay (including options) increased 875%, whereas worker pay over that same period went up a little over 5%. Everyone should be able to see that this sort of trend is unsustainable. The SEC (Securities & Exchanges Commission, not the SEC that got its butt kicked in this year’s college football National Championship) has proposed that public companies disclose their ratio, but even if something like that passed, it would only do any good if people actually started paying attention. Some sort of ratio needs to be set. It will probably never be something as drastic as 12:1, but even 120:1 would be a giant improvement. This increasing concentration of wealth is not only immoral, it is bad business for EVERYONE–the poor AND the rich–because it cannot be sustained. Pretty soon, we’re all just shoveling rocks on a rich man’s island. Henry Ford wanted to make sure that all the people working for him were payed well enough that they could afford to buy one of his cars. This sort of work has to be accomplished through the power of the people! It cannot be done through patient faith in the individual to do the right thing on his or her own–That sort of faith in lack of regulation leads only to the rich using their wealth to get even richer, while the only thing that trickles down is more and more poverty. It’s the sort of policy that allows for a 1795:1 income ratios while 46 million people in this country live in poverty, and it’s the same sort of policy that allows to millionaires to neglect chemical plants and end up poisoning rivers and drinking water, just to declare bankruptcy a week later and walk away richer than the most of the West Virginians they poisoned could ever hope to be…. Something needs to change. And it’s us.

On that note, I leave you with a movie recommendation. Please watch the documentary called I Am. It’s available on Netflix streaming, and it has an important voice to contribute to this continuing conversation of how we can work together to make things better. The trailer for the film is below, but the movie is even better than the trailer might suggest.

This entry was posted in 2) Politics and tagged 12:1 Initiative, Henry Ford, I Am Documentary, Income Inequality, Maximum Wage, Minimum Wage, We Are the 99%. Bookmark the permalink.

35 Responses to Minimum Wage On A Rich Man’s Island