FoxNews Is The Worst Thing To Ever Happen To America

I know what you’re thinking: “What about slavery? What about the Civil War? What about the Great Depression? What about 9/11?” And yes, those things were all horrifically tragic and terrible in their own way. Obviously. Still, Fox”News” might be worse. Hear me out….

This whole “blame game” has been going on for quite a while.

When you have three kids, there are a lot of different versions of stories. Luckily for us, our oldest is a person whose instincts almost all seem to be good. Honesty comes naturally to her for some reason. The younger two? Not so much. They are both fantastic too–it’s just that we sometimes have to coax the truth out of them. After someone has wronged someone else and we’re trying to sort it out, it has been so helpful to have someone trustworthy who we can look to and ask, “What happened?” Now, imagine if my boy was sick of that truthful voice and decided to attempt to ruin the trustworthy reputation of his older sister, so he brought in someone who looked just like her, but who always blamed things on his younger sister. And then our younger daughter brought in another lookalike to blame things on her brother. Pretty soon, we don’t know which older sister is the truthful one. Then the ACTUAL truthful one, in an attempt to keep from being mistaken for either of the two doppelgängers, stops telling us who is to blame. Next thing you know, nobody knows what happened anymore. This is what Fox”News” has successfully done to America (I think the “News” part of Fox”News” should always be in quotes).

The other day, after I posted a Snopes link on a story someone posted on Facebook that was completely false, a person in the comments said something along the lines of “I heard Snopes gets a lot of things wrong sometimes.” This kind of thing drives me absolutely crazy, and it is the direct result of a Fox”News” mindset. Even a non-partisan fact checker can be dismissed now if it goes against your pre-held beliefs because of something you “heard.” But what do we expect, when the shows that are supposed to inform the public put two opposing views on and let them scream? The job of the press is not to put a republican pundit and a democratic pundit in front of the camera and let them yell at each other and call the other one a liar–The job of the press is to help us sort it all out and figure out the truth. I’m reminded of  Jon Stewart’s appearance on CrossFire when pleaded with them to “Stop hurting America!” 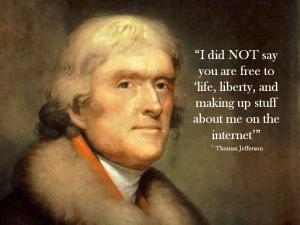 Thomas Jefferson once wrote to a friend about how important a free press was to our country’s existance. He wrote that if he had to choose between “a government without newspapers or newspapers without a government, I should not hesitate a moment to prefer the latter.” Despite what some on the far right believe, what he was NOT saying here was that he didn’t want a government. He understood government to be important, but he also understood (as we all should) that the press is an intergal part of a democracy, and without this check on the people who are in power, government can turn into something grotesque in a hurry. When power is concentrated, there needs to be things in place to CHECK that power. “Absolulte power corrupts absolutely.” The free press is the people’s check on the concentrated power of the government; whereas the government is the people’s check on the concentrated power of Big Business. The death of journalism is the death of democracy.

The experiment of democracy–the experiment of America–is the attempt to take the power from the hands of a few (as things have almost always been) and put it into the hands of us all. But in order for this experiment to work, we need an “informed electorate.” This is what Fox”News” has been damaging and degrading since its inception. By creating an overtly partisan “news” network (while claiming to be “Fair & Ballanced” and setting up an imaginary enemy of a “Liberal Media”), they have very successfully created the perception that all journalism is partisan. There is “the truth” as the right presents it, and then there is “the truth” as the left presents it.

Truth turns into something subjective. And then, if the press is critical of something one side does that is dishonest or hypocritical, the press is seen as taking sides. So we’re left with a situation like the one we’re in right now: One where the government is shut down and we’re moving toward default–Meanwhile, the donkeys say it’s the elephants’ fault while the elephants say it’s the donkeys’ fault, and we have no press to sort it all out. If anyone dares point out that many of the republican leaders who have led this march toward shutdown and default have publicly talked about wanting this for a few years, that person is immediately and easily dismissed as being part of the “liberal media” (as many of you are doing to me, if you managed to make it this far into this post).

And the grossest part about all of this is that these leaders’ campaigns are being funded by billionaires–Billionaires who realize that if they can use their resources to get these anti-government folks elected and we’re all arguing over whether or not we should fund the government, we certainly can’t focus on things like workers’ rights. Or food safety. Or improving education so that our kids will grow up smart enough to see the wool that’s been pulled over their eyes. The last thing the people with all of the power want is an INFORMED ELECTORATE. It’s the same reason that the Taliban are always blowing up schools in Afghanistan and insisting that girls can’t be educated….

And really, people on the right should be the most upset. People who are genuinely afraid of the government SHOULD be the most concerned about the most powerful check on the government’s power being rendered impotent. With such a fear of coming across biased, journalists are afraid even to place blame where blame is rightly due. And because of the success Fox”News,” even IF a news agency did have the balls to place blame where blame is due (on either side of the aisle), that story can be easily dismissed by the offending side as coming from the “right wing media” or the “liberal media,” because the truth is subjective now. They have been so successful at selling their narrative that to even criticize Fox”News” discredits an organization as being part of the partisan “liberal media.” 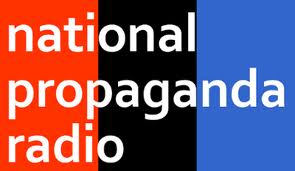 I wonder why the people with the power would be so interested in taking away funding for public radio….

And this “everything is partisan” mindset is contagious, and legitimate stories are  dismissed because they are posted on an overtly partisan website (I’m sure I have been guilty of doing this). Now even a trusted news source like NPR can be dismissed by the right for seeming like they are running more stories that are casting republicans in a negative light…. when maybe, right now, there is no way to truthfully tell the story without casting them in that light. Maybe the actual story is that the political right has moved so far to the right that it deserves a little criticism from the Main Stream Media. When Fox”News” ran a story showing “media bias” because of the high percentage of News networks that placed blame for the government shutdown on the House republicans, Jon Stewart responded by saying, “In other news, the media has been blaming floods on water instead of fire.” But of course, Jon Stewart is another one of those easily dismissed voices.

“The Devil hath the power to assume a pleasing shape.” It sure does, Billy. It sure does….

Slavery, Civil War, Great Depression, 9/11…. Those events were certainly worse things when considering how they hurt PEOPLE, but if we’re considering the worst thing to happened to the United States of America, I think a case can be made that FoxNews has done the most damage. A billionaire has put together a slick, watchable “News” network that has contributed to a more uninformed electorate, while also discrediting actual News organizations whose job it is to be a check on the power and integrity of our government. Meanwhile, more and more billionaires buy up news outlets with the incredible amounts of money that they are making thanks to the anti-government candidates whose elections they funded working to insure that the government doesn’t fulfill its role as a check on big business in order to protect the rights of We The People…. It’s like a Shakespearian Tragedy, but Shakespeare is clearly part of the liberal media. So who’s going to believe him?

Still, it’s not like there is no hope. Part of me thinks “Our country made it through McCarthyism, it’ll make it through this.” Then again, when the public turned against the tactics of Joseph McCarthy (and the really heinous thinking behind it), it was largely due to a trusted press rightly highlighting how messed up things were–as well as people of integrity willing to ask the hard questions like “Have you no decency, sir?” If we come out on the other side of this stronger and possessing a better BS-sensor, maybe we’ll look back at the damage Fox”News” did to the truth as a good thing. I doubt it. Oh well. There’s always Al Jezeera America. But who is going to believe something that sounds so…. Muslim.