Here’s the thing, folks… Since Charlottesville, Tump has doubled down on his shameful support of white supremacy. He waited two full days before denouncing the “bigotry and violence ON MANY SIDES.” Then, after everybody in the country got pissed off (other than white supremacists, that is) over his moral equivalency of neo-nazi, white supremacist violence/intimidation with a group of people willing to use force to DEFEND people from that violence/intimidation, someone wrote a statement for him to read where he more vehemently and specifically focused his criticism on the actual nazis. A day later, during a bizarre press conference where he announced an Executive Order about getting rid of regulations that he considers a barrier to infrastructure work, he officially went off the rails. You have almost certainly seen highlights of this LOW POINT in a presidency full of low points, but sometimes you might suspect that things have been edited to make him look bad. Just in case you haven’t seen the whole thing, here it is:

Without a script to read, he immediately went back to his “there’s a lot of blame to go around” line of reasoning. He defended the people doing Hitler salutes as “some very fine people.” He pointed out that they had a permit, when the counter protesters didn’t. And then he defended confederate monuments, using a slippery slope fallacy and comparing Robert E. Lee — the traitorous, murderous general fighting for the “right” to enslave people with black skin — with President George Washington. But OF COURSE he would say that there were “very fine people” marching with the KKK and chanting “Jews will not replace us” — HIS OWN FATHER was arrested at a KKK rally for fighting with police. He then tweeted this series of tweets in defense of keeping up monuments to confederate traitors who were willing to kill to keep their slaves…

Sad to see the history and culture of our great country being ripped apart with the removal of our beautiful statues and monuments. You…..

…can't change history, but you can learn from it. Robert E Lee, Stonewall Jackson – who's next, Washington, Jefferson? So foolish! Also…

…the beauty that is being taken out of our cities, towns and parks will be greatly missed and never able to be comparably replaced!

Unbelievable. He actually did bring the Middle East together. pic.twitter.com/miP9MyVLsS

But in the midst of all these shameful statements, all this equivocation, all this white supremacy, and all this outrage as a response to the POTUS’s blatant racism and lies, there are 2 THINGS which might have gotten overlooked that I don’t want you to miss:

The first is Joe Arpaio. The day after Heather Heyer was murdered by a white supremacist driving his car into a crowd of protesters, Trump decided to tell Fox”News” that he was “seriously considering” issuing a presidential pardon to Joe Arpaio. You might remember him as the Arizona sheriff who called himself “America’s Toughest Sheriff.” He would put criminals in pink outfits and keep them in blazing hot tent cites that he referred to as concentration camps. He was also buds with Donald Trump, because they both were involved in perpetuating the “Birther” conspiracy theory. After the Department of Justice decided Sheriff Arpaio oversaw the worst pattern of racial profiling in U.S. history, they ordered him to stop “detaining people” (that’s immigrant-speak for “imprisoning people”) when there was no suspicion that they had committed a crime. They found that Arpaio continued to unlawfully and UNCONSTITUTIONALLY arrest the Latino people in his county — people who had done nothing wrong — just for “not having their papers,” and they found him guilty of Criminal Contempt for willfully violating a court order. He is scheduled to be sentenced in October of this year.

The brown is slimming… Which is nice.

So — just to recap — One day after a white supremacist rally that left a counter protester dead, the president of the United States suggests he will pardon a man (who joined him in the false, racist claim that President Obama faked his birth certificate and wasn’t a “real” American) for the crime racially profiling and illegally detaining Latino men and women. Our “Law & Order” president plans on forgiving a man who unconstitutionally singled out Mexican immigrants for harsh treatment. But this should come as no surprise… This is what white nationalists do: They focus on “the other.” They want people to be scared of immigrants, scared of people who look different, scared of people who speak a different language, and scared of people who have a different name for God.

And this is why Trump — after explaining that he waited so long to denounce the murderous nazi terrorist attack in Charlottesville because “It takes a little while to get the facts” — condemned another murderous terrorist attack in Barcelona only a few short hours after it occurred… Because the murderous terrorist in Barcelona doesn’t look like “us.” He doesn’t speak “our” language. He doesn’t worship “our” God. He is OTHER, and OTHER is to be feared. And blamed. And demonized. Everything we have to worry about comes from OUTSIDE… despite the fact that domestic terrorist — mostly white men — are the single greatest terrorist threat in this country. Still he wants us to believe “The threat is from outside our borders! The Muslims are coming!! BUILD A WALL!!!” We just had an American citizen murdered by a radicalized, home-grown nazi terrorist, and it took him two days to respond… And yet, mere hours after an attack in Spain, he makes a tweet like this:

Homeland Security and law enforcement are on alert & closely watching for any sign of trouble. Our borders are far tougher than ever before!

Which brings us to the SECOND thing I didn’t want you to miss: The President of the Unisted States just called for the slaughter of Muslims. Without context, this tweet might seem unremarkable…

Study what General Pershing of the United States did to terrorists when caught. There was no more Radical Islamic Terror for 35 years!

But what our nitwit president is referring to here is a DEBUNKED myth… A story that never happened about a war crime committed by a U.S. General. He believes that General Pershing slaughtered 49 Muslim prisoners by killing them with bullets dipped in pig’s blood, then burying them with pigs. Trump has spoken about this myth many times, including while campaigning. Well, “spoken about this myth” is imprecise language… HE LIED. He told this lie many times. When he told the lie here, it solved the problem for 25 years…

When he told the lie ANOTHER TIME, that time he said it “solved the problem of Radical Islamic Terrorism” for 42 years (25 years, 35 years, 42 years… What’s the difference, right?). It is a virulent, brutal, and explicitly Anti-Muslim LIE (again, proven false by SNOPES AND POLITIFACT) which the president keeps telling. There is a terrorist attack in Spain which ISIS takes credit for (perpetrated in the exact same way that the nazi terrorist in Charlottesville carried out his attack), and within hours, our Racist Old Man of a president tweets out a LIE which calls for brutally slaughtering Muslims with bullets dipped in pig’s blood to send a message to Muslim who are “thinking of causing trouble.” But this is not the first time Donald Trump has suggested committing war crimes… Here he is suggesting that we kill not only the terrorists, but also kill THEIR FAMILIES:

Yeah. There’s SO much crazy going on right now, I didn’t want you to miss these two very disturbing pieces of information. While defending himself against accusations of racism and white supremacy, and while indefensibly making moral equivalencies between nazis and the people standing up to nazis, the president of the United States of America spoke of his plans to pardon a man who was found guilty of willfully disobeying a court order to stop racially profiling Mexican immigrants, and he urged his followers to “research” a lie he continues to tell which suggests that mass murdering Muslims with bullets dipped in pig’s blood will solve our problem with terrorism. In short he said, “I’m not a racist, but #NotAllNazis and #HeritageNotHate… Also, I’m going to pardon a man convicted of unconstitutional racism, and here’s why we should slaughter Muslims.”

Donald John Trump is your crazy uncle who believes every racist email forward he’s ever received… Only this time, your crazy great uncle has the nuclear codes. After this week’s fiasco, I don’t know if there will be any more press conferences where he answers direct questions himself. The mask is off. He is saying things publicly that republican leadership is only supposed to say while they’re on hunting trips. This week’s press conference was the white supremacist version of Tom Cruise asking Nicholson’s Col. Nathan R. Jessup over and over, “Did you order the Code Red?” in A Few Good Men… And Trump’s response was an indignant and furious “YOU’RE GODDAMN RIGHT, I DID!!!” And everyone stands around looking stunned that he actually said it…

And at some point, they are going to try to blame all this on his age. And dementia. DON’T LET THEM. They are all supporting this… And they don’t ALL have dementia. His “Evangelical Council” has stayed supportive (even as commercial and manufacturing leaders abandon him). Sure, Bob Corker made critical remarks about the president this week, saying he “lacks competence and stability,” and that he “has not demonstrated he understands the character of this nation.” But even this statement is not critical of the things he has said… It’s more of a “You can’t come right out and say this stuff just because some “snotty little bastard” lawyer keeps asking you if you ordered the code red.” This is who Donald Trump has been his whole life. This is who he was during the campaign. A 70-year-old man does not change and all of a sudden become “presidential.” 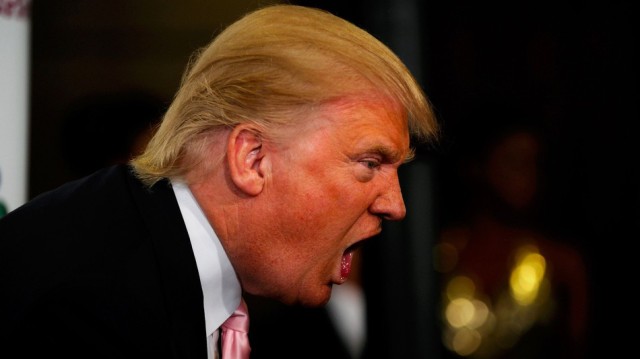 Even with Steve Bannon gone, this is who he’s ALWAYS been. All along, he has been a rich, racist narcissist who has always been a fanboy of dictators and authoritarian leaders… A lonely megalomaniac who kept a copy of Hitler’s speeches next to his bed… A raging misogynist and philanderer who moves from one damaged woman to the next… A tragic lump of white privilege whose KKK daddy gave him enough cash to pimp out his fake last name for a little bit more money.  He is a dangerously broken man… And this dangerously broken man has been put into a position of great influence by a counterfeit “church” who is way more interested in POWER than it has ever been interested in following Jesus. We must be better than this.

Thank you so much for reading. A special thank you goes out to Jaemin, who is my newest Patron. If you value this blog, if you look forward to it, if it gives you hope, and you’d like to help support it, you can ALSO BECOME A PATRON. Or, if you’d prefer a one time tip for a job well done, you can LEAVE A TIP ON PAYPAL. It you do that, you can designate that money to go toward boosting a post, so that even more people will see it. If you like this, and you’d like for other people to see it, share it… Either ON FACEBOOK, or ON TWITTER. Either way, take care of yourselves. And like Van Jones says, “When it gets harder to love, LOVE HARDER.”