Old Yeller, Forrest Gump, and Other Things That Make Me Less Manly

Okay, if I keep writing these long posts, this is going to start feeling like work instead of feeling like creativity and fun. This one should be shorter (ding!). 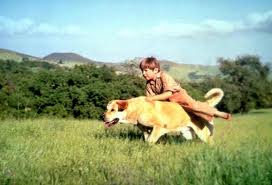 Apparently, riding the dog like it's a small horse is FROWNED ON IN THIS ESTABLISHMENT!!!

I have cried three different times this evening. This is not that unusual for me, actually. I’ve got a condition that doctors refer to as “being a complete wuss.” The first time was while watching a documentary called Unknown Donor about a man who had been a sperm donor for years and fathered many kids. The film followed some of the kids as they met their half-siblings and even met the donor/father (you can watch it for free HERE until October 28th). The second time was while watching a really stupid marriage proposal video on a plane. It was so awkward and dumb, but something about the real emotion that the girl showed made me tear up… I’m not proud. The third time was watching a clip from The Color Purple that a friend posted on my facebook wall. I have never seen the movie (not proud of this either), but watching one 6 minute clip had me blubbering like a kid who just finished reading Old Yeller. After having to kill his own dog. By bludgeoning it with a copy of Old Yeller. Given to him by the old lady from Titanic.

I can remember being a kid and learning early on that boys aren’t supposed to cry. Every once in a while, a boy would cry at school–like really break down and cry about something–and it was so shameful that the only way we could help him was by not making eye-contact. But this moratorium on crying was mostly about getting hurt. At some point, all young men agree that it is no longer acceptable to cry because of hurt feelings or pain. While playing basketball at school, I once got kneed in the solar plexus and got the wind knocked out of me so bad that I seriously thought I was going to die. Faced with the end of my young life, my thoughts were not of my loved ones, my unrealized dreams, or what was going to happen after I died–I remember not being able to breathe and saying to myself, “Just don’t cry. Just don’t cry. We’re probably not making it out of this alive, but just in case we do… There are people around. Just don’t cry.”

Alright...You hold your elbow, you lovingly drape yourself on his shoulder, and you push up the sleeves of you sweater. Perfect! That's rock & roll right there, boys.

At some point, it becomes alright to cry because of love–but even then, you didn’t want there to be people around. I can clearly remember lying on my waterbed listening to a tape of I Want To Know What Love Is by Foreigner about 10 times in a row because it spoke to me about a girl I loved. Tears fell down my face as the gospel choir singers came in and it all felt so true: “I seriously DO want to know what love is. And I seriously do want YOU to show me…. ‘And I know, and I know…. I know you can show me!'” Then I’d wait the 45 seconds or so that it took to rewind the tape and listen to it again…. I’m about 24 years removed from lying there, feeling the truth of my emotions as I listened to that song, and I can still feel it.

I’m not sure exactly when I stopped caring if people saw me cry, but it was sometime in college. I’m betting that it’s easier to cry as a guy going to a liberal arts college in Michigan than it is for a guy going to an SEC school. Maybe that’s why it’s a lot harder for me to identify with guys who went to schools down here–they’re still observing some of the playground rules I left behind in college. I can remember going to see the movie My Life with Michael Keaton and Nicole Kidman. If you haven’t seen it, it’s awesome. It is the story of a man who finds out he has cancer around the time he finds out he is going to have a son. He doesn’t expect to live to see his son, so he videotapes lessons for his son to see after he’s gone. There were four guys and and one girl in our group, and at one point in the movie I looked down the row and saw that we were all crying like a bunch of idiots–all of us except the one girl. Then THAT made us laugh, but we were still crying, so the combination of the laughter and the crying sounded to the rest of the theater like four college-aged men violently sobbing in a movie theater. The silhouettes of people turning around to see who was making all the noise did nothing to restrain our tears….

If you are not crying at this point in the movie, check for your pulse. Because you're dead.

Now, here I am–A grown man, with three kids and a wife, who can barely get through an episode of Scrubs (that I’ve seen six times) without tearing up at the end. Or reading that stupid I’ll Love You Forever book to my kids–when the old lady sneaks in and rocks the man “back and forth, back and forth…” (spoiler alert) AND THEN SHE DIES!!! I mean, give me a break. Thing is, it’s getting worse. I have had to pull over a couple of times because StoryCorps on NPR had made me a danger to myself and others.  Now, if I try to even tell someone about something that made me cry, I find myself fighting back tears. If you want to see a fun trick, watch me try to tell someone about that scene in Forrest Gump when he finds out he’s a dad and he looks at Jenny and says, “Is he smart, or is he…” and his chin starts to quiver. I seriously can’t do it without my eyes getting glossy. It’s ridiculous. I’m just typing about it and my computer screen is blurry.

So yeah, I guess I’m kind of a sissy when it comes to crying, but I’ve come to terms with it. I mean, what do I care, right? So what if I cried while watching Titanic. And so what if I cried after it was over. And so what if it was on the way home from the theater. That’s one of the nicest things about being married–To have someone who really knows you, sees you tear up watching a commercial for a department store, and loves you anyway.

Just thinking about how lucky I am makes me feel like crying….

This entry was posted in 5) Not Quite Sure and tagged Crying, Foreigner, Forrest Gump, Old Yeller, Social Norms, StoryCorps, Tear Jerkers, Titanic. Bookmark the permalink.

13 Responses to Old Yeller, Forrest Gump, and Other Things That Make Me Less Manly