How To Keep Jeff Sessions From Becoming Attorney General

Donald Trump has selected Alabama Senator Jeff Sessions to be the United States Attorney General. Now, you might be asking yourself, “Who the hell is Jeff Sessions?” Well, I’m glad you asked…

Jefferson Beauregard “Jeff” Sessions III. That’s…  his actual name. In 1986, when he was nominated by Ronald Reagan to be a Federal Judge, the Senate Judiciary Committee rejected his nomination because of multiple allegations of racism. Here are a few of the highlights of Jeff Sessions’ history of racism:

Though, in his defense, it’s got to be really hard to come from Alabama and have a name like “Jefferson Beauregard Sessions the Third” and NOT end up being racist…

I can’t post all of the pieces of evidence showing Jeff Sessions’ history of racism here, but you can CLICK HERE to see an article with many pieces of evidence, including minutes from the Judiciary Committee’s hearing and the testimony of people who worked with him. Or you could just research it yourself. Google “Jeff Sessions” and “Racism,” and look for articles that have actual evidence. And links to reputable news sources.

After his racism disqualified him from his federal appointment (at that time, only the second time in 50 years the Senate had rejected an appointment), apparently the people of Alabama didn’t think those bullet points were that big of a deal, because they elected him to be a Senator. And Senators in Alabama don’t change very often–He has been in office for 20 years, and he is still the junior Senator. Because despite their calls for “draining the swamp,” republicans keep reelecting the incumbents over and over again. And now Donald Trump has asked him to be the Attorney General.

Here we see Jeff Sessions showing how many “black friends” it takes to not be racist.

Most people don’t even know what the Attorney General does. The AG is basically the chief law enforcement officer, the chief lawyer for the United States Government, and the head of the Department of Justice. This is a very big job. And it has very big ramifications for how law enforcement responds to issues of civil rights. Look it up. It is a BIG. DEAL. As Attorney General, Eric Holder investigated use of force by police, financial regulations, voter ID laws, environmental policy (Sessions is a climate change sceptic), and a host of other Constitutional rights that the AG can decide whether or not to focus on. The implications of a person of Jeff Sessions’ character holding that position are–to use a term made popular by a dumpster fire and a national disgrace–YUGE.

So please listen–During his candidacy, Trump said so many outrageously offensive things and completely false things that it overwhelmed anyone’s ability to adequately respond to them… It was basically a war of attrition with horrifying and untrue statements. By the time people could attempt to respond to something awful he had said (and inform people as to why it was dangerous or wildly offensive or false), he would have already said ANOTHER awful thing that was dangerous or wildly offensive or false. Now it seems Trump is applying the same strategy with his Cabinet appointees. A few days after naming Alt Right leader and Breitbart head Steve Bannon as his Chief Strategist, he taps Jeff-Fucking-Sessions as his pick for Attorney General. And the thing is, I don’t have time to go into all of the many, many reasons why picking avowed white nationalist Steve Bannon is uniquely horrifying (though, if the words “avowed white nationalist” aren’t enough for some reason, his own wife has accused him of being anti-semitic). And just when people are trying to get organized around opposition to Steve Bannon, Trump names ANOTHER shit show as one of his top Cabinet positions–A name that 95% of the people in this country don’t recognize. And then, as people work to educate the citizens about how disqualified and dangerous  Jeff Sessions is, he’ll throw out yet another name… And people will slip through. Already people are forgetting about Steve Bannon. How are people supposed to respond to such a steady stream of disappointment? Honestly, it is so overwhelming that it makes me want to shut my computer, lie in bed, and just cry… 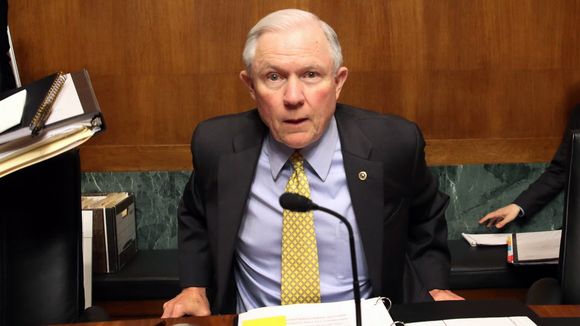 But here is an important difference between the position of Chief Strategist and the position of Attorney General: Attorney General is subject to Congressional approval. And that is where YOU can come in. That is where YOU HAVE THE POWER TO MAKE A DIFFERENCE. I read an article recently that said phone calls are the most effective way of getting a message through to your elected representative… That emails and letters can be largely ignored, but PHONE CALLS have to be answered and dealt with by staffers. So here is what I want you to do.

At a time when only the most overtly racist white supremacists were supporting Trump, Jeff Sessions was one of the first in line. And now, he–and people like Steve Bannon–are being rewarded with Cabinet positions. At a time like this–a time of elevated attacks that are racially and religiously motivated–we cannot have a person with a history of racism being the Chief Law Enforcement Officer in the land. This is the exact opposite of saying “Black Lives Matter.” If Trump wants to have a white supremacist as his Chief Strategist, realistically there is nothing we can do to stop him… I doubt that appealing to a narcissist’s “sense of right and wrong” will have much of an influence.  But we CAN stop him from making a man with a long history of racism the Attorney General of the United States of America. We HAVE to. We need to FLOOD the phone lines of our lawmakers and representatives with calls voicing our disapproval of this choice. Please. PLEASE. PLEASE help me keep this man from becoming Attorney General.

If you love this blog, SUPPORT IT. Boost it on PayPal. Share it! Help me get the word out… You can also follow me on Twitter and Facebook. Also, thank you to my newest Patron, Karla Underwood. WE ARE NOT POWERLESS!

This entry was posted in 2) Politics and tagged Attorney General, Black Lives Matter, History of racism, Jeff Sessions, Racism, Trump Cabinet, We are not powerless, White Supremacy, Who is Jeff Sessions?. Bookmark the permalink.