Losing The Creation Debate By Asking The Wrong Questions

Posted on February 5, 2014 by theboeskool 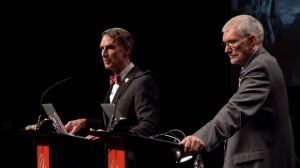 I was more of a Mr. Wizard sort of kid….

I don’t care who won the “Creation Debate” between Bill Nye (The Science Guy) and Ken Ham (The head of Kentucky’s $29 Million “Creation Museum,” but also famous for having an incredibly un-kosher name) that took place last night. Normally, I am all about this sort of thing–this interesting intersection of faith and science–but I really couldn’t care less about the “winner” of this whole spectacle. Trying to decide on a winner between faith and science is like trying to decide which a child REALLY needs–Does she need food and water, or does she need love…. I reject the question. 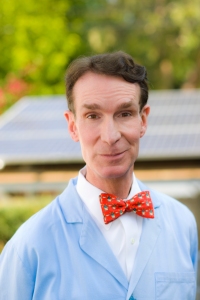 Anyone who wears that tie can’t be THAT smart….

Anyone who knows me knows that I don’t buy into the idea that the numbers in the Bible were somehow meant to give modern people a perfectly factual account of how many people there were, exactly how long they lived, and precisely how old the earth is. But even though I believe this way of looking at the Bible (demanding rigid inerrancy, which I wrote a bit about HERE) is as harmful for the Church as it is ignorant, it doesn’t mean that a “creationist” view like the one held by Ken Ham is impossible. It’s very possible. If we’re dealing with the possibility of a God who has the power to create something out of nothing, then it stands to reason that this same God could possibly create a world with dinosaur bones already in it to test our faith. He could create a tree with rings in its trunk. There are billions of stars that are billions of light-years away that seem to be revealing their age, but it’s possible that he created the universe 6000 or so years ago with that light already hitting our eyes…. To try to trick us. It doesn’t make a lick of sense, but it’s possible.

Wait…. Raptor? I thought it was RAPTURE!!

In the Bible, Jesus told many stories. One time, when a Jewish man asked him “Who is my neighbor?” Jesus said, “A man was walking down this road to Jericho…. He got robbed and beat up and left for dead. A priest (a good Jew) passed without helping, a Levite (another good Jew) passed by as well, but a Samaritan (whom the Jews hated) was moved with compassion and helped him. Which one was a neighbor to him?” ~ Luke 10:30-36 ABV (the Abridged Boeskool Version) Now listen–If you read this story and then go out looking for archeological evidence of this specific robbery on the road to Jericho, you are missing the damn point! The point of a story like this is to let it change you. The point is to let its truth become a part of you. To ask yourself “Where is God in this story?” And, maybe more importantly, “Where am I in this story?” “What happened? Why does it matter? How am I different?”

But here we are, discussing who “won” a silly creation debate that took place in a building that has been rightly described as “a monument to scientific illiteracy.” And when we focus on trying to find a winner, we all lose. Once again, the world has given us a choice between faith and science–Between reason and religion, as if we have to choose one or the other. But this false choice just reinforces the narrative that in order to follow Jesus, we must check our brains at the door. If the answer is either faith or science, once again–I reject the question. Both podiums in this debate were looking for the truth, but they both defined “the truth” in terms of numbers and math…. When the life-changing, WORLD-changing truth that the Bible reveals has always been the sort of truth that asks the question, “Where am I in this story?”

I’ve been married now for almost 12 years. It didn’t take me long after I’d met my wife for me to figure out that I loved her. She has taught me so many things since I have known her. She shows me how to be more considerate. She reminds me to let other people talk. She taught me to wash my hands. She teaches me every day how to be more patient and loving to our kids. But I think most importantly, she’s CONVINCED me that she loves me–despite the sometimes painful realizations that I still have a whole lot of crap to work on. Now, let’s say that she writes down some directions, and it’s really 12 miles to the intersection instead of 10 miles (like she wrote). Let’s say she told me that she dated that guy in high school for a year, but it was really closer to two. Let’s say she claimed her great grandmother immigrated to the US, but it was really her great GREAT grandmother. Imagine what a fool I’d have to be to let some small things like this make me question whether she ever truly loved me in the first place…. Where are you in this story?

***The absolute best thing I have ever read regarding this whole issue of Biblical Inerrancy and understanding what the Bible actually IS, is a Tumblr by Rob Bell called “What Is The Bible?”  It is accessible and plain and funny and true. Start at the first one, and read it all the way to the end. It’s fantastic.

This entry was posted in 1) Jesus, 2) Politics and tagged A matter of perspective, Asking the wrong question, Bill Nye, Creation Debate, Ken Ham, Where am I in this story?. Bookmark the permalink.