The Parable of the Big Clock

Once upon a time, there was a clock. It was right in the middle of the town, and it was very big and very tall–Tall enough that everyone in the town could see it. Some people thought the clock was too big–Others thought it wasn’t big enough. It was made a very long time ago, and it was intended to help all the people who lived in the town. Some people needed the help more than others, but everyone benefitted from the clock in some way–whether they knew it or not. 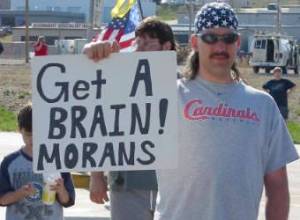 Mine’s under this patriotic do-rag….

The kids of the town learned how to tell time by looking at the clock, and they grew up adding and subtracting the numbers to figure out how long it would be until the clock’s bell would signal the end of the school day. That same bell also let the town’s workers know that they had worked long enough, and it was time to go home and spend some time with family and friends. All of the streets in the town were numbered in relation to the clock, and it helped keep the time of the traffic signals. Beneath the clock was a market, and the weights and measures were kept safe in the lower part of the tower to ensure that people were trading fairly. If there was danger somewhere, the clock would help let people know about it. The bells would be rung over and over if there was a fire, and if people from another town came to attack, the clock tower was tall enough for a lookout to see them coming, and its walls were strong enough to provide protection. For many many years, the clock tower was a point of pride among the people of the town–Something they could point to as a symbol of community.

For the record, I am for a pubic option….

It was everyone’s responsibility to keep the clock in good working order. It wasn’t an easy job, because there were so many moving parts. Many of the people in the town had jobs that involved keeping the clock running smoothly. Many of the town’s young people would learn how to fix things and how to work hard by watching the people whose job it was to keep the clock clean and repair it when parts broke down. There were people whose job it was to educate the next generation about how to take care of the clock, and by doing so, hopefully also how to take care of each other. There were even special representatives who were chosen by the townspeople to make the new gears and cogs that would take the place of the gears and cogs that were getting old and needed replacing. These elected people were especially important to the proper functioning of the clock. Though there were many different opinions as to the ideal size of the clock, almost everyone agreed that the clock was valuable to the people, and they should work together to keep it working.

Our you kidding me?

Under the protection and the education that the clock provided the town, there were some people who grew very wealthy. The goal was for everyone to contribute to the maintenance of the clock, but some of the people could barely afford food, so it made sense for the people who had more to help more. These “people who had more” started resenting the fact that part of their fortune went toward the maintenance of the clock. They didn’t need that stupid clock–They could afford watches…. And they CERTAINLY didn’t need that bell always reminding all their workers that it was time to stop working. There’s PROFIT to be made. They didn’t need their kids to be educated on how the clock works–They could afford to have private craftsmen teach their kids…. Besides, their kids would probably inherit their business some day. They didn’t need some lookout in the clock tower–Their houses were tall enough and strong enough that they could see trouble coming…. Besides, they were plenty protected with all the weapons they had in those big houses. Within the town, they even sectioned off their neighborhoods with tall fences to keep everyone else out–And good luck getting into those gated communities.

The people in those gated communities, bunkered in those big houses, surrounded by all those weapons, started spreading a rumor that the clock doesn’t work. “Tear it down!” they yelled. “We’re all better off without it! The clock causes more problems than it solves. If you need something the clock used to provide, you can buy it from US (at a price we’ll set). If you need to know what time it is, WE’LL tell you.” But the townspeople weren’t buying it. They remembered that the clock was there to help people–especially the ones who couldn’t help themselves. 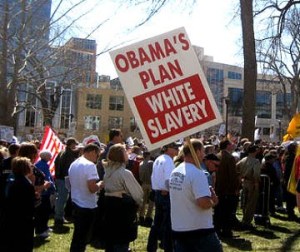 For the record, I am against white slavery.

So a plan was devised. The people who had gotten rich in the town that was built around the clock–The ones who were upset that more was being asked of them simply because they had more–The ones who felt like they didn’t need the clock anymore, and because of that, believed no one should need the clock–The ones who started the rumor that the clock doesn’t work (while filling their factories with people who were trained and educated in the shadow of that clock)–These same people decided to use their wealth and influence to elect representatives who would fill the clock with brittle, broken cogs, and gears with missing teeth. Then, after enough of their broken cogs filled the clock, and the hands told the wrong time, and the bells no longer chimed, and the gears ground to a halt, these people would stand back and say, “See? We told you so! The clock is the problem! The clock is broken!!!” And their plan started to work…. Even people who really needed the clock started believing and repeating, “The clock is the problem! The clock is broken!!!”

But the clock wasn’t broken. It just had some broken parts in it–Parts that were intentionally chosen in an attempt to do as much damage to the clock as possible–Parts that prevented the clock from working like it was designed to work–Parts that needed to be replaced. Luckily, the designers of the clock gave the people the power to replace parts of the clock that didn’t work. And thankfully, the people of the town understood that even though the clock didn’t always run smoothly, the solution was not to tear it down–despite what the people in the gated communities said…. The solution was to FIX it.

And that is what the townspeople decided…. No more falling for the tricks and lies of the rich, who utilize all of the advantages the clock affords them without feeling any sense of obligation to repay the society that allowed for their success. No more choosing people who are intentionally planting broken cogs in the gears of the clock–People whose goal is not a functioning and helpful clock, but who instead count it as victory when yet another person throws their hands up in frustration and gives up hope that the clock can help anyone. No more living like a powerless servant to the few people with all the money. Instead, they realized that they WERE powerful–Their numbers made them very powerful. They remembered that the clock was there to help EVERYONE…. Not just the ones who can afford it. And they decided to fix the clock. What do you decide?

This entry was posted in 2) Politics and tagged Political Allegory, Tax the Rich, Tea Party, The Parable of the Big Clock, Worker's Rights. Bookmark the permalink.

9 Responses to The Parable of the Big Clock