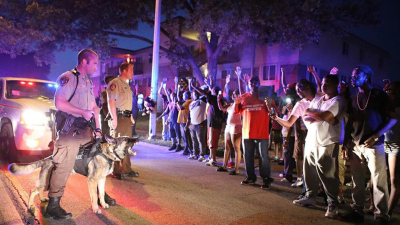 There are plenty of things to be critical of about what is happening in Ferguson, MO right now…. Too many things to count. The thought of trying to to point out all of the messed up things about that situation makes me feel incredibly overwhelmed, but mostly just sad. I cannot tell you how tired I am of white America looking for the reason–even expecting the reason–for why YET ANOTHER young black man has been gunned down and killed (for a really insightful take on this issue, you should read my friend’s blog HERE). And then, when they find a reason (like finding out that Trayvon Martin had smoked pot before), there’s this disturbing sigh of relief…. Like, “THERE is is…. That’s why he got gunned down.” I don’t know if Michael Brown stole some Swisher Sweets from a convenience store or not, but even if he did, stealing cigarettes is not a reason to get killed. The militarization of our police force has got to stop. The filling of our prisons with young black men who are convicted of non-violent crimes has got to stop. The profiling of African Americans, and the “What did you say to me, boy?” way of dealing with black youth by some people in law enforcement has GOT TO STOP.

But here’s an important thing to remember: Most police officers are really good people who really are doing their jobs the right way. The police motto is “To Protect and Serve.” There are all kinds of police officers out there who are doing just that. They are building relationships with communities, and they are building trust with people…. Without tear gas or rubber bullets (which are at least better than real bullets) or riot gear. It is easy for us to focus our attention on images of brutality, but that is not the norm. Here are a few reminders that there are so many police officers out there who are making good decisions and preserving the peace…. All while sometimes putting themselves in harm’s way:

HERE IS AN OFFICER LOSING A DANCE OFF…. BADLY

From a Facebook comment: “in a time when our hearts are in despair and we are bombarded with bad news, it is the human spirit and acts of kindness who really define who we are. God bless!”

HERE IS AN OFFICER WHO WAS CAUGHT BUYING A KID SOME FOOD, JUST BEFORE HE WAS SHOT AND KILLED MINUTES LATER

AND LAST BUT NOT LEAST, HERE IS AN OFFICER WHO KEEPS HIS GUN IN HIS HOLSTER, WHO ENDS UP BEING HELPED BY A HOMELESS MAN

Where institutionalized racism and prejudice and injustice are present in communities, we all need to come together and call it what it is. We need to stand together–whatever we look like, and wherever we come from–and loudly proclaim that it is not okay. I believe that the folks in Ferguson have every right to be angry. And a case could be made that they have every right to hit back. But just like Martin Luther King, Jr. said before a protest in Alabama, “Blood may flow in the streets of Montgomery before we gain our freedom, but it must be our blood that flows, and not that of the white man. We must not harm a single hair on the head of our white brothers.” This is the path to peace. And, more importantly, it’s the path to reconciliation. God, where we see videos of angry black youth looting stores and lighting fires and we think, “They’re all like that”–FORGIVE US! And God, where we see videos of police officers using intimidation and excessive force and we think, “They’re all like that”–FORGIVE US! For every time we look at the actions of a few–whether the thing that makes them different is a color or a nationality of a religion–and we think to ourselves, “They’re all like that,” God, forgive us! And change our hearts…. Beloved, let us love one another!

Leave a Reply to Sara (Turning Pages: Of Books and Life) Cancel reply