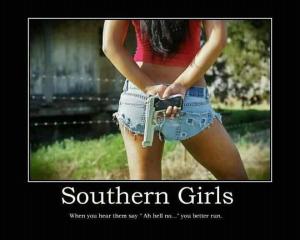 Things are getting more and more dangerous out there, people! Everywhere you look, there are people dying–firing range instructors getting shot by a nine year old girl with an uzi, unarmed teenagers in Missouri…. It’s EVERYWHERE! Now, there might be some people out there who are considering buying a BIG CAT (possibly a tiger) for protection, but anyone with any brains in their stupid head knows that the only thing that can make a person feel safer with all these people being killed by guns is…. you guessed it: MORE GUNS! Thank God above and his gun-loving son Jesus for the protections afforded us in our 2nd Amendment.

Unfortunately, it seems like everyone has a gun these days–even toddlers killing their 11 year old sisters–so it looks like we’re going to have to resort to different sorts of ARMS that God gave us “THE RIGHT TO KEEP AND BEAR” when He wrote the Constitution. Here are a few of my ideas: 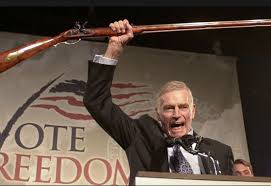 You can take my Anthrax Needler® when you pry it from my cold, dead hands!

I want a gun that fires needles that are filled with Anthrax! And I ain’t talking about the singin’ group…. We’re talking about those deadly spores. Sure, it won’t kill them right away, but stick ’em with a few anthrax needles, and they’ll die sooner or later. Maybe the gun could shoot some powder into the air as well, just in case they are wearing a needle-proof vest. Wait, do they make armor-piercing needles? If they don’t, it’s probably Obama’s fault. It reminds me of that old cautionary tale: “First they took my armor-piercing Anthrax-filled needles….”

A squirt gun filled with acid is my God-given right as an American!!! Enough of this “lead bullet” BS…. If you try to short-change me on some Swisher Sweets, from now on I’m going to squirt your stupid face with some acid. Everyone keeps talking about “non-lethal weapons.” Well, this one probably won’t kill you…. but it’ll sure scar the crap out of your face, though. And probably blind you. And thugs can’t steal what thugs can’t see…. At least that’s what my mama always said. Introducing The Acid Soaker® 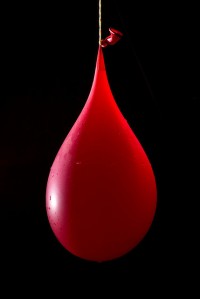 “Take one step closer and two weeks from now you will regret it!!!”

Balloons filled with Ebola-Infected blood!!!!! You think you only have to worry about Ebola in west Africa?!? Think again, criminal! You just got hit in the face with one of my Ebola Blood Balloons, sucka!! I was feeling threatened, and you kept coming toward me, and since we can now safely assume that every single person we meet has got a gun on their person, my force was justified. God himself has given me the right to STAND MY GROUND with my EBB® (And it was taut, too–It wasn’t one of those half-filled balloons that bounce when you drop them. Those limp balloons are like keeping an unloaded Anthrax Needler® next to your bed…. What’s the point of that?). Again, Ebola might not kill you–At least not right away…. They say the mortality rate is only about 60%–but it’ll sure make you WISH you were dead. 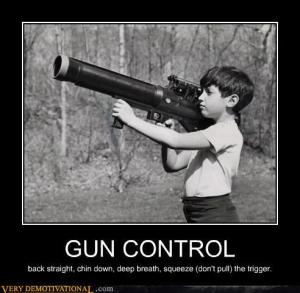 Gun control is using two hands, baby. Even with a Rocket launcher…. Even when they’re kids’ hands.

These are just a few ideas, but there are a lot of others. Like rocket-propelled grenades! I mean, why leave any evidence? It makes sense to kill people with arms that only leaves evidence that you can fit into a sandwich bag. Or a Moonraker Laser! Why aren’t these things being mass-produced? They had these things developed when freaking Roger Moore was playing James Bond…. WHERE’S MY FREAKING MOONRAKER LASER?!? Or at least one of those cool lasers from Real Genius that shot through the trees and the statue. I mean, IS THIS AMERICA, OR ISN’T IT???? And why is it that the “MILITARY” is the only one who gets to shoot Hellfire Missiles at people? What if I need to make a precision strike against a heavily armored target that is making me feel like my life is in danger!?! What am I going to do–Throw an Ebola Balloon at them!???!!!!!! Thanks a lot, Obama….