Posted on September 1, 2015 by theboeskool 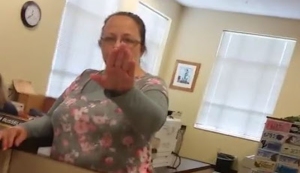 “Please…. Your freedom of the press is against my freedom of religion.”

By now, you have probably heard about a County Clerk in a little corner of Kentucky called Rowan County, who has been refusing to issue marriage licences ever since the Supreme Court ruled in favor of same-sex marriage. Her name is Kim Davis. In a statement about her refusal, she writes, “To issue a marriage license which conflicts with God’s definition of marriage, with my name affixed to the certificate, would violate my conscience. It is not a light issue for me. It is a Heaven or Hell decision.” She goes on to declare that she will not be stepping down…. “I was elected by the people to serve as the County Clerk. I intend to continue to serve the people of Rowan County, but I cannot violate my conscience.” HERE IS WHY SHE IS EMPIRICALLY, COMPLETELY, OBJECTIVELY, AND, IN ALL OTHER WAYS, 100% WRONG.

Some of the things I wrote here are ideas that I worked out on The Boeskool’s Facebook Page. If you haven’t “LIKED” my page yet, you probably should. It’s fun. CLICK HERE! Also, if you want to follow this blog, you can do that just to the right of the title. Or, you can follow me on Twitter RIGHT HERE!!