For those of you who can’t watch the video right now, the short version is this: Kathrine Switzer entered the 1967 Boston Marathon, a race that had been open only to men for 70 years, by using her initials. She ran with her coach and her boyfriend, and soon word spread that a woman was running in the race. A race official named Jock Semple (no kidding, his name was “Jock”) ran up to her and grabbed her, saying, “Get the hell out of my race and give me those numbers.” She was initially protected by her coach, but a moment later her boyfriend (a football player named Tom Miller) sent Jock Semple flying with a humungous block. A Jock Block, if you will….

When I heard this story again this year, as inspired as I was by Ms. Switzer’s athleticism (I could never run a whole marathon) and bravery, I focused on a couple different things. And, as is often the case, the things I focus on are the things I want everyone else to focus on too. So if you would, please take a look at this picture (posted today on an awesome Facebook page called “A Mighty Girl.” You should “like” them if you haven’t already): 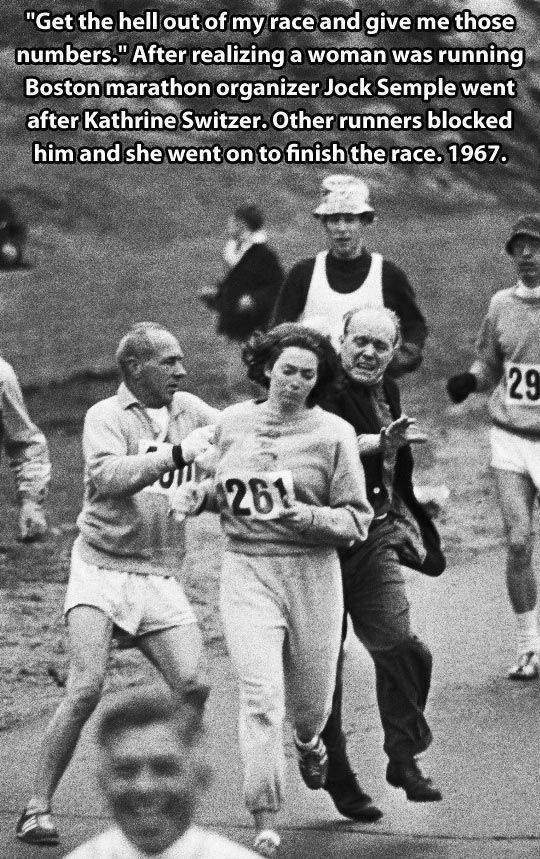 Before this moment, “Jock Itch” was actually known simply as Crotch Itch. The name was changed in honor of this event. P.S. Look at the goofball smiling in the foreground….

As I look at this picture, what I can’t help think about is the importance of The Ally. There are always times in life when a group is discriminated against. And when this group realizes its own strength, and organizes, and rises up on its own to demand equal rights, THAT is the coolest. But there is nothing wrong with getting some help. And many times that help comes from someone who is already part of the group with the power. It makes me think of a kid in “the cool kids” group who has the courage to speak out against the bullying that leaves so many feeling constantly left out. It makes me think of whites and blacks marching side by side in Alabama. It makes me think of Christians who dare to question and challenge and stand up to an official policy of exclusion toward our LGBT brothers and sisters. If not for this coach, this story might not have had the sort of ending that inspired thousands of women to challenge the status quo in athletics. Not to mention this guy: 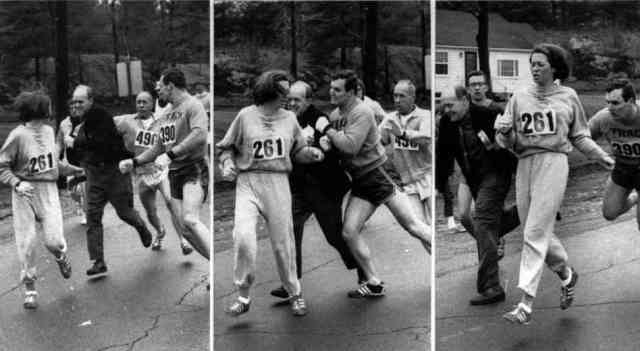 Some Allies stand between the oppressor and the oppressed, and some Allies throw a giant, running Jock Block.

Kathrine goes on to finish the race–her numbers still intact–but the story doesn’t end there. She was instrumental in lobbying the IOC to have the woman’s marathon included in the 1984 Olympics. She inducted into the National Woman’s Hall of Fame a few years ago. And in 1974, she went on to win the Boston Marathon, two years after women were officially allowed to participate. And here’s the second thing I’d like for you to focus on:

Sometimes redemption turns up in the most unlikely places….

This is a picture of Kathrine and Jock before the start of the 1973 Boston Marathon. And here’s what this picture speaks to my soul: When I think of the person who bullies, when I think of the bigot, when I think of the homophobic Christian…. THIS is the destination. Part of the destination is getting oppressed people the rights they deserve–OF COURSE! But another part of this whole process of loving our enemies is the hope of someday turning our enemies into our friends. May we all find the strength to be an ally to somebody who really needs one. And when we encounter misguided ignorance, like some old dude named Jock Semple trying to tear the numbers off a runner’s chest, we look forward to the day when he sees the error of his ways, and we put our arms around each other, and we smile for the camera. “Beloved, let us love one another, for love is from God, and whoever loves has been born of God and knows God.”