Christians: Here’s What To Do If Donald Trump Has You Feeling Hopeless

Okay. So we know what we’re up against. Many of us have been walking around thinking, “No Freaking Way this guy can win. People are smarter than that. We are better than this!” But this election process is showing us that we were wrong. There are a whole lot of people in this country who are not–in fact–smarter than that. As one of my friends wrote (who has a cool blog RIGHT HERE, where each day he writes about someone he loves in his life), “I think what troubles me most is based upon the numbers, I must actually know people who may have voted for that guy.” Believe me: It’s troubling to me too. It is disturbing. And disorienting. I have SO MANY republican friends on social media… and I know of ZERO people who actually, openly support Donald Trump. And judging from my Facebook feed, they all seem to be a horrified as I am about this situation we find ourselves in. 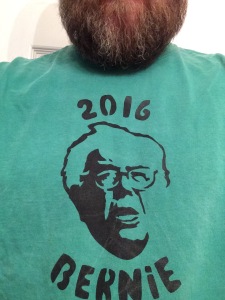 Me & my beard, feeling the Bern…

Now–before I go on–a few things I should tell you: I support Bernie Sanders. I think it would be great for a woman to be president, but my support of Bernie Sanders has nothing to do with his gender, and everything to do with his integrity. I simply see a whole lot of evidence of him being a very good person. He’s a person who has been consistantly led by his conscience and his moral compass, and he–more than any other candidate–addresses one of the main issues I see as a threat to our democracy and our country: Corruption and big money being involved in the political process. He speaks of a political revolution that is needed in order for the people to take back control of the policies that continue to help the wealthy while pushing the poor further into poverty. He shines a light on the corporate welfare that enriches the 1%, while keeping a boot on the necks of the vulnerable people of this nation and the world. And I believe he is the best candidate for people of color… And though I’m a white guy, that means a lot to me.

But Bernie Sanders’ plan for our country has been very successfully maligned as “Pie in the sky” and “Socialist.” I think Hillary Clinton has been made very rich by the big banks that write so many of the laws that work to prevent the sort of opportunity that allows for financial mobility. She comes across as a political insider, and that is not a good thing to be perceived as right now. I agree with Robert Reich (who was the Secretary of Labor in the Clinton administration) when he says…

So at this point, it seems very likely that Hillary Clinton will be the democratic nominee for president of the United States. IT’S NOT OVER YET, but it would take a whole lot of people pulling their heads out of their asses in a big hurry, and that sort of action seems to be in short supply lately. And please don’t get me wrong… I think Hillary Clinton could make a very good president. I just believe that Bernie Sanders is a better option. And though Bernie is my first choice, I am a person who believes that when we–not only as followers of Jesus, but simply as human beings–are given the choice between “not the best” and “completely awful,” we have a responsibility to vote for “not the best.” Trump’s many deficiencies are well-documented. Regardless of political party, I believe it is important for us to unite in opposition to Donald Trump… Even if it’s only as a means of trying to prevent “completely awful” from gaining power. 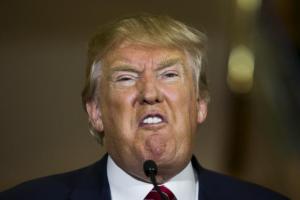 And that’s the situation we may very shortly find ourselves in: A choice between a “not the best” political insider, and a “completely awful” outsider. There is trouble ahead for the Clinton campaign, because they have not focused very much at all on any sort of push to registering new voters. The reason for this is clear… She has a very established group of supporters, and young voters are overwhelmingly in favor of Bernie Sanders… So a push for new voters would likely have hurt her in the primaries. And now many of us find ourselves in an increasingly hopeless place where it seems like the best person for actual change has run into a political machine which he seems unlikely to be able to overcome. All while a frightening brand of anger and hatred wells up in the newly emboldened racism and xenophobia of white supremacy, uniting people behind a demagogue who bows at the alter of his own name, while bewilderingly being able to dupe people who call themselves “Christians” into thinking he’s God’s choice. And I’m not sure which institution has received the most damage: The nation, or the Church.

So right now, you might being feeling hopeless. Here are a few things I’d like for you to do:

1. TAKE A DEEP BREATH. And not a deep breath like this one: 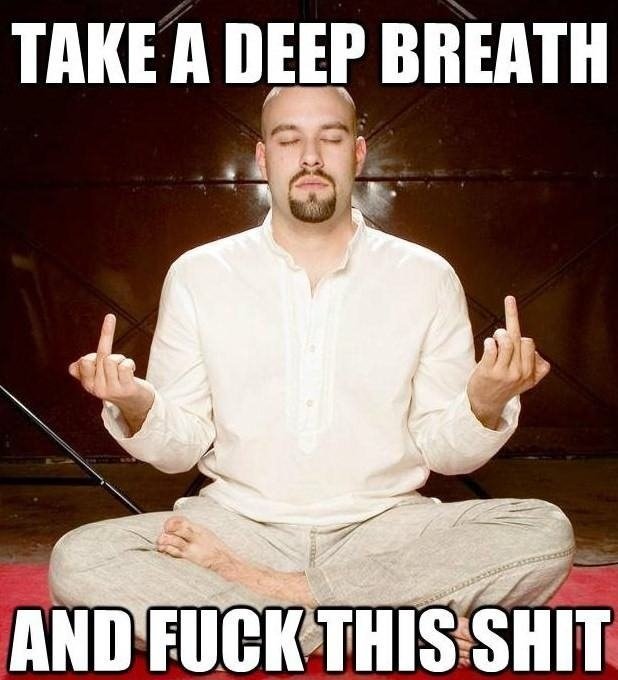 Though he does seem quite peaceful…

But try to take a deep breath like this one: Click on the link, and have your mind blown. Do it. Right now.

The picture is of our Milky Way galaxy, and it is the most detailed picture of our galaxy that humans have ever had. You can zoom in to an amazing degree. Spend some time exploring the picture… Go from one end to the other… Consider that scientists’ best estimates say there are between 100 BILLION and 400 BILLION stars just in our Milky Way… Then think about the fact that ours is just one of hundreds of BILLIONS of galaxies in the observable universe… Our little planet revolves around one of those unremarkable stars, in one of those unremarkable galaxies, and our country is just one little piece of that planet… And Donald Trump is just one little funny-haired megalomaniac walking around, yelling at people. And take another deep breath…

“Love does not delight in evil but rejoices with the truth. It always protects, always trusts, always hopes, always perseveres.” ~ 1 Corinthians 13:6-7

If you're an American confusedly watching the darkest forces of ur nation rally behind a demagogue-maybe u can understand the Mid East now.

There is a very real possibility of a dangerously deficient man winning the presidency. The people saying that Donald Trump doesn’t stand a chance of winning in the general election are the same people who didn’t give him a chance of making it through the primaries. But even if the unthinkable happens and Trump becomes president, those verses above are still true. That stuff Paul wrote about us “not being given a spirit of fear?” He wrote that stuff from prison. And this planet is still just one of many, revolving around one small dot of light among hundreds of billions of other dots swirling around a supermassive black hole, among hundreds of billions of other swirling galaxies. Together, a hopeful and inspired and loving group of people can change the course of history… We can certainly keep this hateful, delusional demagogue out of the White House.

As always, I’d like to say THANK YOU to the people who read and share the stuff that I write. Thank you especially to my Patrons. If you’d like to join this group of people who give a few bucks a month to help support this blog, you can do that RIGHT HERE. Otherwise, if you’d like to give on Pay Pal, you TOTALLY CAN. Someone named Alison Pierce did that, for no other reason than because she is completely kick ass. THANKS!

3 Responses to Christians: Here’s What To Do If Donald Trump Has You Feeling Hopeless