The Morning After The Election: 3 Reasons To Be Hopeful

Posted on November 7, 2018 by theboeskool

After the results of the 2016 election started coming in and it became clear that the country was electing an awful, awful man to lead our country, I felt way more than just “disappointment.” I experienced a sort of existential crisis. One of my core beliefs is that humanity is obviously screwed up, but that — little by little — we are improving. That we are learning from our mistakes. That we are getting BETTER. It’s the belief that even though the moral arc of history is long, it is bending toward Justice. And the fact that so many people in this country were even CAPABLE of voting for such a clearly horrible human being made me question that whole moral arc. So it was with quite a bit of trepidation and uncertainty that I tuned in to watch the returns last night. 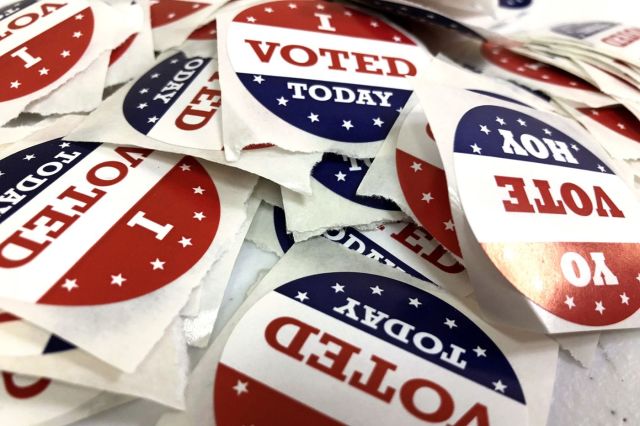 At least I voted… Unlike some of you A-Holes.

After some initial feelings of dread, I went to bed feeling hopeful. There were definitely wins AND losses. Let’s start with some of the reasons to be hopeful…

A GROWING MAJORITY. Yes, republicans picked up Senate seats in this election, and that sucks… But have you seen the actual numbers of people who voted? Check this out…

And these numbers are trending UP. More and more people are realizing the revolting nature of this republican administration. And though it is an injustice that this is the way things work (currently… we have the ability to change it) — and even though the Electoral College is a relic of an unjust time where slave-owning states wanted more representation — we can be encouraged that MORE AND MORE people, percentage-wise AND in actual numbers, are voting FOR equality & justice, and AGAINST the party of the narcissist who is splitting his time between the White House, political “rallies” that mirror Klan gatherings, and his golf courses.

And what’s even MORE encouraging is that young people are voting in higher numbers… They can smell the hypocrisy of this GOP administration like a fart in an elevator. And that is good news…

In ‘16, with presidential turnout, Hillary Clinton got 3,877,868 votes, and lost Texas by a smaller margin than Obama, Kerry, and Gore.

MORE VOTERS. In addition to larger numbers of people voting in this election, larger number of people are going to be ABLE to vote in the next election. Voter suppression is the political embodiment of people in positions of power clinging to their privilege. When more black and brown people vote, white people’s votes “weigh” less. When more young people vote, the votes of middle-aged homeowners “weigh” less. When people who have been convicted of crimes lose the right to vote, and when black and brown people are convicted a much higher rates for the same crimes, it makes the votes of white folks “weigh” more. And when steps are taken (by the man who is running for Governor, who is inexplicably also in charge of the election process) to to ensure that lines in urban areas of Georgia are unreasonably long, it makes the votes of the white folks living in rural areas “weigh” more. And when your vote weighs more, that is a privilege people cling to and fight to protect. A while ago, I wrote a post titled, “When You’re Accustomed To Privilege, Equality Feels Like Oppression.” More voters, more immigrants becoming voters, and more voting equality FEELS like oppression to many people who have grown very accustomed to their privilege. This is why republicans fight so much to make it harder for people to vote.

But in some key places, voters approved changes that ADD voters and make it easier for people to exercise their right to vote. In Florida, voters approved Proposition 4, which restores the voting rights of more than a million people who have committed non violent felonies and have completed their sentences. Adding 1.2 million people to the voter registry is always a good thing… But it’s especially a good thing in a state where the following is true:

I swear Florida could be voting between ice cream and a kick to the head and the results would be 50.5%-49.5%.

In addition to this, voters in Nevada and Michigan adopted AUTOMATIC VOTER REGISTRATION. This means that if you are a resident of the state, and you are of legal voting age, you are automatically registered to vote. Makes sense, right? How could anyone be against this? Why would anyone put barriers and hurdles in front of citizens fulfilling their right and duty to vote? The only reason is because they are desperately clinging to their dwindling privilege. And And one more…

THE WOMEN’S WAVE. Last night was probably more of a Women’s Wave than it was any sort of “Blue Wave.” This is easily the biggest reason for me to be hopeful. As far as I’m concerned, the more women in positions of power, the better (not counting Marsha Blackburn, of course). So this election was historic. Or HERstoric, I suppose…

For the first time ever, over 100 women were just elected to the House of Representatives. And even though it was historic — even though it was a step in the right direction — we are STILL SO FAR from where we need to be in this country with gender equality in our representation. Still… So much to be hopeful for. There are TWO Muslim women who have been elected to Congress… Which led to one of my favorite tweets of all time:

If you feel sad today, just imagine Mike Pence swearing 2 women into Congress with the Qur'an

And the people of Kansas have elected a Native American woman who is also a lesbian. This is AMAZING. But again, even though it is a step in the right direction, there are still so many more steps to go…

There are also reasons to be sad… The Mourning After, if you will. There are still a whole lot of people in this country who are willing to vote for some of the worst examples of humanity we can come up with. White supremacist Steve King was reelected in Iowa. Voters in Florida failed to elect Andrew Gillum, the candidate who was clearly more qualified and impressive, and instead elected a racist, xenophobic bag of flop sweat as their next governor. Not even someone as impressive and articulate as Beto O’Rourke could inspire the majority of Texans to pull their red state heads out of their asses… But some parts of the country are so blindingly red that they would rather vote for a dead pimp than vote for a democrat (which actually happened in Nevada, though given the choice between electing a dead pimp and Ted Cruz, admittedly I’d probably choose the dead pimp too). So many white women still haven’t figured out that the GOP is not on their side. And in Tennessee, where I live, voters chose fear of immigrants, corruption, and incompetence when they chose Marsha Blackburn… Genuinely one of the worst people on the planet. There are other losses… And other wins. This does a good job of summarizing how I feel today…

I think, on the whole, I came away from last night feeling more optimistic about the country as a whole (more diversity! accountability! rejection of Trumpism in popular vote!) but sobered about the realities of racism here in the white, Christian South….

But what we do now is we get back to work. We keep having difficult conversations… We keep highlighting the examples of corruption and hypocrisy and immorality we see… We keep calling out white supremacy where we see it, and we keep educating the people in our lives about what white supremacy actually is… We keep telling the stories of vulnerable and oppressed populations, and we let those stories melt the hearts of people who are blinded by fear… We keep standing up for those who are being oppressed and looking for justice… And we get involved by showing up, writing letters, and making calls. Voting is just one part of the change that needs to take place. Take some time to be sad. Take some time to celebrate. And then let’s get back to work. We’ve got a world to change, and no one is going to do it for us.

I’ll leave you with one final reason to be hopeful. Look at this amazing picture:

When Black women show up, we show out 🙌🏿 19 Black women won judgeships in a Texas county 👩🏿‍⚖️ https://t.co/oYgupxQ6MQ pic.twitter.com/LISiuQXwvn

Thanks again for reading. I needed this. If you’d like to support this blog, there are ways you can do that. One is to BECOME A PATRON. Another is to LEAVE A TIP on PayPal. You can also share the stuff I write or follow me on Facebook and on Twitter.  Now… Let’s get back to the work of being good citizens and active participants in our democracy.

This entry was posted in 2) Politics, 5) Not Quite Sure and tagged 2018 Election, Automatic Voter Registration, Beto O'Rourke, Blue Wave, Hope, Justice, Politics, Proposition 4, Reasons to be hopeful, The day after the election, The Moral Arc Of History, The Mourning After, Voting, Voting Rights, Women's Wave. Bookmark the permalink.

3 Responses to The Morning After The Election: 3 Reasons To Be Hopeful