The Best Marriage Advice I Can Give You

In addition to writing about Jesus, Politics, & Bathroom Humor, I also work as a server in a restaurant here in Nashville, Tennessee. And if you don’t live here, you might not be aware that Nashville has become something of a popular destination for bachelorette parties. I don’t make it downtown very often anymore, but last time I went down there it was hard to take three steps without running into a group of young women in matching tank tops with writing that tells about how hot, horny, or drunk they are (sometimes all three)… And there’s probably a couple of peddle taverns in the road slowing down a bus with its top half converted into a dance floor, complete with bridesmaids screaming at a bride-to-be while she does a sultry pole dance while strolling down Broadway. It’s good, clean (if not annoying) fun…

And these bachelorette invariably end up needing food to soak up all that alcohol, so there are many times I end up as their server. They are easy to spot… Even when the bride is not wearing a sash or is the only one wearing white. I usually say something. I congratulate the bride-to-be, I ask when the wedding is, and I usually say something along the lines of “The coolest thing I ever did was get married.” And then they’ll all “AwwwWW” in that way that gets higher as it goes along… And they’ll usually ask me how long I’ve been married, I’ll tell them “16 years,” and the sound of those words still surprises me a little bit. Every once in a while, they’ll ask if I have any advice for them. The depth of my answer depends on how busy I am, how serious they seem, and how much I like them (which is usually directly DISproportionate to the presence of penis-shaped novelty straws). Besides, nothing kills a buzz like some weird server getting real with you about the struggles and joys of being married… Unless, of course, we get into topics like the stuff of this tweet:

What if there wasn’t vanilla sex and kinky sex and regular sex and weird stuff sex and there was just “this feels good” sex and “I’d like to try that sex” and “why on earth would anyone judge you for sex they’re not having with you, that’s insane” sex?

Anyway, the other night when a table sat in my section to celebrate an engagement, I wasn’t busy at all. And they seemed very serious. And I really liked them. It was just some sweet old parents taking their daughter and her fiancé out to eat. The engaged couple looked like they were in their mid-thirties. They bought a couple nice bottles of wine. And there were no penis straws at that table (at least none that I saw), so when they asked me if I had any advice for them, I gave them the full treatment. I talked until my eyes were wet with the truth. 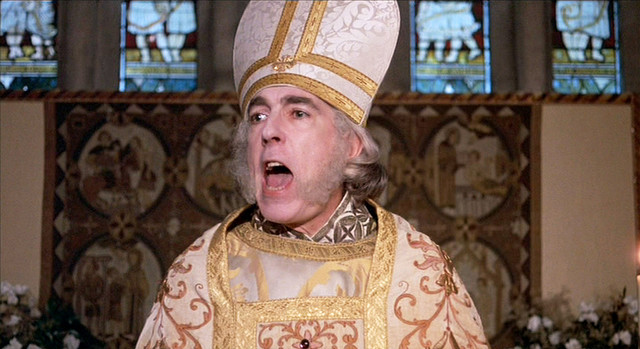 It’s what bwings us togevah…

There were three things I mentioned. The first was about the rhythm of years together: How we initially discovered the other person’s issues… Followed by the discovery of OUR OWN issues… Followed by the (hopeful) discovery that this person walking through life with you is uniquely gifted to help you grow your soul. The second was the Enneagram (which I can’t do any justice whatsoever in this format… But let me just say that it helped me more deeply understand who I am, who she is, what motivates us, and how we fit together in profound ways that I will never stop learning. It is NOT a “personality test.” It is just a bunch of collected wisdom about different types of people, and how we interact with each other. If you’re interested — and you should be — you can read about it at EnneagramInstitute.com).

But the one I want to share with you is the one that took me the longest to learn… Or to UNlearn, I suppose. Somewhere along the line, I believed the lie that in order for me to be a good husband, I had to meet ALL of my wife’s needs. I believed that if she needed something other than me, then I wasn’t doing a good enough job as a partner. And if you combine this lie with a bit of fear of abandonment and some good old fashioned human insecurity, you’ve got the makings of a toxic environment. The lie is that we have to be all things to and for our partners… Or even that we COULD be all the things they need. That lie is the seeds of jealousy. And when we believe it, if we see the one we love the most receiving Life from somewhere/something/someONE other than us, it is easy for our fears and our insecurities to interpret that as the message “You are not enough for me.”

But here is the freeing truth: You are NOT enough. I am not enough. Not enough to meet all of someone else’s needs, at least. The job of loving someone else was never meant to be about being everything another person needs… The job of loving someone else is about learning what makes them come alive, and then encouraging them to do even more of that. It’s about helping someone discover what sets their heart on fire, and then working to fan that flame. If a person you love finds fulfillment in something other than you, and that makes you feel threatened instead of happy for them, you might need a new definition of “love.”

My wife wants to go out. A lot. She gets recharged by being around people. I *like* being around people… Sometimes? But sometimes I find it exhausting. So early in our marriage, I found myself in the position of either going out with her and being exhausted, or staying home and seemingly admitting I was a failure as a partner. It’s lunacy. Why would I not want her to do the thing that recharges her? Of course I would… Even if it’s without me. Recently we were invited to a wedding. It’s REALLY hard for me to go to weddings, because most weddings are on Saturdays and that means I can’t work my Saturday shift (which allows us to afford fancy things like “food”). The old me would have had to choose between us declining the invitation and staying home (making her miserable for missing the fun, and me miserable for making her miserable), or us both going (and me making us both miserable while I obsessed over how we were going to pay the bills while being emotionally exhausted). But there is a third choice: She could just go without me. So that’s what she did. She went with our friend — a guy who is, incidentally, way better looking than me. They drove together, and they shared an Air B&B (because it saved money, and because she’s a little afraid of staying by herself out of town). It was an infinitely better choice for both of us… But it was a choice that was only available to us if I trust her and actually want her to do the things which make her come alive.

A friend posted a picture of this tweet yesterday (though in the picture she posted, the person’s name was “Domestic Goddess,” and when I looked it up to share it here, her name was changed… But the truth is still the truth, even when it comes from “Satan’s Concubine”):

What a relief to let go of the belief that we are even CAPABLE of meeting all of our significant other’s needs. For a very long time, I didn’t get this. I wish someone would have talked to me about it when I was younger — If I would have even been able to hear them — It would have saved me so much trouble. I was never meant to be the only one to make my wife laugh. Or inspire her. Or give her advice. Or be her friend. Or bring her “pleasure” (which is admittedly a weird, creepy word). Or provide support. The thought that I should or even COULD provide everything she needs leads to pain and jealousy and emotional abuse. And demanding that another human being limit her emotional fulfillment only to ME is like standing at the end of a marathon with a Dixie Cup, and getting angry when a person tells you she is still thirsty. Of COURSE she’s still thirsty… We’re all still thirsty.

I hope you liked this. I hope there are a couple people out there who needed to hear it. This is a lesson which I’ve managed to learn fairly recently, so I hope it helps. It sure is an honor that there are folks in the world who care what I write about. If you’d like to support my writing, you can CLICK RIGHT HERE to see about being a Patron, or if you’d like to leave a tip, you can do that ON PAYPAL. Check me out on Twitter and on Facebook. And if you like it, share it… Love y’all.

This entry was posted in 3) Bathroom Humor, 5) Not Quite Sure and tagged Enneagram, Fulfillment, Insecurity, Jealousy, Love, Marriage, Marriage Advice, Penis-shaped novelty straws, Toxic Masculinity, You are not enough. Bookmark the permalink.

3 Responses to The Best Marriage Advice I Can Give You