This Is How Much A Billion Dollars Is…

If you made $50k a year, and you didn’t ever spend one penny of it — you just put that money into safe keeping and saved it up — do you know how long you would have to work to save up a BILLION dollars? TWENTY THOUSAND YEARS. That’s right… Roughly 4X the length of recorded human history. Or, for my Biblical literalists and creationists out there, just a little over 3X the span of time since God created the universe and put dinosaur bones and fossils in the ground just to fake us all out.

A billion dollars is a LOT of money. If you manage to make a billion dollars, don’t plan on keeping your money under your bed… A billion $1 bills would weigh over 10 tons, and if you piled all those bills in one neat stack, it would reach somewhere around 400,000 feet into the sky — Technically into “space.” If you had a billion dollars, and you decided to spend $10,000 a day, it would take you 274 years to spend all your money. And right now, there are 2208 billionaires in the world, with an average wealth of $4.1B per billionaire — A record high. So if you’re making $50k a year, keep saving up… It’ll only take you 20,000 years to make it to a billion dollars.

And again, this is if you’re SAVING $50k a year… Not if you’re using that money to pay rent and utilities and car payments and the occasional guacamole at Chipotle. Now, some of you out there are probably thinking, “$50,000/year is not that much money.” Well, congrats, Scrooge McDuck… To a lot of us, it is. In the United States for example, the median income per capita is right around $31k-$32k per year. So if THAT’S all you’re making, you’d have to keep saving your dollars for about an extra 12,000 more years (give or take) to declare yourself a billionaire. The good news is you’re still doing way better than the worldwide average, which is in the neighborhood of $18,000/year. And when you consider that over a third of the world’s population lives on less than $2 a day (about $730 a year), there are obviously some very rich people out there. 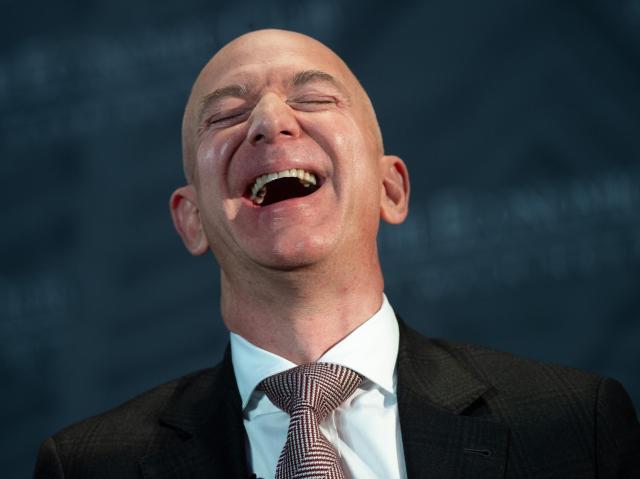 He’s laughing because his tie costs more than your car.

People like Jeff Bezos, whose net worth Forbes lists at $131.4 BILLION. Let’s just consider, for a moment, how much money that is… Let’s say Jeff Bezos was counting his dollar bills (which is a giant hypothetical, because if you were to count all day, every day, it would take about 31 years, 251 days, 7 hours, 46 minutes, and 40 seconds just to count to ONE BILLION… so multiply that times 131.4). And let’s say that every THOUSANDTH dollar bill he counted, Jeff agreed to give you one shiny penny… YOU’D GET $1,314,000. One more: Amazon has been around for 24 years. Let’s say that the bulk of Jeff Bezos’ money was earned in those 24 years. This would mean that each second of every day –waking or sleeping — ol’ Jeff is making $173.61/second. Or $10,416 per minute. Or, if that’s not impressive enough for you… About $625,000 an hour. <– That’s how much he makes while he’s SLEEPING AT NIGHT. If he slept for eight hours, he made $5 million. Okay, last one… If you took Jeff’s $131.4B and put it in a savings account with a 2% APY, the interest alone would earn you $2.6 billion per year.

Then, after all that, consider that last year Bezos’ Amazon reported a $129 million tax REBATE, effectively making its tax rate -1%. And I get it — Amazon (like Netflix, which paid zero dollars in taxes after making a record $845M in profits) is just taking advantage of tax loop holes which are there by design. So the point of this is not to say that Jeff Bezos or Amazon is the Devil… Although, paying yourself more PER MINUTE (adjusted for an 8 hour work day) than what your median employee makes IN A YEAR (the median full time employee working for Amazon made $28,446 in 2018) is certainly a colossal act of immorality. The point I’m trying to make here is this:

YOU. ARE. BEING. SWINDLED.

The republican party is not the party of anything resembling “fiscal responsibility.” The republican party is about nothing more than worshiping the rich while demonizing the poor (and immigrants, and Muslims, and People of Color, and people who are LGBTQIA). The national deficit has ballooned under this administration. Trump said he could eliminate the national debt “over a period of eight years.” Instead, the debt has risen over 2 TRILLION DOLLARS in just two years, and thanks to the republican tax cuts for the wealthy and a fiendishly immoral budget, the man who used to bankrupt casinos looks to add $9.1 TRILLION to the national debt over 8 years… As the super rich enjoy record profits. All this while the average tax return for poorer and middle class folks in America is down 17%. Republicans will say things like this…

Republicans: Let Americans keep more of their own hard-earned money
Democrats: Take away 70% of your income and give it to leftist fantasy programs https://t.co/NxJPSCqvrt

But republicans are not “for” letting people keep more of their hard-earned money as much as they are AGAINST systems and programs designed to promote equality & even the playing field. So when Alexandria Ocasio-Cortez talks about raising the top marginal tax rate to 70% under the “Green New Deal” to help fund the process of combatting man-made global climate change and creating green & sustainable jobs, republicans would like you believe that this “leftist” witch wants to take 70% of every dollar you make. This is beyond deceptive. It is a lie designed to scare people who don’t understand Marginal Tax Rates. Please take 2 minutes and educate yourself by watching this video:

Here are the marginal tax rates by president (since WWII) for the top income brackets:

And we can see that as the top marginal tax rate decreases, so does the strength of the middle class… The rich get richer, and the poor get poorer. And they give any attempt to correct this trend the evil & scary-sounding moniker of “Socialism.” But during the biggest economic boom the United states ever experienced, the marginal tax rate for money earned over $200,000 was OVER NINETY PERCENT… As was explained by Dutch historian & author Rutger Bregman at the World Economic Forum in Davos. PLEASE watch this amazing video (and also enjoy watching Winnie Byanyima artfully destroy the former CEO of Yahoo).

So where am I going with this? In America, we are currently able to vote to remove officials who support policies which reinforce unjust systems. Let me give you an example of one of these systems: We find the money to spend more on military spending than the next ten countries COMBINED…

As you wonder why you can't afford to send your kids to college, keep this #MilitarySpending chart in mind… The U.S. spends more on military spending than the next 10 countries COMBINED. pic.twitter.com/96ZfZejAao

… but people act like young adults are wanting “something for nothing” when they want to change a system which forces so many kids to graduate from college with $80k – $100k of debt. In America right now, there is over $1.5 TRILLION in outstanding college debt. In addition, the poorer you are, the more you have to pay for higher education. A person with all kinds of money can simply pay $30k for their kids to go to college for a year… Poorer families are forced to take out college loans and pay back interest. So for a college loan of $30k (at 6% interest), poorer folks, who end up on a payment plan, end up paying $39,967 for the same year of college. THIS IS A SYSTEM DESIGNED TO PREVENT ECONOMIC MOBILITY. By design, it is meant to protect the power and privilege of the ones with all the money.

And like the man on the video above, the rich will flaunt a low unemployment rate like it means people are happy. People aren’t happy… People are scared. Sure, most everyone has a job, but no one can afford anything. Healthcare is unaffordable for most people. A year of college costs about as much as most people make in a year. Our schools continue to fail, as people with money either put their kids in private schools or move to whiter neighborhoods & counties. States continue to pass legal barriers to unionization, and big companies (and the billionaires who own them) move their businesses to those places because they are considered more “business-friendly,” allowing their stock prices to go up, and making them ever richer. And then those same people use their obscene wealth to get people elected who will appoint “business-friendly” judges and pass laws which even FURTHER expand income inequality… Making an increasingly uneducated electorate even MORE scared, and more easily manipulated into voting for dishonest, narcissistic tyrants who are willing to exploit those fears. And on and on and on…

And to top it all off, it’s getting rarer and rarer to find someone with an attention span long enough to read 1600 words in a blog post, or even watch a four minute video… Let alone read an entire book on a complex problem with a complex solution. Meanwhile, we’ve got a lying moron in the White House who is calling the press “the enemy of the people,” and scores of spineless republican representatives silently looking on as an inept, immoral billionaire attempts to destroy a once great nation under the guise of making it “Great Again.”

Things are not good, and sometimes it seems like they are heading in an even worse direction. For example, the fact that whole groups of people would go to the polls and continue to elect an awful human being like Mitch McConnell should give us all reason for genuine concern. But the good news is IT DOESN’T HAVE TO BE THIS WAY. The good news is WE CAN FIX THE THINGS THAT ARE BROKEN. The good news is WE HAVE THE POWER TO CHANGE THE SYSTEMS WHICH DISPROPORTIONATELY BENEFIT THE RICH. The good news is that WE CAN VOTE THESE A-HOLES OUT. Together, we can make the crooked places straight, and we can raise the valleys & make the high places lower. We can enforce policies which plow money back into the lives of the people on whose backs the billionaires made their fortunes. And when we look at a system which creates CEOs who make more in a minute than their workers make in a year, we can stand together and call that system what it is: Broken. Harmful. Immoral. And Evil.

As I was writing this, I kept thinking about the “debate” that is going on here in Nashville about giving teachers raises… Let me just say this: If you are ever in a position to vote for raising teachers’ salaries and you vote against it, you are an awful, Mitch-McConnell-level human being. They teach your smelly, ungrateful little kids how to think, and hopefully how to tell truth from a lie. If salary is just a number representing how much society values the work you do, we need to start paying these people better. They are heroes. I say TAX THE RICH, AND GIVE THE MONEY TO TEACHERS. And speaking of money, if you’re a billionaire (or a regular person) who’d like to support this blog as a Patron, you can DO THAT HERE. If you’d like to leave a tip on PayPal, you can CLICK HERE. Also, you can follow me on Facebook and on Twitter.

2 Responses to This Is How Much A Billion Dollars Is…