Four Reasons Why School Vouchers Are A Terrible Idea

I have spent the last five mornings standing next to the road in front of my kids’ school to show my support for the public school teachers who give their time and energy to teach my weird little kids how to not be dumb. Most of us are wearing #RedForEd. We’re a pretty eclectic group. So far there has been an inflatable T-rex, Waldo, a human “Floaty Guy” (as my kids call them), a whole lot of kick-ass moms, a few kids & dads, and a Roman Emperor of some sort, who wears a red cape and shouts “Honk, as your Emperor commands you!” and asks the prescient question, “Are you not entertained?!?”  We basically stand out there with signs (turns out my wife’s spiritual gift is making protest signs), and we encourage people to honk their horns if they think that public schools should be fully-funded, and if they’re AGAINST pulling funding from public schools to pay for kids to go to private schools… AKA “Vouchers.”

We had a whole bunch of teachers, students, parents, and community members coming out, honking horns, and wearing # RedForEd To show their support for public schools & say NO to the vouchers that will hurt Tennessee kids. pic.twitter.com/FP2EYVYVs5

All around the country right now, there are attempts being made to push legislation for “vouchers” which can be used for kids to attend private schools… essentially taking the money earmarked for their public schooling, and giving those funds to private schools. If you are living in a state with a republican-controlled legislature, chances are good they are trying to pass laws legalizing school vouchers. In Tennessee, where I live, Governor Bill Lee knows that “Vouchers” don’t have a very good reputation, so he is dishonestly attempting to rebrand them as “Educational Savings Accounts.” But make no mistake — They’re vouchers.

Since people might not know what vouchers are (or why they are the worst), and since you might not get that information while driving and honking at a T-rex, I’ve decided to attempt to make it a little clearer… Here are four reasons why school vouchers are a terrible idea — for your state, and for mine:

1) PUBLIC FUNDING FOR DISCRIMINATORY SCHOOLS — This should go without saying, but we should not be using public funds to pay for religious educational institutions which write discrimination into their bylaws… Schools like the one Karen Pence works at (the Vice President’s wife), which bars its employees & students from engaging in or EVEN CONDONING any “homosexual or lesbian sexual activity” or “transgender identity.” A long time ago, I applied for a job as a teacher here in Tennessee at a private religious school (Church of Christ). The application asked me to describe my faith… and only provided about four lines for my answer. It also asked me to describe my thoughts about modest dress for women… But there were roughly sixteen lines for my response to THAT important issue. I was like, “You know what? I don’t think this is a good fit,” and handed them back their application form.

Vouchers provide public tax dollars for religious schools… Schools that can hire unqualified teachers to teach kids… Schools that are allowed to discriminate… Schools who can teach whatever nonsense they want: The world is flat, geology is a satanist plot, Adam lived with a T-rex in the Garden of Eden, vaccines cause autism, earth quakes happen because God is angry about “the gays,” essential oils cure cancer, Jesus hates science, etc…  And if none of those things seem particularly concerning to you, here’s a good rule of thumb, white evangelical republicans: Imagine the religious schools that are getting public funding are Islamic schools… Does it still sound like a good idea? I didn’t think so.

2) IT’S DISHONEST — They’ll tell you that vouchers are for “poor kids trapped in failing schools,” but if that’s true, why are all the people who are pushing vouchers from the more “desirable” schools districts, and the people who are vocally AGAINST vouchers are teachers, families, and representatives from those struggling districts? They have FAILED to improve student achievement. Vouchers are pushed by people like Betsy DeVos, who dishonestly claimed that larger class-size could be better for students. The same Betsy DeVos who pushed to win “school choice” in Michigan, and then watched as STUDENTS & CHILDREN LOST in a colossal failure (the article is long, but it’s very important). The same Betsy DeVos who met with Gov. Bill Lee in a closed-door meeting to plot their plan to mislead (in every sense of the word) Tennesseans into not recognizing “Educational Savings Accounts” for what they are.

3) FUELING INEQUALITY AND SEGREGATION — There is nothing I’m going to write which will explain this better than THIS ARTICLE RIGHT HERE. Please take the time to read it. In fact, if you have to choose between that article and this one, choose THAT one. But if you don’t read it, just know that private schools are way more segregated places than public schools. For example “from the article), “In Mississippi, white students comprised 51 percent of all school-age students but an overwhelming 87 percent of all private school students. This pattern holds across Southern states that demonstrated resistance to school integration.” The growth & explosion of private schools coincided with forced integration for a reason. And as the article points out, “Sociologists have shown that for white families, ‘best’ is often shorthand for ‘white,’ even if the school in question does not necessarily evince better educational outcomes than its more multiracial peers.”

In addition, vouchers and “school choice” exaggerates economic disparities and inequality. The voucher being proposed in Tennessee is around $7300… This amount would not even cover half of most of the private schools in this area. So basically that money amounts to a tax cut for people who can already afford to shell out thousands of dollars to pay for their kid’s education. It does NOT help the folks living paycheck to paycheck… Nor the ones who don’t have a reliable car to drive their kids to school in… Nor the ones who don’t have a stay-at-home mom to drive that reliable car… AKA primarily People of Color. 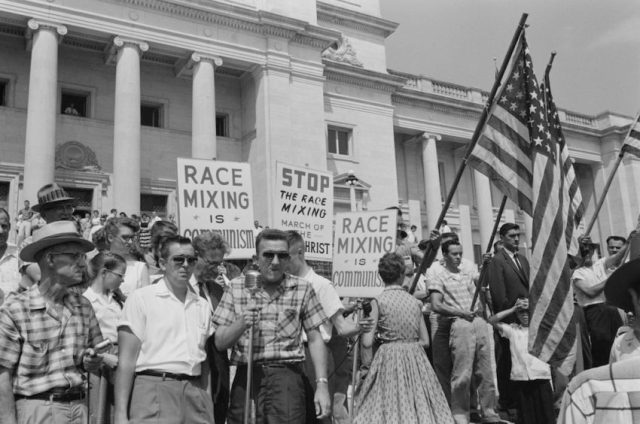 4) THE MYTH OF “COMPETITION” CREATING BETTER SCHOOLS — They will tell you that this is all about choice… that competition is good for schools… that if students are able to take their $7300 with them/away from an underperforming school, the “invisible hand of the market” will fix the problem. But what about the kids left in those failing schools — the ones “left behind,” so to speak? Education is a necessity. We don’t do this with other necessities. We don’t do this with WATER. We don’t allow competing water companies to provide water for different neighborhoods, and then hope to “weed out” the “underperforming” companies who are putting out unsafe water (unless you’re living in Flint, I suppose). Do you know WHY? Because as one water company is failing, the people living in that area are getting sick. They are dying. And THEN, we certainly don’t offer the people living in areas with the diseased water “vouchers” for water from the successful water companies’ areas. That would be insane. What we do is we FIX THE PROBLEM, so that everyone in all the areas is getting good water. We do this because water is important… Well, you know what? SO IS EDUCATION.

Teachers are underpaid, y’all. This is so messed up…

Here’s what we need to do: WE NEED TO PAY TEACHERS LIKE WE VALUE THE JOB THAT THEY ARE DOING. This Time Magazine article told a story of a full time teacher who has multiple jobs, is selling her blood plasma, and STILL is having a tough time making ends meet. The teachers I’ve been standing beside this past week are the sort of people who pour their entire lives into children in their care… OUR CHILDREN. They are the sort of people who stay up late making signs, and wake up early to stand outside in the rain and protest these stupid vouchers. They are the sort of people who inspire my kids to learn, and inspire me to stay up late writing this post. The least we can do — and I mean the VERY least — is to fully fund our public schools before we even CONSIDER the idea of pulling funding away from them so that wealthier, majority white folks can have an easier time financially sending their kids to a private school. Ugh…

If you live in Tennessee, you can call the members of the House Finance, Means & Ways Subcommittee (if you click on a member’s face, it will take you to their contact information), and tell them to vote NO on Gov. Lee’s dishonest voucher plan. Tell them that it doesn’t make sense to fix struggling schools by pulling funding from them. Tell them we need to pay Tennessee’s teachers so well that people from other states want to come HERE to teach. DO IT TODAY! There are only a couple weeks left before this bill could become law…

And if you’d like to help support my writing and this blog (and me and my family) you can become a Patron, you can leave a tip on PayPal, or you can follow me on Twitter and on Facebook.