Confessions of A Creepy Hugger: Thoughts About Joe Biden and Me

For as long as I can remember, I have been a “hugger.” And growing up in a family who wasn’t particularly physically affectionate, I kind of stood out. At my grandfather’s funeral, one of my great aunts told me a story about me being at their family’s cottage when I was a little kid, and when it was bedtime for the kids, how I insisted on going around the room and hugging each person goodnight… Even the ones who didn’t do a whole lot of hugging. I was oblivious to the fact that my hugs were out of place, but I was a kid… I didn’t know any better.

Fast forward to high school and college and beyond, and next-thing-you-know, I’m just a creepy dude who thinks he can hug whoever he wants. I can’t tell you how many girls and women I insisted on hugging… even when I sensed an awkward resistance. I would comment on times when girls would hug me while leaning over (keeping their breasts away from pressing into my chest). I would point out how stupid “side hugs” were, and insist on giving them a “real hug.” Or I would “come in for the real thing.” Or I would pick her up off the ground with my hug… even over protests. As far as physical contact was concerned, I thought I knew better than they did what they needed. I DIDN’T know better.

But here’s the thing: Adults SHOULD know better.

I can’t imagine standing in front of people at an official ceremony, and rubbing a woman’s shoulders. Can you?

Years ago my wife told me about an incident which she observed at a friend’s house. I had greeted a friend’s wife by hugging her and picking her up off the ground. While I hugged her, my wife saw her make a face to her close friend… Kind of a cross between a “Please help me” face and an “Oh great, here we go again” face. My wife was embarrassed… For me, and for herself. When she told me, I probably responded with some sort of “Aw, c’mon” or “That sounds like her own issue.” At some point, she told me that I needed to ask people before I hug them, and I was like, “Really? That seems pretty weird.” I think I said, “People need hugs.” And she yelled at me, “YOU DON’T GET TO DECIDE THAT! YOU DON’T KNOW HER STORY!” (As an aside, I’d like to say Thank God For Strong Women)

And the thing is, I BELIEVE that people need more physical contact. I believe it is a good and beneficial thing for human beings to practice… But if I am imposing those beliefs on other people, that is NOT good. It is NOT beneficial. It is harmful. We are subjecting women to daily indignities. And it might not bother everyone… I have some female friends who are like, “PLEASE give me one of those good hugs.” But the existence of women who are not bothered by your unsolicited shoulder massages doesn’t excuse you rubbing some woman without her asking you to. Just like the fact that you have a “black friend” who isn’t bothered by your racist “jokes” doesn’t allow you to impose your racism on everyone else without consequences.

Anyone who knows me knows I would never intentionally cause harm or distress to a woman by making her feel uncomfortable with physical contact. But there comes a point where my refusal to listen to the things women are saying renders my “intent” worthless. Women all around us are standing up and saying, “Hey. Asshole. I am in charge of my own body, and you don’t get to touch me without asking.” And if they’re not saying it that directly, they are saying it with their actions. It’s a no-win situation for women, really…  If they ARE saying it that directly, they are labeled as a “bitch.” And if they aren’t being that direct (and trying to be “nice”), then it’s the woman’s fault for not letting him know.

Women’s bodies are NOT communal. Maybe we should say that as many times as it takes to allow it to sink in and become the Truth… 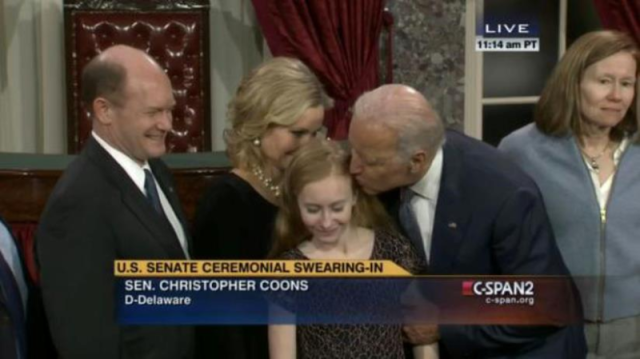 Seriously… Look at every single person’s face in this picture. Each of the five faces tells a story.

There are now FOUR different women who have come forward saying that Joe Biden’s inappropriate touching has made them feel uncomfortable. I am 100% certain there will be more. None of those women have accused Joe Biden of sexual assault. But as Jessica Valenti writes in her amazing article, “Is it really asking so much that our standard for treating women well goes beyond ‘don’t sexually assault’ and ‘don’t pull your dick out at the office’?” The fact that no one has accused him of sexual assault (like so many have accused the current president) does not change the fact that his touchiness with women is a problem. And it’s a problem he needs to take ownership of.

And yes, I am aware of Joe Biden’s work fighting sexual assault and violence against women… But that should be even MORE of a reason for him to have long ago changed his handsy habits. There is plenty to be concerned about without even mentioning Biden’s refusal to take ownership of the role he played in the humiliation of Anita Hill and putting the sexual assaulter Clarence Thomas on the Supreme Court. He recently said, “I regret I couldn’t give her the kind of hearing she deserved… I wish I could have done something.” Which is different than him taking responsibility — as the CHAIR of the Senate Judiciary Committee — for what happened.

It literally does not matter what else Biden says about sexual assault if he cannot acknowledge his own culpability in putting a sexual assaulter on the Supereme Court and then pretending for years like he was powerless to stop it. #BelieveSurvivors #IBelieveAnita

He has said he owes Anita Hill an apology, but Anita Hill has yet to receive one.

And for those of you who are all “Why are we just hearing about this now?!?” Listen — I don’t know if there are women out there who feel violated by my insistence on a “real hug.” If there are, I doubt they are feeling the need to make my creepy actions public right now… But if I were being considered for a powerful position as a congressman, a Supreme Court Justice, or the freaking president, it would not be at all surprising for them to come forward. Do I think that my creepy-ass hugging past should disqualify me from ever holding a political office? No. However — AND PAY ATTENTION HERE — If I refuse to take ownership of and responsibility for my past actions and creepiness, that SHOULD be disqualifying. The same is true for you, Joe.

It should be mentioned that a photocopied picture of Joe Biden’s wrinkled, white ass — made while sitting on a printer — has more character, integrity, honor, and ability to lead this country than Donald John Trump. And if Joe Biden somehow makes it through the primaries and is the only legitimate chance of removing Trump from office, I will rally around him and run to the poles to vote for him… And you should too. But right now we are not comparing Biden to Trump. We are comparing Biden to the other democratic hopefuls. I believe there are many better choices for president than Joe Biden… And when one is picked, I can’t wait to vote for her.

Thank you so much for reading. I am honored that there are people in the world who appreciate and value this blog enough that they are willing to support it financially. If you would like to become a Patron and give a little each month to support me, you can DO THAT HERE. If you’d like to leave a tip on PayPal or pay to boost a post, you can DO THAT HERE. If that’s not an option right now, you can help out by sharing this post. Or you can follow me on FACEBOOK of on TWITTER. I love you people…

1 Response to Confessions of A Creepy Hugger: Thoughts About Joe Biden and Me