The Case Against (and For) Mask Shaming

I have seen many people making the case that we shouldn’t be shaming people for not wearing masks when they go out. “You don’t know their story,” they say. “They could have a legitimate reason for not wearing a mask.” People bring up claustrophobia, anxiety & panic attacks, asthma, sensory issues, and assault trauma (where someone’s mouth was covered during an assault). The claim is that there are many other reasons (other than being a conspiracy theorist or an anti-science moron) for people to not wear masks. There are even accusations of ablism… That expressing frustration and anger pointed at people without masks on could be a discriminatory act against people with a disability which prevents them from wearing a mask.

I confess that I have been guilty of calling people morons for not wearing a mask. When I see people not wearing a mask in stores that are requiring them, it makes me angry.  I see tweets like this one, and — to be honest — it makes my heart sing a little bit…

OMG Have y’all been reading about all these people being rushed to the hospital for mask injuries?

Of course you haven’t, you fucking idiot. #WearADamnMask

I admit I’ve never even considered that some of these people might have experienced abuse which causes wearing a mask to trigger a panic reaction. I make assumptions… About their reasons, their intelligence, their political party. I do not give these people anything close to the “benefit of the doubt.” I even find myself assuming psychopathy and narcissism (there is some research surrounding this). I don’t see phobias or trauma… I usually see ignorance and selfishness.

But there is a reason for that: It’s because the vast majority of the people refusing to wear masks do so out of ignorance and selfishness.

Some of this “ablism” talk defending those who don’t wear masks feels very similar to the arguments around “Not all men” and “Not all white people” and “Not all Christians.” Namely, the idea that we shouldn’t make critical statements about a group, because SOME in that demographic might not fit the description. So if a woman criticizes men because of toxic masculinity, a chorus of voices declare that “not all men” are toxic… As if that is what was being said. White people have the same fragile reaction to criticism (Now think… Did you hear me say ALL white people have that same fragile reaction?). When Christians hear criticism of the church, many feel the need to clarify that “not ALL Christians” are like that. It’s easy to see why the most fragile of all God’s creatures — the white, male Christian — feels so persecuted… Even though they aren’t. 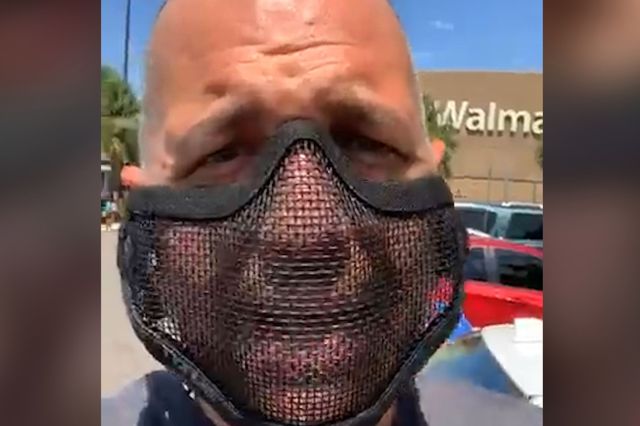 Someone PLEASE tell me it’s alright to call this fragile, oppressed dude a “moron.”

NO ONE thinks that the majority of the people refusing to wear masks have legitimate medical reasons for it. And if they DO have legitimate medical reasons for it, we need to do some serious testing as to whether MAGA hats cause breathing problems, because I’d say that 95% of the people who refuse to wear masks in stores are trump supporters, and there is a correlation there that implies causation. And then they insist that it is against HIPPA and ADA privacy laws to ask someone to have to prove their medical condition for going without a mask. But HIPPA and ADA privacy mandates are mandates, just like mask mandates are mandates… And MANY of these folks are the same people demanding that victims of rape or incest be forced to relive their trauma and “prove” that their assault happened before allowing her and her doctor decide to end her pregnancy. Isn’t that interesting… And by “interesting,” I mean hypocritical.

As someone with a profound disability, it's disgusting to me that people are using the Americans With Disabilities Act of 1990 to justify avoiding a minor inconvenience

These badly misspelled cards & their card-carrying members are using disabled people as shields to harm others pic.twitter.com/dNt8zWZ56z

Imagine a young man wearing a t-shirt with a big swastika on it and he’s got a shaved head. Now, if you called this guy a nazi skinhead, there’s a CHANCE that he actually wanted to wear his Human Rights Coalition Equality shirt, but his house was on fire and he had to grab a shirt quick… And perhaps alopecia is the reason for his head having no hair. But chances are very, very slim. And the idea of not letting nazi skinheads know that our norms do not allow harmful & threatening expressions of hate simply because of the possibility of him being a person living with alopecia who hurried from a fire seems ludicrous to me. When you consider that instead of free expression, we are dealing with a virus that kills about 1.4% of the people who are infected with it, there is even a more urgent reason to speak up about establishing norms.

Because that’s what we’re doing: We’re establishing norms. It’s not about shaming people for shaming sake… It’s about letting people know that they are not complying with standards the community has decided are in the benefit of public health. You might think it’s your “god-given right” to rub pig shit all over yourself before going out to Walmart, but that doesn’t mean people don’t get to plug their noses when you walk by. And if it turns out that pig shit is causing a bunch of people to get sick and die, I’ve got news for you: Walmart has online ordering and pickup. USE IT. Same goes for the folks who can’t wear a mask because of trauma: Make other arrangements. Just about every grocery store has the option to order your groceries online. Use that option. Have it delivered. Do curbside pickup. Ask a friend for help. SOMETHING.

So for the small group of folks who have legitimate medical reasons for not wearing a mask, I’m sorry if I have incorrectly judged you as being a conspiracy theorist, or an anti-science moron, or ignorant, or selfish, or worse… A republican. Forgive me for confusing you with all the people who are convinced masks are going to make them die from carbon dioxide poisoning… Or the lady at Panera who claimed masks don’t stop the virus because “pants don’t stop farts.” Or the lady that said she doesn’t wear a mask for the same reason she doesn’t wear underwear: “Because things gotta breathe.” But we are in the middle of a pandemic… Make other arrangements. Just because someone has a reason they don’t want to wear a mask, it doesn’t mean that person has a “right” to go wherever they want without a mask right now.

Last thing, and I don’t think this can be stressed enough: The people who are concerned about breathing because of claustrophobia, anxiety & panic attacks, asthma, sensory issues, and assault trauma should be the MOST concerned about everyone doing their part to stop the spread of this disease. If you think masks aren’t fun, you’re REALLY not going to enjoy COVID-19. If you find it difficult to breathe with a mask on, you’re going to find it REALLY difficult to breathe with COVID-19. Every person in a hospital bed who has COVID-19 has a mask on. Every one. Regardless of their anxiety or feelings of claustrophobia. Every one… except for the ones who are intubated. And if you don’t like mask mandates being shoved down your throat, you’re REALLY not going to enjoy ventilator tubes being shoved down your throat.

Oh people, thank you for reading this rant. Perhaps this will help you breathe  or laugh when you see someone flaunting their maskless face while we all try to do what we can to stop the spread of this virus. If you enjoy this blog, and you’ve been thinking “I’d really like to support that guy,” now is a great time to do that. I’m still furloughed because of the virus, and the CARES Act money runs out next month, so every little bit helps. You can BECOME A PATRON… You can LEAVE A TIP ON PAYPAL (or Venmo me at “chris-boeskool”). Otherwise, you can do me a solid and share this with the people in your lives on Facebook or on Twitter or wherever else. But most of all, thank you for reading. Peace…

2 Responses to The Case Against (and For) Mask Shaming