When I was a kid, there were Christians, and then there were Catholics–The two were mutually exclusive. I knew OF Catholics (You got your Pope John Paul II, you got your Mother Teresa…. Actually, that’s probably about it), but in the little Dutch-Reformed-Calvinist-Protestant nook of the country that I grew up in, I don’t think I ever met an actual Catholic. I may have met one or two and just not known about it–In those parts, it wasn’t the sort of thing you advertised. But as far as I was concerned, Catholics were about as foreign to my version of Christianity as the Buddhists, the Muslims, and the Jews.

It’s weird thinking about that now–How, for most of the world, “Catholic” was synonymous with “Christian,” but for me (and many others), they were just that screwy religion who prayed to Mary for some odd reason, and had all those saints, and the priests forgave your sins in a confessional after they told you to go rub a pearl necklace…. It all seemed about as far-fetched as Scientology. For so many other people around the world, the face of Christianity was the Catholic Church, but for me and many others, “Catholic” and “Christian” were very different, and the face of the Catholic Church was the Pope. And all I really knew about the Pope was that he was the dude with the pointy hat who looked vaguely like Johnny Carson…. 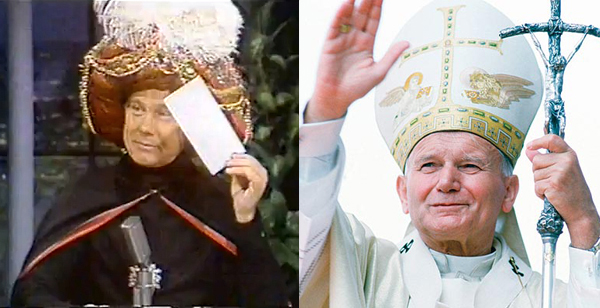 “Heeeere’s Johnny Paul 2!” –The US Women’s Soccer goalie, Francis, and Sarah Palin…. *opens envelope* “Name a Hope, a Pope, and a Dope.” HeyOOOH!!!

My how things have changed. If you can’t admit that Pope Francis is awesome, there is either something wrong with you or you just haven’t been paying attention. Just in case you haven’t been paying attention, here is a short list of 10 things (in no particular order) of some of the amazing things Pope Frank (his friends call him Frank) has done so far that make me consider converting to Catholicism: 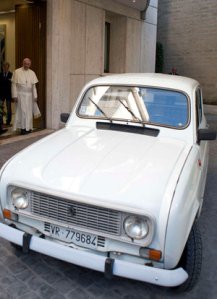 1. GETTING RID OF THE POPE-MOBILE It’s really hard to love people from behind a thick sheet of bulletproof glass. After Pope JP2 got shot, they tried to keep the Pope safe by constructing the PopeMobile, but Francis has ditched it. When he was elected, he rode with the other Cardinals in the minibus. Not only that, but instead of riding around in the the Mercedes PM, he got himself this 20 year old Renault with almost 200k miles on it for when he wants to drive to the Vatican City Taco Bell for a late night snack. It’s not near as safe, but something tells me this Pope is not too concerned about dying. In the words of Obi Wan Kenobi, “You can’t win, Darth. If you strike me down, I shall become more powerful than you could possibly imagine.” Makes sense…. Jesus rode a donkey.

2. SUGGESTING THAT HE MIGHT SEE ATHEISTS IN HEAVEN This one might ruffle some feathers. In a Homily, Pope Francis suggested that doing good might be more important than believing the right things and he said, “The Lord has redeemed all of us, all of us, with the Blood of Christ: all of us, not just Catholics. Everyone! ‘Father, the atheists?’ Even the atheists.” I know, right? Where would he get such a blasphemous idea?!? Answer: Jesus–who suggested that the Priest and the Levite (who believed all the right things) weren’t doing as good of a job of keeping the commandment to “love your neighbor” as that godless Samaritan. Another answer: The Bible–That says, “He is the atoning sacrifice for our sins, and not only for ours but also for the sins of the whole world.” (I John 2:2)

4. FIRING “THE BISHOP OF BLING” When a German Bishop named Franz-Peter Tebartz-van Elst spent $42.7 million on a house renovation (with $475,000 for walk-in closets and a $20,000 bathtub), Pope Francis suspended him. And then sent his ass to a monastery. And now they’re thinking about turning his lavish residence into a soup kitchen to feed poor people. Awesome.

5. NOT FREAKING OUT WHEN THIS KID INTERRUPTED HIS TALK Makes sense. Jesus said, “Let the little children come to me, and do not hinder them, for the kingdom of God belongs to such as these.”

6. PISSING OFF SARAH PALIN If you are making Sarah Palin feel uncomfortable, you are probably doing something right. Sarah said, “He’s had some statements that to me sound kind of liberal, has taken me aback, has kind of surprised me.” You think THAT’S liberal, you should hear some of the things this Jesus guy said….

7. TOUCHING, KISSING, AND PRAYING WITH THIS DISFIGURED MAN

You’ve probably seen this picture before, but look at it again. Imagine being this man and living with this skin condition. Imagine learning to expect the horrified looks as strangers see you. Imagine getting used to people keeping their distance. Now imagine this little old man smiling at you and calling you over. Imagine him touching the sides of your face. Imagine him pulling you in, and kissing your forehead. It is just too much for me to handle. But it makes sense…. Jesus didn’t just heal the lepers–He TOUCHED them.

8. NOT TAKING “THE POPE SUITE” AT THE VATICAN
Pope Francis asked to reside in a more modest apartment at the Vatican, and even makes his own meals. He sticks to the plain white robe, and has asked the other people in leadership to tone it down as well. He said, “This I ask you: Be shepherds, with the ‘odor of the sheep.’ Make it real.” He works hard at portraying modest living and staying humble. It’s hard to relate to the common man when you’re sitting on a golden throne. When he found out that they put up a statue of him outside a Cathedral in Buenos Aires, he asked them to take it down.

10. SPEAKING OUT ABOUT HOW CAPITALISM  SCREWS POOR PEOPLE
Just recently, Pope Francis released an “Apostolic Exhortation” that laid out poverty and economic inequality as two of the main concerns of this Papacy. He used strong terms like “idolatry of money” (reminds me of someone) and speaks of unfettered capitalism as “a new tyranny” while praying and pleading with lawmakers to work toward  providing all people with “dignified work, education, and healthcare.” Look at this crazy, Palin-Pissing-Off quote from the document: “Just as the commandment ‘Thou shalt not kill’ sets a clear limit in order to safeguard the value of human life, today we also have to say ‘thou shalt not’ to an economy of exclusion and inequality. Such an economy kills…. How can it be that it is not a news item when an elderly homeless person dies of exposure, but it is news when the stock market loses 2 points?” Seriously, Francis? Where do I sign up?

And here’s a bonus one: HE PICKED AN AWESOME NAME
He chose the name Francis after St. Francis of Assisi. I can’t even start to go into all the reasons why this other Francis was awesome, but just know he is. You can learn some more about St. Francis of Assisi by CLICKING HERE.

So yeah…. I just love this guy. But just about everybody is loving Pope Francis right now. And here’s the thing: It’s not Catholicism that is so attractive to people. It’s looking like Jesus. Isn’t it interesting how a simple little thing like acting like Jesus can get the whole world excited about the Pope? I mean, I get excited when ANYBODY–regardless of their creed–starts acting like Jesus! Gandhi, the Dalai Lama, you name it…. The truth is the truth, no matter where you find it. Christianity does not have a monopoly on the truth.The Bible DEFINITELY does not have a monopoly on the truth. The power and significance of Jesus’ life is NOT limited to the words that are written in the Bible. At the end of the book of John, he says, “And there are also many other things which Jesus did, the which if they should be written every one, I suppose that even the world itself would not contain the books that should be written.” (John 21:25) So basically, after writing all about Jesus’s life and going through 21 chapters telling about all the stuff Jesus said and did, he says, “Oh yeah, and he did a whole lot of other stuff as well. This is NOT exhaustive.”

Anyway, I love how this Pope is being an example of Jesus’ love for the world. We may have very different theologies and views on some really important topics, but our sames are way bigger than our differences. He is walking the walk. And he is a walking reminder to me that what you do and how you love is way more important than what you believe. Keep up the good work, Francis.

So, it turns out that a lot of people are sharing this post, which I think is fantastic. If you like what you have seen/read here, and you’d like to see more of it, you can subscribe to this blog at the top right hand side of this page and you’ll get an email when there is a new post. FOR FREE!! Or, if you want to keep up via Facebook, you can like my page on the righthand side as well. Or, you can follow me on Twitter at https://twitter.com/TheBoeskool –I don’t think you’ll be disappointed…. But if I do disappoint you, I’ll at least try to do it while making you laugh.

As a response to the sometimes vibrant, sometimes obtuse, sometimes loving, sometimes just plain mean conversation that  has been taking place in the comments section, I have written this story: The Parable of the Tickets To WonderLand. Many people, it turns out, are very offended at the idea that God might decide to let Atheists or people from other religions into heaven. I figure, since we don’t know for sure, it’s at least a good thing to HOPE for! Thanks for reading. I hope you enjoy it.

This entry was posted in 1) Jesus and tagged Awesome things about Pope Francis, Bishop of Bling, Capitalism, Consider Being Catholic, Getting rid of the Popemobile, Pope Francis, Pope with Disfigured Man, Sarah Palin, Washing Feet. Bookmark the permalink.