Sacrificing Our Children to the Nation-State

It's surprisingly cheap for me to feel good about myself--I "ate fresh" AND helped out a soldier. "Out of the way, people! Three heroes coming through--Me, the soldier, and my sandwich."

Not too long ago, while I was guiding the sandwich artist in the creation of my Subway sub, a man in a military uniform walked in. Man? I suppose he was a man…. If he wasn’t in a uniform, I would have called him a kid–He couldn’t have been more than a year or two out of high school. Anyway, I decided (for some reason–probably more for me to feel good about myself than to “thank him for his service,” whatever THAT means) to buy his meal. It was no grand gesture–I mean, $5 footlongs is a great time for a Dutch man to buy someone’s meal (way better than when you’re at Stoney River)–but it reassured me that I was a pretty good guy as I handed the dude at the register $10 and told him to use it to pay for the soldier’s meal. It might not have even gotten paid for–The employee might have thought that I was giving him a tip, because his English (as it seems is often the case with Subway employees) was limited. Either way….

This sort of thing happens at the restaurant every so often: A stranger buying a soldier’s meal or buying a round of drinks. It always seems like a nice gesture, but when I think about all of the things these young men and women are forced to deal with, it also feels very hollow. “Thank you for giving four years of your life, seeing friends and strangers die, and most likely coming home with Post Traumatic Stress Disorder–Have a beer.” 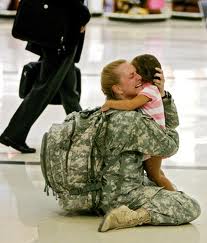 This is the way God feels about us.

For my day job, one of the things we do is go to Fort Campbell to do presentations for the 2nd and 3rd graders who attend the schools on base. There are six schools on base–Six whole schools full of kids with one or both of their parents sent away to fight. The 3rd graders see our Child Abuse Prevention program (there are high rates of abuse in families on military bases), and the 2nd graders see a program about dealing with deployment and reintegration in their families and getting their feelings out. I have yet to get through one of the 2nd grade shows without tearing up. These kids have to deal with a lot of shit that 7 year olds shouldn’t have to deal with–like ways to handle the daily fear of someone telling them that their mom or dad has died. Or having a father come home from war a different person than when he left….

Anyone who knows me probably knows that I believe that war and Jesus are about as incompatible as Republicans and social programs that help the poor. Today at work while looking up information for a fundraiser, I came across some troubling statistics dealing with suicide in the military. Men and women (but especially men) in the military are killing themselves at record numbers. Please consider this:

If these statistics don’t hurt something deep inside you, they should. And this doesn’t even go into numbers on veterans who come home with traumatic brain injuries, or end up homeless, or unemployed, or even the high number that go on to commit violent crimes. Something has got to be done.

So the government’s response to this epidemic of suicides in the armed forces is to try to provide counseling to the returning soldiers. They get off the plane, and they are asked to check a box that says “I’ve been thinking about killing myself.” These soldiers, trained to be in control, are given the option to say “I need help.” And checking that box will almost certainly delay the reunion with their families that they have been waiting for 16 months for…. It doesn’t seem like a very good plan. Please don’t get me wrong–I think we should be throwing every resource we have at them. Seriously. Spare no expense. But what if the problem isn’t lack of training or lack of support when they come home? What if the problem is war itself? What if we are just not meant to kill–even for something deemed a “Just War” (which, by the way, this war in which we have been engaged now for longer than World War II IS NOT)?

And with it, we'll bring a Walmart.

In the essay Sacrificing the Sacrifices of War, Stanley Hauerwas writes, “No sacrifice is more dramatic than the sacrifice asked of those sent to war, that is, the sacrifice of their unwillingness to kill. Even more cruelly, we expect those that have killed to return to ‘normality.'” When a young man enlists in the armed forces, they don’t want a person who seems eager to kill. They don’t want an army of murderers–Normal people possess an inherent unwillingness to kill. But then they take that young man and ask him to lay that part of himself (that part that is unwilling to kill) down–At the alter of the Nation-State. And then, we ask them to keep the horrors that they have seen to themselves. “Thank you for your service. Please don’t talk about what killing people does to your spirit. Here, let me buy you a round of drinks, shake your hand, and go on pretending like I’m not partially responsible for the demons you face.” It’s tragic.

This piece of art was made with weapons from Mozambique’s 17 year civil war. Plowshares, baby....

We have to do something. And the “We” in that sentence is the church. Hauerwas goes on to say, “The first task of the church is not to make the world more just, but to make the world the world. That claim is but a correlate of the assertion that the church does not have a social ethic. Rather the church is a social ethic.” America might be willing to view these brave men and women as the broken eggs needed to make an Omelet of Democracy (a great name for a band, by the way), but followers of Jesus Christ cannot. When Christians support war (with our words or our votes), we not only propagate the system that births statistics like the ones above, we disgrace and soil the name of Jesus. Jesus–Whose words and actions and life resonate with the world to be true, but whose followers’ willingness to kill (or, more rightly their willingness to have some poor, disadvantaged kid kill for them) convicts the world of nothing more than the Church’s hypocrisy.

One more quote from Hauerwas (I really like this guy): “But through the forgiveness made possible by the cross of Jesus we are no longer condemned to kill.  A people have been created who refuse to resort to the sword that they and those they love might survive.” Amen.

6 Responses to Sacrificing Our Children to the Nation-State