Leslie Jones, and What To Do When Racism Makes You Want to Give Up

Last night I sat in a packed out Church in Nashville with about 500 others–mostly white folks–and we talked about racism. The event was put on by an organization called SURJ, which stands for “Showing Up for Racial Justice” (You can learn more about SURJ HERE). “Showing up…” Woody Allen said that “Eighty percent of success is showing up,” and even though it was encouraging to see all those people come together for a cause we believe in,  I’ve got to admit that most of the time I feel like the problem–Racism, White Supremacy, and the Systems which support it–is just too big to make any sort of actual difference. It’s the air we breathe. And no matter how much people work, there’s always another person responding to “Black Lives Matter” with “All Lives Matter.” There’s a steady drumbeat of lifeless black bodies, without any consequence for the ones who took those lives. Freddie Gray’s death was ruled a homicide, and yet no one seemed to kill him… And when it was announced that the final officer was acquitted of any wrongdoing, the crowd at the Republican National Convention cheered in celebration. At the SURJ event, we talked in small groups about the barriers to doing something, and I said that a lot of the time, fighting racism feels like standing at the edge of the ocean with a Dixie Cup… Wondering how you’re going to get all that water out.

So this morning, I woke up and read this post on Facebook from a woman named Taylor Alex. Please, PLEASE read it… 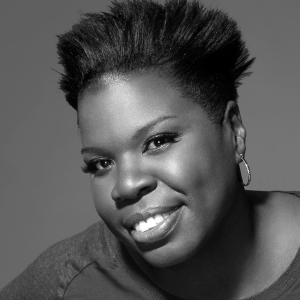 And here is some of her hilarious work…

She is from Memphis. She grew up as an Army brat. Because she was tall, she gravitated toward sports, and she ended up getting a basketball scholarship. She figured out she was really funny, and–at age 46–she landed a job as a writer on Saturday Night Live. At 47, she became the oldest person to become a cast member on SNL, and she ended up getting a part in this year’s reboot of Ghostbusters. A couple of days ago, a “conservative writer” for Breitbart named Milo Yiannopoulos led a targeted attack campaign of his racist Twitter followers (over 300,000 of them) against Leslie Jones. While enduring distilled hatred, Leslie tweeted this:

Ok I have been called Apes, sent pics of their asses,even got a pic with semen on my face. I'm tryin to figure out what human means. I'm out

She then posted some pics of the attacks. Here are a few of the results… Brace yourselves. 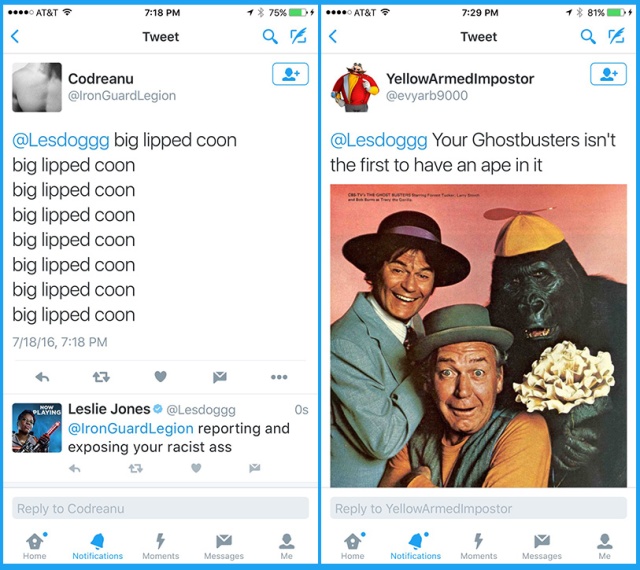 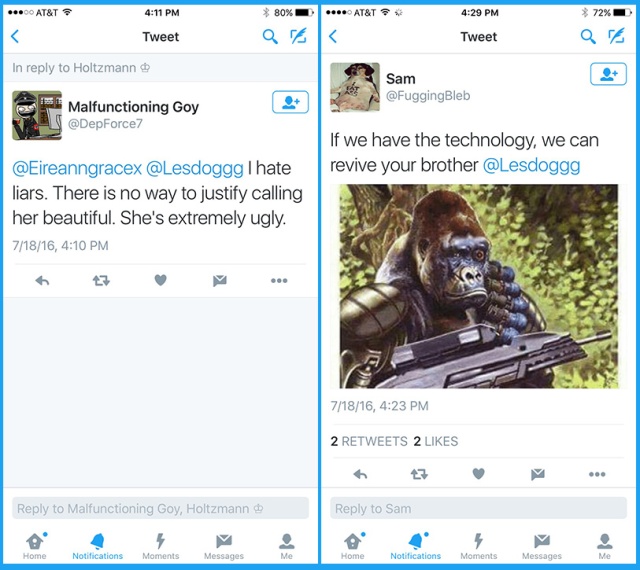 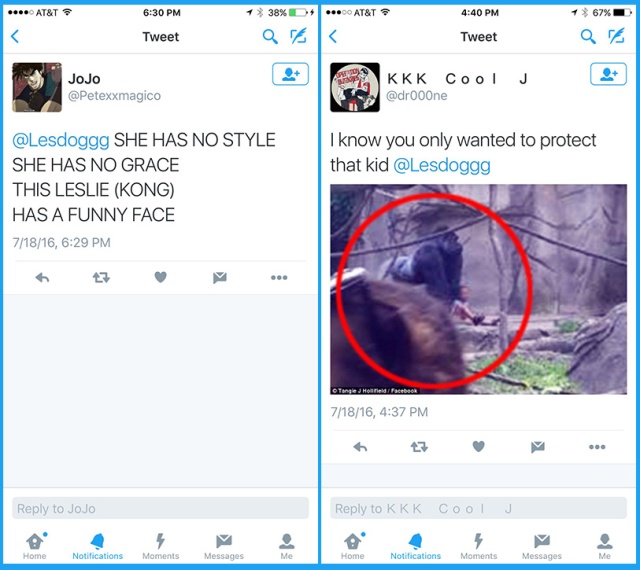 And at the end of a long day of enduring hatred and evil, she understandably left Twitter…

I leave Twitter tonight with tears and a very sad heart.All this cause I did a movie.You can hate the movie but the shit I got today…wrong

As a result of a pattern of targeted abuse, Twitter permanently suspended the account of this Milo Yiannopoulos person. A little bit later, Milo showed up at the Republican National Convention wearing a bulletproof vest, stood behind a “Trump/Pence” lectern, and let the world know that “I just got banned from Twitter,” saying that it was “for getting in a fight with a black Ghostbuster.” Here’s what that looked like… 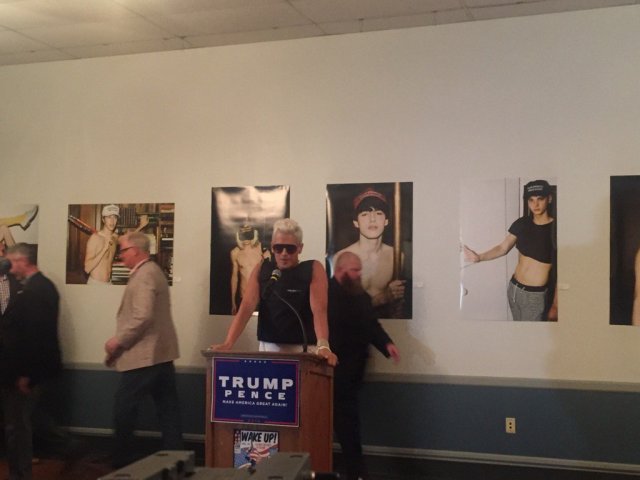 Here’s some of what he had to say on his Breitbart column:

“With the cowardly suspension of my account, Twitter has confirmed itself as a safe space for Muslim terrorists and Black Lives Matter extremists, but a no-go zone for conservatives… Like all acts of the totalitarian regressive left, this will blow up in their faces, netting me more adoring fans. We’re winning the culture war, and Twitter just shot themselves in the foot.”

“This is the end for Twitter. Anyone who cares about free speech has been sent a clear message: you’re not welcome on Twitter.”

So… Just to recap: 1) Joined with hundreds of others at an event working toward racial justice, 2) Left encouraged, but overwhelmed at the enormity of the problem… wondering what we can possibly DO about it, 3) Woke up today and listened to yet another black voice talking about the constant messages she receives telling her that her black life DOESN’T, in fact,  matter, 4) Grieved over acts of such cowardice and hatred, as seemingly endless waves of racist, faceless people publicly attack a woman because of the color of her skin,  5) Watched as an accepted voice in the republican party calls TWITTER “cowardly” for trying to protect its users from abuse… While he ignorantly claims his right to “free speech” is being infringed… By a private company… Who doesn’t think people should be targeted for bullying and harassment… All while he is cheered on by “conservatives.” These folks SAY they love the free market… Right up until the market determines that their hate speech is not welcome. Then they cry about “free speech.” Here’s a news flash: Free speech does not mean free from consequences. GAH!! And 6) I considered shutting it all down and moving to a shack in the woods.

Which leads me back to this very important question: WHAT CAN WE ACTUALLY DO ABOUT IT? Is it just part of us? Is the system too ingrained? Is the problem too gigantic? Is the ocean just too big? Sometimes, while watching an auditorium full of white people cheer the news that no one will be charged for the killing of yet another murdered black man, it feels like there is nothing we can do… Maybe there ISN’T anything we can do about about problem this big. Maybe that’s what Mother Teresa was talking about when she said,  “We can do no great things, only small things with great love.” So here’s what I did: I sent Leslie Jones a tweet. Here is what it said:

@Lesdoggg I see you. You are beautiful, you are infinitely valuable, you are talented, you are funny as shit, and you are LOVED. So sorry.

I don’t know if she’ll see it. I don’t know if it will matter. Sometimes–despite our best efforts, sometimes the ass holes of the world drown out the sound of our voices with their fear & pain (which presents itself in hatred). And I certainly don’t think that taking a moment to remind one person she is beautiful and valuable and loved is going to solve a problem the size of systemic racism… But here’s what it DID do: It reminded me, for a moment, that everything isn’t going to crap. It reminded me of beauty. And love. And it reminded me of the Cherokee man telling his grandson the story of The Two Wolves:

“A fight is going on inside me,” he said to the boy.

“It is a terrible fight and it is between two wolves. One is evil – he is anger, envy, sorrow, regret, greed, arrogance, self-pity, guilt, resentment, inferiority, lies, false pride, superiority, and ego.” He continued, “The other is good – he is joy, peace, love, hope, serenity, humility, kindness, benevolence, empathy, generosity, truth, compassion, and faith. The same fight is going on inside you – and inside every other person, too.”

The grandson thought about it for a minute and then asked his grandfather, “Which wolf will win?”

The old Cherokee simply replied, “The one you feed.”

Maybe we are not making a dent in a problem the size of systemic racism… Maybe we’re not even making a difference to the person we are trying to be kind to… Maybe we are just feeding the good wolf inside of our own hearts. If we focus only on the enormity of the problem, any action we take seems hopelessly insignificant… But sometimes we are planting seeds of love that won’t bear fruit until long after we are gone. So what do we do? Something. Do SOMETHING. And make it loving! I get it… Sometimes the world is a big mess. We don’t have to clean the whole thing, but if we see something on the ground, we should go ahead and pick it up. “We can do no great things, only small things with great love.” So grab your Dixie Cup, and head back to the ocean… We’ve got work to do. And while you’re at it, send Leslie Jones a tweet to remind her “what human means.”

If you value this blog and want to help support it, HERE’S A WAY to do that. Love you.

7 Responses to Leslie Jones, and What To Do When Racism Makes You Want to Give Up