Posted on December 5, 2011 by theboeskool 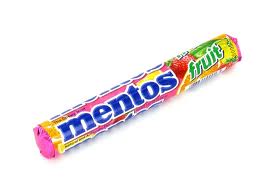 When this is the most exciting part of Church, something is horribly wrong.

The Church I grew up in was about as far away from “charismatic” as you could get. Nobody ever made a noise (other than the OCCASIONAL throat clearing), and you didn’t raise your hand even if you had a question. I can clearly remember that awkward feeling after a soloist would sing this amazing song, and then everyone collectively felt the urge to clap, but no one dared, lest we commit the “sin” of appreciating someone other than God. Church was pews and hymnals and silence, and then it was an endured sermon that was limited to 20 minutes (on the long end)–A boring mix that was broken up at regular intervals by the occasional Freshmaker pulled from my Mom’s purse. I would try to make those Mentos last me as long as I could by trying to delay the gratification that was biting down. As soon as you bit down, you knew those things were gone, but as long as you didn’t chew, that sweet flavor could last a few minutes. 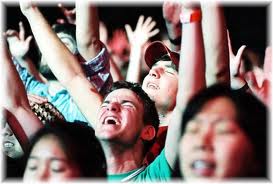 WE HAVEN'T HAD ANYTHING BUT COCONUTS TO EAT FOR THREE MONTHS!!!!

Then I moved to Nashville. The first Church I ended up at had people dancing. DANCING!! So I figured, “When in Rome….” I learned very soon that booty-dancing was not acceptable Church dancing (However, in my defense, she was DRESSED like she was ready to do a little booty dancing). I was fine with some of the outward expressions of worship, but some of it was just annoying: Like I always seemed to end up sitting in front of this dude who would whisper “Jesus” over and Over and OVER. I always wanted to turn around and tell him, “I’m pretty sure this is the actual definition of taking someone’s name in vain.” And there was something I didn’t buy about all the hand raising–It was like they were on an island trying to flag down a plane. “Seriously? You cannot all be this excited about this song. It’s not like God only answers the prayers of the ones who try the hardest to get his attention.”

Alright, you got me.

And I always hated it when the leadership was like, “Alright, now let’s all do THIS (whatever the “this” happened to be), but it was especially annoying for me (with my pews and hymnals past) when we were supposed to raise our hands. It felt like trying to force something I thought was supposed to be spontaneous. But at some point, the Pastor said something that resonated with me. He said, “Raise your hands–Just as a sign of surrender.” And I thought to myself, “I could use a little surrender right now.” My hands went up, and something came down–a barrier, a blessing, a peace that passes understanding–I’m not sure. It’s hard to explain, but it was real.

Before I go on, let me make this very clear: I DO NOT know how God works. I don’t know how prayer works, I don’t know how miracles work…. I don’t know how ANY of it works. Some people (cessationists) think that “signs and wonders” ended a long, long time ago. Cessationists believe that the gifts of the Holy Spirit (gifts like speaking in tongues, prophecy, and healing) ceased early on in Church history. For some reason, the (seemingly) less spectacular gifts (teaching, serving, giving, mercy, etc…) are still in effect. People over the years have argued a lot about this issue–Churches have been split, people have been killed…. Even Facebook friends have been de-friended! It’s surprising how many problems have started because people are “certain” they know how God works. 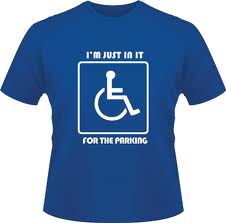 The down-side of getting healed is you lose the sweet parking.

I get the problem: If God really still heals people, then what do you do when you pray for some kid’s cancer to be healed and it doesn’t happen? Is it my fault? Is it the kid’s fault? Is it God’s will for that kid to die? I mean, if the kid gets healed, then, you know…. Terrific. It’s the times (and there are many of them) when God doesn’t do what you asked him to do where things get a little tricky. I get how it would be easier to just decide that miracles just don’t happen anymore.

The wheel on that chair never worked very well anyway....

It also gets tricky if you believe that God still speaks to us. Most cessationists believe that the Bible is the only way that God still speaks to us–That the Canon is closed. Because what happens when some joker starts telling everyone God said people need to give him their money for a piece of cloth that has been prayed over? Or that God told him to run for President? Or that God told him to go to war in Iraq? Of course, things also get a little tricky when people try to explain away parts of a Book that seems to okay slavery, forbids women in places of leadership, and even tells people to do crazy things like love their enemies, forgive people their debts, or even to sell your things and give the money to the poor. But really, What kind of a fool would do something like that?

Word to the wise: If you search for "Booty dancing" on Google images, make sure you're not on a work computer. In it's place, I present a picture of Chachi Arcola.

I don’t have all the answers, but it seems to me that anyone who believes that we can/should pray, and that God actually listens and responds to those prayers,  should also believe that miracles happen. These people who believe that God doesn’t still do miracles or speak to us–Do they believe that we can ask God for things? Because it all seems pretty miraculous to me, no matter how “small” the prayer that was answered. Whether its getting out of a speeding ticket or safety on a trip, whether its finding a wallet or a loved one finding Jesus, whether its a kid getting a part in a school play or a kid getting healed of Leukemia–It all requires the God of the universe acting in our world in some way (a.k.a. “A miracle”). Why pray if you believe that miracles have already ceased ? Or is there any other prayer than “Thy will be done?” Or will God be more likely to answer me if I whisper “Jesus” 172 times in a row while the guy in front of me is booty dancing in church?

A lot of questions….

Anyway, (for the third or fourth time, now) I don’t know how it all works–this God stuff. The logical part of me wants proof–Show me the before and after photos, let me see the medical records, let me touch the holes in your hands…. Well, I don’t have proof, but I do have a story. A testimony, if you will, coming from a sceptic of the miraculous. And here goes:

A few years ago I had a… let’s call it an “experience” with the supernatural. Stuff started happening that didn’t really fit comfortably into my worldview. These missionaries from another religion came to my house, and I invited them in thinking “I am going to tear these guys a new one” (theologically speaking). I was very confident in my own knowledge and my debating skills, I judged them as naive and misguided, and I went away from that discussion feeling kind of…. dirty. Now this part is hard to explain, but for the next week or so, I felt tormented. Whenever there was quiet time, I would hear voices–like a whole bunch of voices talking at the same time (I know how it sounds). The voices were accusatory and attacking. The closest thing that I can compare it to is the sound of voices flying around my head angrily asking me, “Did God REALLY tell you to not eat of this tree?” It was freaking me right. Out. Demonic, spiritual, psychotic, whatever…. It was scary. 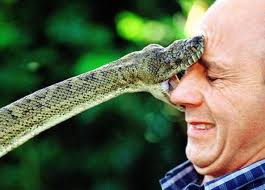 Phillip's first experiment with snake-handling did not go well....

So I talked about it with a guy I trust, and he goes, “Have you tried asking for forgiveness for judging those people who came to your house?” …. I hadn’t thought of that. So I tried it. Later that night, as I was driving to go meet my wife at the grocery store, I prayed. I talked to God. I was genuinely sorry for being such a jackass to those young men, and I asked for forgiveness. And something amazing happened: Peace. And quiet. Now, it should be noted that I am not a “speaking in tongues” sort of guy. Never have been. But as I drove along in that car, something welled up inside of me, and I started singing. I sang a song with no words (I didn’t have any), but if you had been there, there would have been no mistaking the fact that it was a song of thanks and praise, sung to the kind of God who listens to his kids when they ask for help.

This story, up until now, may or may not seem particularly miraculous. But when I got to the grocery store and told the wife about my drive, I felt like Bruce Leroy at the end of The Last Dragon, when he has that golden glow around him. We were in the produce section, and there was a fly buzzing around us as I told her. The fly landed on my arm, and as soon as it touched me, it died. It fell to the ground, twitched a couple times, and died. As I looked at that dead fly, a voice said to me, “They’re like flies to me” (clearly speaking about the sources of the voices that had been attacking me. It wasn’t audible, but I can hear it when I remember it). My hair on my body stood on its end for about a half hour.

Now, it might have just been that particular fly’s time to die–Flies die every day. And yeah, I know…. A fly dying is not the same as a kid being healed of cancer. But this whole thing showed me in a very real way that God will do what he will do–regardless of the limitations we put on him (like gender specific pronouns). When this happened, I wasn’t really comfortable with any of it–Not the idea of demonic influences, not the singing of songs with no words, not the dying fly, not the reassuring voice of God letting me know it’ll be alright…. None of it. But one thing I’ve learned about God is this: Just when we think we’ve got it all figured out, God seems to like to remind us that we don’t. So now I’m more careful about the limitations I try to put on the creator of the universe. Whatever your beliefs about the supernatural, I think this is probably wise.

6 Responses to Miracles, Mentos, and Booty Dancing in Church