You know what? I really don’t care who wins the presidential election. Six months from now, I will cast my vote for President Obama–Mostly because I feel like he will do a better job looking out for the poor and working towards a more just and fair society, but also because I feel that, of the two candidates, Obama has more integrity. I think just about everyone, if he or she is being honest (and lacking the advantage of having an actual relationship with either of the two men), would probably say that it at least FEELS that way. I am inspired when Barack Obama talks, and that is something of value to me. Not many people I know get inspired when Mitt Romney talks–certainly I don’t…. But the point is that my hope for real change in this world has little to do with who is elected President of the United States. I am cynical that anything of any significance will change should either man win. Also, I live in a state whose electoral votes Barack Obama has no chance whatsoever of winning, so my vote doesn’t really matter either way. So yeah…. I don’t really care. 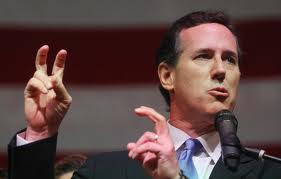 Do yourself a favor: If you search for a Santorum picture on Google Images, make sure you have the safe search settings ON.

Here’s what I DO care about: I don’t want the Church to look like a bunch of hypocrites. I don’t want the world to have yet another example of Christians saying one thing and doing another. There are a TON of people out there who truly believe that it is a Christian’s responsibility and even DUTY to vote other Christians into office. Most of the people who hold this view–I am not one of them–also happen to believe that it’s their responsibility to vote republican (though, admittedly, there are people on both sides of the aisle who believe it’s their Christian duty to only vote for Christian leaders). Most of these sorts of people didn’t want Mitt Romney to be the republican candidate for president. I live in a state whose republican primary was won (by a fairly large margin) by Rick Santorum for just that reason. But despite all of the disapproval by evangelical republicans during the primary run, we now find ourselves with the choice between a Mormon republican and a Christian democrat.

I believe my wife has used half-breed muslin in her crafting before.

Listen…. There are plenty of good reasons to vote republican, just like there are plenty of good reasons to vote democrat, just like there are plenty of good reason to vote for Ron Paul…. Whatever party he is. What is not okay is this: It is not okay to diminish the differences between Mormonism and Christianity–VERY SIGNIFICANT DIFFERENCES–just to try to win an election. If you believed before (say four years ago when you passed along all those BS email forwards claiming that Obama was a secret Muslim and was sworn in by laying his hand on the Quran) that Christians should only vote for other Christians, you have one of two options: 1) You can admit that you were way off before and what you really care about is NOT the professed religious beliefs of the candidate, but instead whether or nor that candidate shares your political perspective–That really, for you, God actually has nothing to do with it. Or 2) You can stick to your ideological guns and vote for Obama. 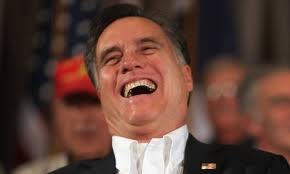 Romney is seen here laughing after being asked if he is “concerned about the very poor….”

A third option is NOT to make it seem like the differences between these two faiths are so insignificant that you can continue to act like God is the one compelling you to vote the way you are. That is just douchey and disingenuous and dishonest. And even worse, it makes Jesus and his Church look douchey and disingenuous and dishonest (I actually do care very much about right Christian theology. VERY much. Sweeping the differences under the rug to try to secure the Christian vote is not just douchey–It’s theologically dangerous). When we watch the other republican candidates (as well as church leaders, who, as Jon Stewart said, “Hate Obama more than [they] love Jesus”) tear apart Mitt Romney as being the absolute worst candidate for the job for a myriad of reasons, just to turn around later and endorse him when it becomes clear that he is going to become the nominee, we all cringe. Even the people at FoxNews cringe–because it is just gross and dishonest. The Church SHOULD be above this sort of thing. If we are walking around representing Jesus to a world that is desperate for something authentic–all while playing the same sort of dishonest games that we have come to expect from politicians–what happens is that it’s not just you that looks bad…. Jesus looks bad. And that is just not cool. Please stop. Seriously.

*As a postscript, the last time I wrote something about Mormons not being Christians, my blog post got LDS bombed by a bunch of pissed off Mormons. I am not trying to pick a fight with Mormons. I happen to be a person who believes that where Mormons line up with the God and the Jesus Christ that is presented in the Bible they are getting it right, and where they line up with the different God and Jesus presented by Joseph Smith and the Book of Mormon (and, to a greater extent, Free Masonry), they are getting it wrong. I’m sorry if that offends people, but surely even Mormons who desire to be called “Christians” can admit that there are real and substantial differences between our two faiths. Otherwise, why try to convert Christians, right? Anyway, it’s not my intent to offend. Peace.

7 Responses to Hating Obama More Than You Love Jesus