When Prayer Is Worthless–Some Thoughts On The Cold Weather

Posted on January 6, 2014 by theboeskool 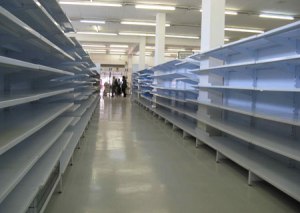 The bread aisle at any Kroger in the South if a meteorologist says the word “SNOW.”

If you’re like most of the people in this country right now, you’re probably dealing with the effects of some really cold weather. As I type this, there is a small layer of snow coming down outside, and tomorrow I expect to wake up and see hundreds of pictures of car thermometers and snow-covered yards on my Facebook feed chronicling the Snowpocalypse or Snowmageddon or Snowtastrophe…. I like to call it SnowWayI’mGoingOutsideTomorrow. Whatever you call it, whenever there is bad weather, people start praying. When I was a kid on nights like tonight, I prayed for snow days. Sometimes I even got them. But I’m not a kid anymore, and tonight it seems everyone’s praying for people on the roads, praying for people who are stranded at airports to catch a flight, praying for homeless people to stay warm, praying that there is still some bread left at Kroger…. Everybody’s praying. 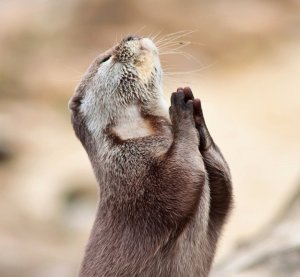 Please God, I ask you again: Break the wings of all the hawks.

When I was in high school, we had a bit of a controversy. I went to a small, Christian high school, and during basketball tournament time, some kids prayed that our high school’s team would win the upcoming game. We started debating whether or not that was something we should pray for, or if God even cared at all–one way or another–which team won a high school basketball game. If I remember correctly, I’m pretty sure we were even playing against a Catholic school’s team (making the theology behind things even trickier. I mean, I could understand if we were playing against one of those godless PUBLIC schools). I just didn’t feel right to me. Praying that we play our best? Sure. Praying that nobody would get hurt? I guess…. But appealing to God that he would somehow intervene in the natural world (boosts of energy, guiding shots, etc….) and miraculously do things to give our team victory just seemed to not really make sense to me. But I couldn’t quite put into words WHY it didn’t make sense.

They prayed he’d be president, and it happened. “It’s a miracle!”

There are some people who chalk up just about everything to MIRACLES. Now, people have a lot of different thoughts as to what constitutes a “miracle.” For some, every good thing that happens is a result of God’s direct intervention (and usually for these folks, every bad thing that happens is blamed on the devil). So…. Lost my wallet, and then found it later? “It’s a miracle!” Ran into Brittney at the mall today? “It’s a miracle!” Late for work and a light tuns green right as you drive up? “It’s a miracle!” For many, a miracle is an occurrence which could only be explained by some sort of divine intervention. But depending on how you see things, this could be anything from walking on water or praying for a person who gets up out of his wheelchair, all the way to getting a new job or finding a $20 bill on the floor. But for the purposes of this blog post, let’s just say that a miracle is whenever God interacts with the natural world.

I used to be able to just quietly endure people who chalked everything up to being a miracle. I would humor someone who talked about “miraculously” finding $20 on the ground by not asking them questions like, “What about the poor dude who lost that $20?” (He must not have been praying). But lately, I’m feeling more and more compelled to speak up when I hear someone give the credit for every coincidence to the creator of the universe. Or using phrases like “God’s Plan.” And it’s not because I take any joy in trying to mess with people’s simplistic view of things–I don’t. A big part of me wants to let people keep on living in happy ignorance. But the reason I’m feeling like I need to speak up is because of what this “Everything’s a miracle” worldview says about the nature of God.

If you’ve never read anything by Anne Lamott before, you should. This one’s good.

This view comes from a place of wanting to believe that God is in control of everything. It deals with the idea of sovereignty, and it’s an issue I can’t seem to escape. So when someone posts a status about asking people to pray for her safety while driving on the icy roads, I start thinking, “Is God the really in control of her car’s traction? And is God waiting on my prayers to give her a safe ride home? And does God’s decision to grant her safety somehow depend on how many people reply ‘I’m praying!'” And the subtext of this way of viewing the world is that “God is in control of every little thing.” And that way of viewing the world might work for people…. Right up until she doesn’t make it home. And then we start asking questions like, “Wait…. You could have kept her car on the road, but you decided NOT to?!? Was this part of your plan? Were waiting for more prayers?!!”

Dear God, Thank you for sending that storm away from US and toward that OTHER country.

When the cyclone came through the Philippines, a lot of people prayed that God would “be with” the people there. And subtly, silently, what we proclaim with prayers like this is that God was not with the people of the Philippines before the disaster. Or during. Or after (unless we ask?). And somehow, we expect that, with our prayers, this God that is in control of every little thing is going to miraculously direct help to the people who need it most…. While forgetting that this picture of a God who is in control of every little thing ALSO paints a picture of a God who was in control of the path of the storm that laid waste to whole cities–Cities that are still hurting and desperate for help, but are out of our news cycle…. at least until some sort of one year anniversary comes around, and we throw up a few more prayers.

I used to be so sure of how prayer worked, but I’m not so sure anymore. I’m not sure about what a miracle is, or with what frequency miracles take place…. I tend to think that they are a lot more rare than I used to believe. I think that if God ever was the sort of God who was in control of every little thing, he had to limit his own power in order to give us the freedom to choose to really love him and each other. I believe God grieves with us when she doesn’t make it home. And he cries with us when cities are swept into the sea by giant storms. I believe we were meant to BE the miracles for each other. My wife told me about this homeless outreach that was happening tonight in response to the freezing temperatures, and I didn’t respond. I just kind of let it not happen…. I’m not sure why. There will be other chances, I suppose. Maybe the real miracle is when we respond to the voice of God speaking to us, telling us to DO SOMETHING TO HELP. A prayer is never going to fill a hungry person’s belly like a sandwich will. If I was sleeping outside tonight, I’d rather have have one person getting me a bed with a blanket than a million people praying I stay warm. If we’re going to spend time praying, let us pray that our prayers miraculously turn into the action of loving those who need it most.

This entry was posted in 1) Jesus and tagged Anne Lamott, Miracles, Philippines, Praying for victory, Sovereignty, When Prayer is Worthless. Bookmark the permalink.