Five Things I Learned In Prison

I celebrated my birthday in prison this year. Our Church is part of a ministry called Timothy’s Gift.  They go into prisons to remind the inmates that they are human, that they are not forgotten, and most importantly that they are loved by God–Not because of anything that they have done, but simply because of of who they are. When they invited people to go on the trip, my wife asked me if I wanted to go. I told her I would love to, but I had to work, and we really didn’t have the money. It was a four-day trip that took place over my 40th (I know, right? Crazy) birthday, and she knew I didn’t want a big party, so she devised that she would surprise me with this trip as a gift for my birthday. She made a “Send Chris To Prison” GoFundMe page, and within a day, more than enough money had been raised. I can’t thank the people enough who gave to support me going on this trip. I felt so loved… Though I didn’t let it go to my head, because I think some of them might have thought that I was actually being incarcerated.

I’m the tall, good-looking bald guy in the back who doesn’t look a day over 39….

We drove from Nashville to Florida and visited four maximum security prisons–One women’s prison, and three men’s prisons. Like many other folks on the trip, I was nervous about what to expect. I was afraid it would feel like a trip to a zoo…. Like we would be observing some sad, dangerous animals from a distance. But it was nothing like that. What I really wanted was to GIVE these people something, but it was nothing like that either. I wanted to show them love, but instead I was shown love. I wanted to bring them hope, but I have never been as hopeful as I am right now. I wanted them to meet Jesus, but instead I met Jesus in a more profound way than I had ever before. Everyone always says that you can’t describe a trip like this–that you have to go and experience it for yourself…. But as much as that is true, I am sure the hell going to try. I can’t share everything that I took away from this Hope Tour, but here are a few of the things I learned: 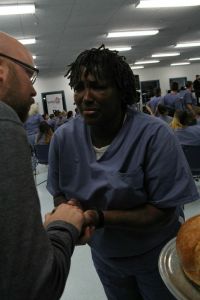 You are loved. You have great worth.

TOUCHING THE HANDS OF JESUS
We were instructed early on that the only contact we were allowed to make was with the inmate’s hand (for the prisoner’s safety, as well as our own). This was especially difficult for me, because I am a bit of a hugger. At the first prison we visited, I served Communion to about 100 women. For each inmate I placed my hand beneath her open hands waiting to receive, I looked her in the eyes, I called her by her name, I tore a piece of bread from a loaf held by another prisoner, I placed that bread in her hands and said, “God loves you because of who you are. He calls you ‘Beloved.’ This is the body of Christ, broken for you.” Some people believe that in the Eucharist, the bread turns into the actual body of Christ…. I’m not sure about that. In the Bible Jesus says the words, “I was in prison, and you visited ME,” and I can tell you this: I am sure that as I touched those hands, I touched the very Body of Christ. It was one of the single greatest honors of my life.

TAKING OFF MY SHOES
One of the first things I noticed inside the prison walls was the faces of the men and women there. In my head when I imagined people in prison, I saw prisoners as outfits. I saw them as outlines of people. But they are whole people, even as they are broken. They have faces–Some of them wrinkled and weathered, some of them so shockingly young. We walked into a dorm of inmates who had made a commitment to be missionaries in the confines of the prison, past the indignity of a windowed bathroom, to inmates cheering our arrival. It was surreal. They sang us a worship song, and before it was over we were singing with them–As one body, tears rolling down our faces. And I suddenly had an overwhelming urge to take my shoes off, because it was clear to all of us that we were standing on holy ground. But as Elizabeth Barrett Browning wrote,

“Earth’s crammed with heaven,
And every common bush afire with God,
But only he who sees takes off his shoes.”

REMEMBERING HOW TO PRAY
After the women sang and prayed for us, we had the opportunity sit down in small groups and talk with five different inmates for about 30 minutes each. We just sat there and listened to their stories. We encouraged them and told them they are loved. Two of the women we spoke with had never had a visitor in all the years they had been locked up. One woman we spoke with told us about so many hurts…. And she said she had a goal to find a good Church when she got out (in about five years), a “real” Church–One who would pray for her. I asked her what she would want them to pray for her about, and she said, “Strength and guidance.” Now, I don’t understand how prayer works. It has been YEARS since I have said something as “churchy” as this, but I heard myself say to her, “Do you mind if I pray for you?” I have no idea what I said, but I felt like it was powerful. And sitting there in that prison library, holding the hand of a criminal, talking together with our creator…. It felt as natural as breathing or laughing or falling asleep.

I climbed up two rickety old ladders to get to a dusty old balcony to get this shot. There were more than 400 prisoners who heard a message of hope…. As well as some really kick ass music.

LETTING GO OF MY BURDEN
As I was walking out of one of the men’s prisons, I was carrying a 40-pack of bottled water on my shoulder. It was a hot day, and it was getting heavy…. So I decided to start asking people if they were thirsty. And as my burden got lighter and lighter, what I can only describe as the voice of God whispered to me, “Why don’t you think about that for a moment.” So many of us are burdened with hurts. And fear. And shame. But as we meet others in their place of need… And we give of ourselves… And as we stand with the broken and the vulnerable, we truly discover what it means to love and be alive and be free. In letting go of the things we have, we find what we’ve been needing. In standing with the broken and the and the vulnerable, we are actually standing with Jesus….

“I DO NOT CONDEMN YOU EITHER”
A big part of the message we were bringing was that these people are not defined by their worst mistakes. And that is true for you as well…. Whoever the “you” is who happens to be reading this right now. Not only does God know you, but God knows you AND God loves you. When the angry crowd was ready to stone the woman caught in adultery, Jesus silenced them with the words, “Let he who is without sin cast the first stone.” After everyone left, the story goes on, “Jesus said to her, “Woman, where are they? Did no one condemn you?” She said, “No one, Lord.” And Jesus said, “I do not condemn you, either. Go. From now on sin no more.” Many times when people use this passage as a picture of God’s giant Mercy and Grace, people who believe that point of the Bible is eliminating sin will focus on the “sin no more” part. But when you read it again, you see it says, “From now on….” First comes the knowledge that he does not condemn. That he is on our side. That we are loved…. THEN–“From NOW on”–comes the “sin no more” part.

It’s just like in the story of the Prodigal Son–It was a story of TWO sons. One who made some really bad decisions, another who stayed at home and did all the right stuff…. But neither of the sons knew their identity. And all of us–whether we are on the inside of a correctional institution, or whether we are outside working like a slave–ALL of us need to know our identity. And that identity is this: We are the beloved children of God. He knows us AND he loves us. Nothing my children could do could ever make them not mine and not loved. And God does a way better job of loving his kids than I do….

If I have done even a halfway decent job of describing this experience, please know that it is a poor substitute for the ACTUAL experience. If you ever have the chance to go on one of the Timothy’s Gift Hope Tours, I can’t recommend it highly enough. Please watch this video for a better understanding of what they are trying to do:

This trip has changed my life and my heart. If you are inspired by what Timothy’s Gift is trying to do, you can support them RIGHT HERE. It was in every way amazing, and just in case you are worried, there was never even one moment where I was afraid for my safety. I joked on the bus ride about trying to check things off of the list in Matthew 25 (“When I was hungry, you fed me. When I was thirsty you gave me something to drink…” and so on) in order to try to get into Heaven, and a new friend (this amazing woman here) said, “Maybe it’s not a list of stuff to do. Maybe it’s where we go to find him.” When we feed the hungry and we get people clean water, and when we invite in the stranger and we get people clothes who need them, and when we take care of the sick and we visit the prisoner…. Maybe we are literally encountering Jesus.

This entry was posted in 1) Jesus and tagged Five Things I Learned In Prison, Hope Tour, Prison Ministry, Prodigal Son, Spending My Birthday In Prison, Timothy's Gift. Bookmark the permalink.

13 Responses to Five Things I Learned In Prison