Ray Rice, Adrian Peterson, and The Spirit of God 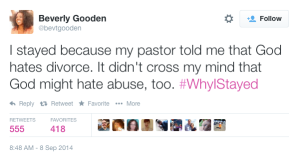 It should be noted that the first response to this tweet was “Your pastor is a dickwad.”

I come from “a broken home.” A broken home…. What does that even mean? Most people define a broken home as one where the parents got divorced, but my home was broken by domestic abuse long before it was ever “broken” by divorce. My dad would sometimes get violent when he drank, and my dad drank a lot. My mom agonized over the decision to leave her abusive husband–mostly because the Church told her that doing so would put her in danger of hell. But threatening someone who is stuck in an abusive relationship with “hell” is kind of like telling someone who’s neck-deep in a sewer that they better not try to get out, or else you’ll punish them making them sit in a port-o-potty. When they die. It’s so stupid…. All the shame we put around divorce is one of the engines that powers domestic abuse. All to try to prevent “a broken home.” Oddly enough, divorce is actually the thing that fixed my home.

Many people today look at abuse as a sort of unforgivable sin (Though it used to be way more socially acceptable). When people saw this video of Ray Rice punching his fiancee in the face, most people lost their minds. In the wake of the outrage over the released video, his team immediately released him, and the NFL suspended him indefinitely (instead of the 2-game suspension he had been given when he confessed to hitting Janay Palmer hard enough to knock her out…. the same exact crime, only without the public outcry). Something definitely changed when people SAW what domestic violence looked like. Instead of looking for scenarios that would justify a man pulling his unconscious fiancee out of an elevator (maybe he “just” hit her with an open hand and she fell and hit her head, maybe he just pushed her really hard into the wall, etc…), when people actually SAW it, they were forced into a reaction.

This photo is heartbreaking….

I can tell you from experience: Hearing about domestic violence is completely different than SEEING domestic violence. When my dad was still living at our house I was very young, so I don’t have a whole lot of memories of what the violence at our house looked like. I remember bits and pieces…. they’re hazy. But after my parents got a divorce, my dad started dating a woman who had kids near my age–middle schoolish. The woman was very nice…. I really liked her. One night she and my dad were arguing, and the yelling got louder. I watched from the stairwell–afraid to make a noise–as my dad swung this woman around the room by her hair, and slammed her into the wall. There was more…. I can’t remember everything from that night, and there’s some stuff I don’t really want to remember, but when the police came, she was bruised and bloodied. It was terrible.

We all learn lessons in different ways. In the absence of an example of how to act, an example of how NOT to act may suffice…. The lesson I learned that night was simple: What I had just witnessed was not okay. I remember saying to myself, “That will never be me.” I’ve learned more than a few lessons in life by learning what not to do.

When I was in high school, I started dating a girl. When things were first starting out, she was way more into me than I was into her. One night–early in our relationship–I cheated on her. I told myself that “nothing was official,” I blamed the girl I hooked up with for seducing me…. It barely happened, and it only happened once,  but really–I just cheated. After dating her for a while, I really started falling in love with her. The guilt of that one stupid night just ate away at me, and I decided I needed to tell her (I thought I was “doing the right thing,” but if I’m being honest, it might have had more to do with me relieving my guilty conscience at the expense of her feelings). Up until that point in my life, telling her about it was probably the hardest thing I had had to do. Anyway, she broke up with me–rightly. I learned some lessons from that experience as well…. 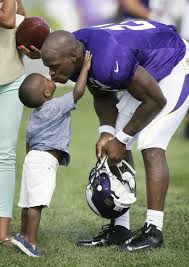 There is no excuse for what Adrian Peterson did to his son, but he’s not worthless. He needs help.

People rush to judgment with things like this. We see the news about Tiger Woods cheating on his wife, and people throw out phrases like “Once a cheater, always a cheater.” We see video of Ray Rice striking Janay Palmer, and people decide that it can’t be the first time, and they are certain that if she decides to stay, it won’t be the last. “Once an abuser, always an abuser!” And they shame her for staying. We see pictures of Adrian Peterson’s son with cuts and bruises on his butt and thighs from a “whoopin” with a switch, and we decide that child needs to be taken away from him forever. And please don’t take this as a defense of what these men have done–I don’t think there is any defense–but we are so quick to give up on people. And I think that’s so tragic. I suppose it’s much easier to decide that someone is a worthless piece of shit than it is to be hopeful that he or she can change.

Maybe he learned something.

I completely understand Elin Nordegren deciding to leave Tiger Woods. I’d completely understand if Janay Palmer decided to leave Ray Rice. I understand the outrage over Adrian Peterson hitting a 4 year old kid that hard. But this “giving up on people” denies their humanity by denying the possibility that they can learn from their mistakes. When people do stupid or awful things, there are consequences…. But one of those consequences might be coming away from a terrible mistake as a better version of yourself. I can tell you with certainty that I would never be unfaithful to my wife, and part of the certainty I have in saying that came from the pain and shame of cheating way back in high school. A fleeting excitement is never worth hurting someone you care about. But that’s a lesson I learned by making a mistake…. By learning what NOT to do. 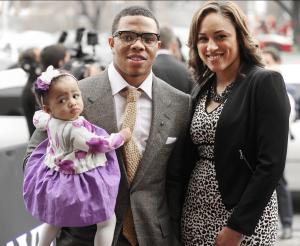 I have hope for this family.

And I’m not talking about being blindly, ignorantly innocent to how messed up people can be. I’m talking about being HOPEFUL. I’m talking about seeing brokenness for what it is, instead of immediately abandoning a person as “pure evil.” I’m talking about an expectation that people can learn, and grow, and evolve. I’m talking about a desire to help that outweighs a desire to punish. William Gay, a player for the Pittsburg Steelers whose own mother was killed by domestic violence, said this about Ray Rice: “That was wrong of him, but at the end of the day, we don’t need to run away from Ray Rice. He needs help.” But calling out for help for someone who does something horrible requires hope that that person can change. And if we don’t have that hope for one person, how could we ever have that hope for the world? And without that hope, we end up with a philosophy that says, “Convert or be killed.” A philosophy that is, ironically, identical to that of our enemies.

Please read this quote by Howard Zinn at least twice:

“To be hopeful in bad times is not just foolishly romantic. It is based on the fact that human history is a history not only of cruelty, but also of compassion, sacrifice, courage, kindness. What we choose to emphasize in this complex history will determine our lives. If we see only the worst, it destroys our capacity to do something. If we remember those times and places – and there are so many – where people have behaved magnificently, this gives us the energy to act, and at least the possibility of sending this spinning top of a world in a different direction. And if we do act, in however small a way, we don’t have to wait for some grand utopian future. The future is an infinite succession of presents, and to live now as we think human beings should live, in defiance of all that is bad around us, is itself a marvelous victory.”

The Spirit of God….

It’s a lot easier to see everyone as complete crap. Man…. A lot of times it’s even easier to see YOURSELF as complete crap. I mean, if we’re all just a bunch of garbage that deserve to burn in hell, all this brokenness around us would make sense. And like Howard Zinn said, “If we see only the worst, it destroys our capacity to do something.” But if there’s something in us that is worth something—Something Good—something worth remembering in the midst of all this garbage, then there’s reason to have hope. And what if that thing inside us is the Spirit of God? And not just inside us, but also inside our enemies–inside of the abuser, inside of the prisoner, inside of my father, inside of me…. Things start looking differently. Things aren’t as simple. Suddenly, the person who is hungry is not just dismissed as lazy. It changes the way you see prisons. It changes the way you see everything. Instead of a bunch of garbage, you see the world as something waiting to be restored. 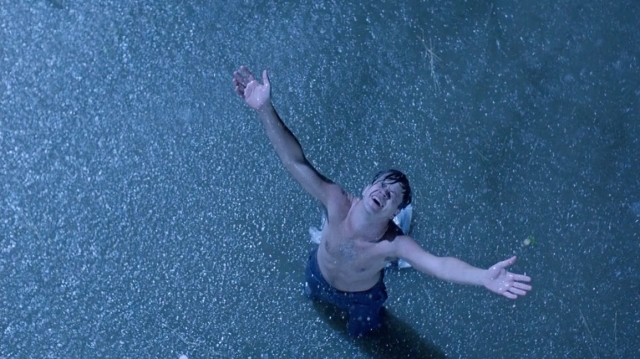 “Hope is a good thing…. Maybe the best thing. And no good thing ever dies.” ~ Andy Dufresne

When we see a man hit a woman hard enough to knock her out…. When we see hurt and abuse and brokenness, we need to do something about it. We need to work to make it stop. But while we work, we need to remember that even the broken are made in the Image of God. Nonviolence is rooted in the audacious recognition of our enemy’s humanity. But a spirit that looks at another human being and says “Worthless piece of shit” is the same spirit that cuts off the heads of reporters, and it’s the same spirit that corrals people into gas chambers. That sentiment is the beating heart of all that’s wrong with the world, and it has no place in our own hearts. There are two main responses when we see people who are broken: We either want to punish brokenness, or we want to fix it. We want to heal it. We want to restore it. We want to save it. And these very different responses apply as much to the world as they apply to an individual. I believe that when God looks at this broken world, he doesn’t want to punish it–God sees a world that he called “good.” He wants to fix it. And heal it. And restore it. And save it.

At least I HOPE that’s how God is. If I’m wrong, and God is all about punishing the world, I’ve got some bad news for you: We’re screwed. And since we can’t know for sure, we might as well live like God loves “us” every bit as much as God loves “them.”

This entry was posted in 1) Jesus, 5) Not Quite Sure and tagged #WhyIStayed, Adrian Peterson, Andy Dufresne, Domestic Abuse, Domestic Violence, Hope, Howard Zinn, Janay Palmer, Learning What Not To Do, Nonviolence, Ray Rice, Shawshank Redemption, The Spirit of God. Bookmark the permalink.

10 Responses to Ray Rice, Adrian Peterson, and The Spirit of God