Something tells me I can’t know everything I need to know about this person because of this one blinding display of ignorance….

About a month ago, some co-workers and I went to the Islamic Center of Nashville. We met with a man who was part of the leadership at the Mosque, and he spoke to us about some of the issues Muslim kids in public schools have to face. He was very kind, and sort of endearingly nerdy. During his powerpoint he showed some pictures of some of the discrimination that Muslims have to deal with in their lives and on social media…. Pictures of burned down Mosques (local Mosques), hate-filled graffiti, and inflammatory Islamophobic pictures that people shared on Facebook and Twitter (like the one that I wrote about HERE detailing “How To Wink At A Muslim”). As he showed all these hurtful images, he didn’t seem upset or angry. He seemed more resigned to those sorts of images as a fact of life. It was more like, “So yeah…. that’s just a part of what we have to deal with.” He was just calmly stating a sad reality.

The only time I saw him even get a TINY bit worked up was when he spoke about the term “Islamic Terrorist” (Thinking back on it now, he probably doesn’t feel much freedom to show a lot of passion about the daily prejudices that Muslims face because he doesn’t want to come off as “angry,” even when there is plenty to be rightfully angry about…. But I’m speculating). Anyway, he showed just a bit of emotion as he talked about “these maniacs” (his words) who murder and terrorize being described as “Islamic Terrorists.” In the face of all those examples of ignorance and prejudice, the only thing that brought his frustration to the surface was the fact that every time another one of these crazy people killed somebody, it was equated to Islam. And again and again, a religion of peace was being associated with the worst sorts of violence.

This is the most powerful image I’ve seen about this tragedy.

And as sat there in that Mosque and I listened to him talk, I knew how he felt: That frustration of watching a misguided group effectively hijack a term you care deeply about. I think about it every time I hesitate before identifying myself as a Christian. A lot of what I do here is attempting to defend Christianity from the people out there who are trying to make it seem like following Jesus is all about fighting against gay marriage, tax cuts for the wealthy, and arming yourself to the teeth. So as I watch the horrors unfold as the news covers the tragic murders at France’s Charlie Hebdo, I think again of sitting there with my shoes off while listening to this kind man trying to contain his frustration with the term “Islamic Terrorist” when the term “Terrorist” would suffice.

That makes it easier to understand….

When crazy people freak out and start killing people and credit their Christianity, you know what we DON’T call them? Christian Terrorists. At the end of last year, a crazy person named Larry McQuilliams fired more than 100 rounds in downtown Austin on his way to try to burn down the Mexican Consulate. He credited Christianity as the inspiration for his extremism, and in his van was a book called “Vigilantes of Christendom” and a note calling himself a “priest in the fight against anti-God people.” The Norwegian nut-job who killed 77 people (mostly kids) in 2011 described himself as a Christian. Timothy McVeigh was hugely influenced by the “Christian Identity” movement in forming the sort of belief system that would blow up a building. Just about every white supremacist credits Christianity for their hatred, and acts of violence and terrorism against gays in this country is overwhelmingly done by people identifying themselves as “Christians.”

No one in the Christian community feels the need to distinguish themselves from these lunatics, because they are so clearly opposite to everything that Jesus was about. When I saw a Muslim friend of mine for the first time after the massacre at Charlie Hebdo, even though he is very aware of my understanding of this issue, he still felt the need to say, “This is not us.” Maybe we shouldn’t expect every member of the Muslim community to distance themselves any time some deranged person credits Allah for their murderous intent (Though, if you want to hear some of the reactions from Muslim leaders to the Charlie Hebdo tragedy, HERE IS AN AMAZING LIST.)

The face of a hero.

Maybe instead of making the face of Islam those murderous masked men, we can focus on a different face…. The face of Ahmed Merabet. Ahmed was a policeman assigned to protect a woman who worked at Charlie Hebdo who had received death threats because of insulting comics the magazine put out about Islam and Mohammed. He was a French man, living in the birthplace of liberty, and he was a Muslim. He died, gunned down in the street by deranged killers–killers whose professed “Islam” was as foreign to him as the Westboro Baptist’s religion is foreign to me. And he died defending the rights of a magazine to insult and ridicule his faith. This is the face of a hero, it is the face of freedom, and it is the face of Islam. 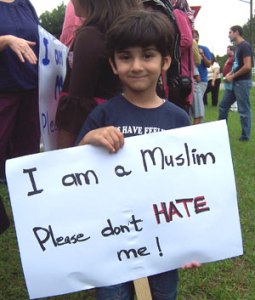 So what can we do? We can remind people that allowing these lunatics to inform your understanding of Islam is itself lunacy. This sort of stuff is the very definition of prejudice, and it is the beating heart of the sort of discrimination that leads to even more tragedies like what happened at Charlie Hebdo. We can tell the story of Ahmed Merabet. We can remind people that Christianity has been used every bit as effectively in the past as a justification for killing people who are different. We can post rational and loving comments on threads that are filled with hatred and fear. We can remind people (or inform them if they don’t already know) that most of the people fighting against this sort of murderous religious extremism are, in fact, MUSLIMS.

You know what? That’s a good name for it: “MURDEROUS RELIGIOUS EXTREMISM.”  It is NOT Islamic Terrorism…. It is not a matter of Christianity versus Islam. It is a difference of ideology. I am an ally in the struggle (the word “jihad” actually means “struggle”) against a radical fundamentalism that seems to be spreading…. Against a black & white, “us & them” way of thinking…. Against a dangerous certainty. I feel much more closely connected to a Muslim looking for peace in the midst of all of this violence than I do to a “Christian” who is using this tragedy as a rationale for even more killing. If you are using your religion as a justification for killing people, you are part of the problem…. Regardless of your religion. Beloved, let us love one another.

***Three things: 1) Don’t use the comments section to make your case for all the reasons Islam is not a religion of peace…. Christianity’s track record with killing people who disagree with them is every bit as disturbing. 2) I am trying to write a book. I’m sorry to make you wait longer between posts. You’ll get over it…. And 3) Don’t let the pushback from all the crazies out there make you afraid to share this post. Be brave and loving and rational. Also, thanks for reading.***