MLK and the “American Sniper” — A Tale of Two Heroes

“A nation that continues year after year to spend more money on military defense than on programs of social uplift is approaching spiritual death.” ~ Martin Luther King, Jr.

There is a film about an American hero in the theaters this MLK weekend, but that film is not called American Sniper.  Premiering this weekend, the movie American Sniper is based off of the autobiography of Navy SEAL Chris Kyle. You’ve probably seen ads for it–It’s the one that was directed by Clint Eastwood and has Bradley Cooper as Kyle…. the one where the guy is talking to his wife on the phone about finding out the gender of their baby when the the convoy is suddenly hit by at IED (This movie will almost certainly do very well at the box office, as I’m betting that there are quite a few people out there right now who wouldn’t mind going to the theater and watching some Muslims get shot….). Chris Kyle is known as the most lethal sniper in U.S. military history, having 160 confirmed kills (kills that someone else witnessed) out of a reported 255 kills. 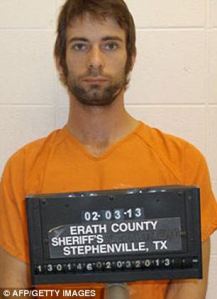 Eddie Ray Routh, the man with PTSD who killed Chris Kyle and took his truck. Afterward, he told his sister, “I traded my soul for a new truck.”

Now before I go any further, I have to admit that as a Christian who believes that Jesus has called his followers to non-violence, the glorification of this sort of killing is something that is wholly foreign to me. And really, if I’m being honest, pretty disgusting. I just don’t get it. I’ve tried. I’ve watched some videos of interviews of Chris Kyle talking about his kills…. and I guess I understand a mentality that says, “It’s either them or us” (I keep writing “kills,” but really it’s “PEOPLE who were killed.” I suppose “Kills” is an easier way to say it than “hearts stopped” or “people whose lives were taken by a soldier in an invading army from a country that started a war with your country under false pretenses”). I’m not writing this to say that Chris Kyle is a bad person–After his tours, he worked to help military families and tried to help people who were dealing with Post Traumatic Stress Disorder. He and a friend were killed in 2013 on a shooting range by a friend who they brought to the range in a misguided attempt to help him with his PTSD. There are many people in this country who consider him a hero…. I am just not one of them.

When we ask our soldiers to sacrifice that part of themselves that knows it is wrong to kill, it has devastating effects.

Chris Kyle’s story is not a heroic story….  It is a tragic story. I take no joy in questioning the legacy of an American Soldier who is no longer alive, but I think it’s an important conversation to have. Do we really want to be the sort of nation whose heroes are the ones who have killed the most people? Can we aspire to more than that? A lot of people think it’s crazy that groups like ISIS claim to kill in the name of God. But in order to glorify a man who killed somewhere between 160 and 255 people, you have to believe that that man was doing God’s work. You may not realize you are looking at it that way, but if you believe in God and you support this sort of thing, you probably believe that God is behind it. Sure, the country is the one giving the orders (and giving the deaths legitimacy), but somewhere in your theology, you probably believe that the country has the authority to take those lives because God has given that authority to them….

His friends also call him Legend.

Please follow me here: Imagine someone from the Crips goes out and kills 20 Bloods…. that person is probably going to be a Legend among the Crips. But to the rest of us, it just looks like gang crime, right? And if an assassin from AT&T goes out and kills 160 people from Verizon who were trying to take over their turf, we all would look on in horror…. That is, of course, unless you consider your primary loyalty or allegiance is to AT&T. In that case, you might think those killings are completely warranted. Then again, if your allegiance is to Verizon, those killings look like murders and terrorism. How you view the taking of another human life depends on which kingdom you have given your allegiance to. For example, while Chris Kyle was in Iraq, some of his fellow soldiers referred to him as “Legend,” but the Iraqi people called him “Shaitan Ar-Ramadi” (The Devil of Ramadi). And when John Allen Muhammad and Lee Boyd Malvo did their sniping in and around the D.C. area, we called them murderous terrorists, but some people in other parts of the world might call them something completely different.

Is this how we settle things?

So if you look at the killing of Iraqi people as legitimate, where does that legitimacy come from? Many would start quoting Romans 13 and say that God has given the government the authority to swing their swords…. The trouble is this: There are a whole lot of governments out there. If it’s one government versus another government, how do we figure out who has the authority? Do we fight it out–winner takes all–and then figure that the victor had God’s blessing? Do we really believe that “might makes right,” and settle our governmental differences with some sort of deadly arm wrestling match between city states? Or, more rightly, a chess match where the pawns are the poor souls (usually figuratively AND literally poor) who the king has managed to convince that to die and kill for him is ordained by God himself? It’s just strange to me.

“And to the reception for which it stands. One service under U-Verse, with internet and WIFI for all….”

So from the vantage point of citizens of the United States of America (with our hand over our hearts, pledging our allegiance), an assassin from AT&T killing 160 people from Verizon just seems like some bizarre and tragic turf war…. But here’s the thing: A Christian’s allegiance belongs to a different Kingdom. And if your allegiance is to the Kingdom of God, then that’s what all these wars start seeming like–some bizarre and tragic turf war where the people involved think their killings have legitimacy. But really it’s just like some dude from AT&T killing someone because his CEO told him it was okay. And the crazy thing is that in reality, AT&T is bigger and richer and more powerful than some sovereign countries in the world. 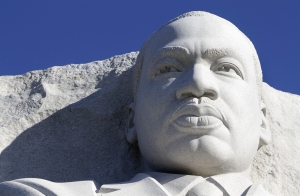 “Out of the mountain of despair, a stone of hope.”

This morning, the Academy Award nominees for best picture were announced. Among the list of nominees were two films about American Heroes–American Sniper and Selma. One of those heroes was taught by our military to use a rifle to take the lives of men he didn’t know. The other hero had his life taken from him by the rifle of a man he didn’t know–a man who was taught to kill by that same military. One man looked down the scope of a gun and killed somewhere between 160 and 255 people who he had identified as enemies. The other looked out at a crowd of people and told them, “Love is the only force capable of transforming an enemy into a friend.” One man died at a firing range in Texas, bringing a friend there whose mind was shattered by the horrors of war in the hopes that firing some more guns would help his PTSD. The other died on a balcony in Memphis, standing with striking sanitation workers in the hopes that he could help bring some attention to a group of garbage men looking for a living wage.

If there is a hope for this world, it is not in putting a bullet through our enemies. As Dr. King said in his Nobel Peace Prize acceptance speech, “Nonviolence is the answer to the crucial political and moral questions of our time: the need for man to overcome oppression and violence without resorting to oppression and violence. Man must evolve for all human conflict a method which rejects revenge, aggression and retaliation. The foundation of such a method is love.” The heroes are not the ones dispensing bullets; they are the ones dispensing love. I’ll leave you with one more heroic quote:

“The gospel at its best deals with the whole man, not only his soul but his body, not only his spiritual well-being, but his material well being. Any religion that professes to be concerned about the souls of men and is not concerned about the slums that damn them, the economic conditions that strangle them and the social conditions that cripple them is a spiritually moribund religion awaiting burial.” ~ MLK, from “Pilgrimage to Non-Violence”