I clearly remember eating Wheaties and actually FEELING myself getting stronger. Though it might have been all the sugar I put on them to make them nearly palatable….

I’ve never really thought of myself as handsome–Certainly never as handsome as Bruce Jenner, with his muscles, and his Wheaties box covers, and his great head of hair…. You know what, I suppose there was a window in time where I was like, “Okay…. I’m alright.” But that window was brief. Very brief. I spent almost all of my youth feeling way too skinny, and just when I started to be okay with my body, God (that old prankster) took away my hair. I used to joke that God made me go bald because it wouldn’t be fair to everyone else if I was smart, funny, talented, AND good-looking. It was a decent deflection (though it was before I realized God had nothing to do with those sorts of things). Then I blinked…. and now I’m 40, I have three kids, and the other day I caught myself looking at my belly sideways in the mirror.

But like all of us who carry around insecurities about what we look like, I grew up believing that old saying that proclaimed “It’s who you are on the INSIDE that counts.” Ahh, yes…. “You can’t judge a book by its cover”–The great consolation for all of us walking around with crappy covers. I recently shaved my beard for the first time in a while. It’s funny to hear people’s reactions. People look at my shorn face with a kind of tentative concentration, and then they’ll say something like “I kind of like it” or “It’s alright!” all with their voices filled with something between surprise and uncertainty. And I’m always thinking to myself, “Well, I suppose that works out great, because it’s MY FACE, YOU JACKASS!!!” Most people don’t realize that they just gave the flesh that covers my skull the equivalent of a verbal “So-so.”

I still like to believe that Molly Ringwald came to her senses after the credits and went with the Duckman.

But for me, being unsure about my outside encouraged me to focus on the inside…. since that was the part that mattered, right? I would be the diamond in the rough. I would be the one the girls didn’t know they wanted until they actually got to know me. I would be the guys from Weird Science. I would be the Ducky. I would be the Lloyd Dobler. And I suppose being insecure has its advantages–if you can’t rely on your looks, you’ve got to find something else to rely on. So I learned to be funny. I learned to be deep. I learned to be clever…. And if I’m being honest, it came pretty naturally to me. I was able to observe which awkward things I did made people feel uncomfortable, and I took mental notes to not do those things anymore. And before long, I became confident about my insides. Which was awesome, because if what everyone was saying was true, THAT was the part that really mattered. 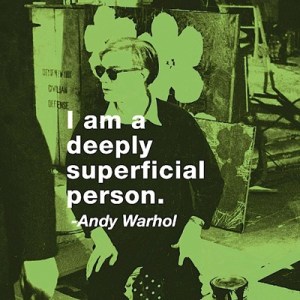 Another good quote from Andy Warhol–“I think everybody should like everybody.”

But after a while, a funny thing happened: My “Part that really mattered” started feeling like it was better than most other people’s “Part that really mattered.” My insides started looking down on other people’s insides. That way, if some girl I was attracted to (who, by the way, was probably not receiving my affection because of her “part that really mattered”) liked a guy who was better-looking than me, and I’d explain it away with words like “Superficial.” Which really, if we’re being honest, was just another way of saying, “On the outside you may be beautiful, but on the inside (where it REALLY counts) you are worthless…. At least you are worth less than I am.” And here’s the thing: I AM funny. I AM deep. I AM clever. But how much of my intelligence am I really responsible for? Am I any more in control of my cleverness than some dude is in control of his symmetrical face?

On Wednesdays, we wear pink.

It doesn’t matter if it’s a group of really hot Mean Girls making fun of someone’s clothes, or some really smart tech guys making fun of everyone who doesn’t know how to program a computer, or me looking down on someone who doesn’t get the joke–It is that dark thing behind it. That gross thing underneath it. It is that sick part of our humanity that labels something “Not Like Us,” and works to diminish it. And calls it worthless…. Or at least worth less. And it might even work for a bit to feel better about ourselves by making others feel worse…. Right up until we encounter someone who is way better looking, or way smarter, or way funnier. And then we feel inferior and worthless ourselves. I follow a writer whose prose routinely makes me feel dull and uncreative, and I follow another writer whose insight routinely makes me feel lacking and shallow…. We spend most of our days in a dysfunctional balance between feeling better than most and not as good as others. 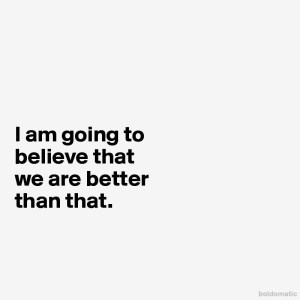 Even If I’m wrong, it’s a better way to live.

And part of our responsibility in that calling is–if we are able–to stand up FOR the people whom the world tells the lie that they are not worthy of being loved, and we tell them the truth that they are the Beloved of God. Also, I believe the other part of that responsibility involves standing up TO the people spreading the lie that Different=Bad. But letting them know that they are getting it wrong does not have to look like a giant argument or calling someone hateful–It can just be speaking the truth to the ones who are being told they are unworthy. I don’t want to demonize people whose reaction to Caitlyn Jenner is one of laughter and bullying and cruelty…. Sometimes I think that is truly the only reaction available to some people. But for those of us who are capable of loving people who are different–even drastically different–I believe it is our responsibility to stand up and proclaim to people who are being hurtful, “You are better than that. I am better than that. WE ARE BETTER THAN THAT!

This is a picture of a human being.

I am not loved because of the how funny I am, or how smart I am, or the clothes I wear, or how much I make, or the name I call myself, or even because of my intact male genitalia. And it is not what Caitlyn Jenner looks like on the outside that makes her worthy of being loved either. It is not how smart or clever she is. It’s not how high she can jump, or how far she can throw the discus. It’s not which pronoun we use when referring to her. She is loved, not because of who SHE is, but because of who GOD is. She is loved because God is the Great Lover. And as we realize that truth, and embody that truth, we become more like Jesus. And as more and more of us become more like Jesus, it starts to look like “The Kingdom of God.” And the movement of the Kingdom of God is a movement toward letting go of comparison and judgment, widening the area of peace that comes with knowing we are the Beloved, and living out of that place of contentment in a way that lets everyone around us know that they are every bit as loved as we are.

So if you are posting mean things about Caitlyn Jenner, please stop. She is a human being, and what you are doing is bullying. And it’s hurtful. The consciousness of the world is expanding, whether you like it or not. It’s not moving as fast as many of us would like, but it’s moving nonetheless. And I know, I know…. It’s frustrating when you want to make racist or homophobic jokes, but you feel like you can’t because it’s not appropriate anymore. And even though it feels making fun of people who are transexual isn’t off limits yet, it is. And even though you probably blame this changing tide (and even this post) on “Political Correctness,” it’s actually not. It’s the world seeing your “jokes” and exclusion and discrimination for what they are, and calling it what it is: Plain old cruelty.

In closing, please take a few minutes and watch this amazing and insightful video from Russell Brand. If you call yourself a Christian, and Russell Brand is sounding more like Jesus than you are, that SHOULD raise some important questions. You might not be able to hear it or see it yet…. You might just hear “Blah blah liberal, blah liberal blah,” but the world sees it. It stinks of hypocrisy, and it is the reason the Church is shrinking.