I was perusing the ol’ Facebooks earlier today, and I ran into this picture:

Here is quote from a “Christian” on the Facebook thread under this picture–“Very hilarious when all of you unbelievers burn for eternity, I myself wouldn’t want my worst enemy to suffer that way, so criticize the Lord all you want, but I feel really sorry for you. I will be praying for all.” And we wonder why so many people are leaving the Church…

This meme represents a very common belief in Christianity–The idea that “Jesus got what you deserve.” Which is, I guess–as most Christian theology suggests–an agonizing death on a cross, and three-ish days in hell. Most of the Church believes that we (humanity) are all worthless (Total Depravity), and that we all deserve to go to hell to be tortured forever. The other side of this coin is the concept is know as “Atonement,” and for much of the Christian Church, this is a central tenet of their theology…. And thus a central tenet of their understanding of who God is.

“Quid pro quo, Clarice.” Sometimes my old understanding of God seems more like Hannibal Lecter than it probably should…

There are many different understandings of Atonement, but most of them have to do with making reparations for wrongs. In the Old Testament (as well as much of the Old Testament world), the process of “making things right” between God and mankind was accomplished through sacrifice. The world–for thousands of years–has had a model of taking care of sin and evil that basically boiled down to “blood for blood.” It was quid pro quo… tit for tat… An eye for an eye. To people living in the earliest, most fear-filled stages of human consciousness, God was (is) a wrath-filled being for whom only perfection was good enough. He was (is) the angry volcano God, demanding our virgins be tossed in, in order to propitiate his violence (Propitiation is the process of appeasing the wrath of God. As in, “He is the propitiation for our sins, and not for ours only but also for the sins of the whole world.” ~ I John 2:2… I say this to mention the fact that this way of seeing things is definitely in the Bible).

For example, take the story of Abraham hearing from God that he was going to need sacrifice his son Isaac. The point of this story is not that God sometimes requires human sacrifice. Or that God is the sort of Being that pulls a giant “PSYCH!” on the people he supposedly loves (“Ha! I totally had you going there, Abe. Man, you should have seen your face… You were like, ‘Is this dude seriously going to make me kill the son he promised me?!? You were TOTALLY crying… And now you’ve got some tears on your tunic.” **God points at Abraham’s tunic, Abraham looks down, God flips Abraham’s nose** “GOTCHA AGAIN!!! When are you going to learn?? If I was tweeting this, I’d end it with #sucker.” ~ God). But the Bible does not give a target as much as it provides a trajectory. It shows us a direction–An expanding and unfolding understanding of the heart of God for the creation that he loves. 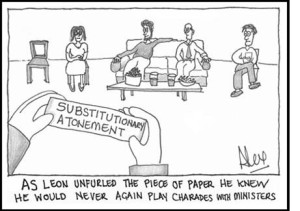 Don’t play charades at my house either…

So listen–in the time in which the Bible was written, human sacrifice was common enough that everyone knew about it. The gods were pissed, and it was believed that in order to appease their anger and punishment, you had to give up your best stuff… crops, animals, sometimes even your kids. So when they told the story about Abraham going up the mountain to sacrifice Isaac, they were all probably like “I know how THIS is going to end.” But in that Biblical story, whether there was an actual person named Abraham who was 100 years old when he had an actual son named Isaac with his 90 year old wife Sarah was not the point–the POINT was that THIS God–THEIR God–is DIFFERENT… Different than those mysterious and capricious gods who demand blood to keep their wrath at bay. And sure, in this story they only moved away from human sacrifice to sacrificing a ram (one which God provided)… But that was at least SOMETHING. Baby steps, right? Baby steps toward the heart of God. And God, in his loving and patient way, only reveals the extent of his goodness that our hearts and minds are ready to hear.

So the old model of how atonement works was basically this–We’re all garbage, and as we embody that garbage (sin), we put our sin on an animal, and then we kill that animal (or scapegoat it), because God requires blood. God requires that TRANSACTION. But the Old Testament is full of verses that speak of how God is not really interested in transaction–He is interested in transformation. Psalm 40:6 says, “Sacrifice and offering you did not desire– but my ears you have opened.” I Samuel 15:22 says that “to obey is better than sacrifice, and to listen than the fat of rams.” Jesus himself quoted Hosea when he said, “But go and learn what this means: ‘I desire mercy, not sacrifice.'”

Atheists be like, “So let me get this straight–You’re telling me God had to sacrifice himself to himself to change a rule that HE MADE?!?”

And so, to me it makes infinitely more sense that, as Richard Rohr says, “Jesus did not come to change the mind of God about humanity–it did not need changing! Jesus came to change the mind of humanity about God.” What if we’ve been getting this Atonement model wrong all along? Because the thing is, this model–with all of our sins being put on Jesus, and him being punished for them–It doesn’t even make any SENSE. We tell this story because it fulfills a desire in us for justice–for a transaction–but killing someone who is innocent for the crimes of the guilty is the farthest thing from “justice.” Imagine with me for a moment…

Let’s say I had a town. It’s actually my town. It’s called Boeskooltown, and I make the rules. And the people in the town are there because I allow them to be there. In this town, what I say GOES. I know what’s happening in my town, and I’m powerful enough to enforce the rule…. Rules that I created.

Imagine there’s a middle-schooler living in Boeskooltown… Her name is Emma (because every middle schoolers name is Emma. Because Friends). She is sweet and awkward and funny, and sometimes afraid and annoying and selfish. Now, let’s say that Emma’s step dad–A grown-ass man named Jimmy–just beats the actual hell out of Emma… Like “barely even recognize her anymore” kind of beating.

Now imagine that I, as the man in charge of the town, reveal a way–because I love the citizens of my town–of forgiving Jimmy. And that way is this: Instead of punishing Jimmy for the awful thing that he’s done, I’ve decided to punish my own kid, who is completely innocent of any crime. And then I tell you all–Citizens of Boeskooltown–that my punishing of an innocent for Jimmy’s crime is actually because I demand… (wait for it)… “Justice?” Is there any better example of INJUSTICE than an innocent person being punished for someone else’s crimes? Is there a scenario where this makes sense–Especially if I’m the one making the rules?

Wait, the Good Father Jesus spoke of  REQUIRED this?? That’s certainly enough to make people fear him… but LOVE him?

Atonement says, “Someone has to pay for this,” but every single thing about Jesus–His words, his life… even his death–reveals and embodies a God who does not function that way. Atonement says, “Something has to die!” but Jesus looks at us and says, “That something is you–The false you.” Atonement looks for a way to span the perceived chasm between us and God, but the Incarnation and the Word of God cry out “Emanuel! God is with us!” Atonement says “An eye for an eye,” but the best picture we have of God says, “You have heard it said… but I tell you…” I mean, Jesus flat out tells us that loving our enemies is being like God. If there was something that atonement needed to “make right,” it was our understanding of the nature of God. 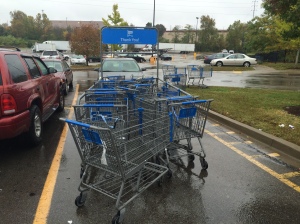 All you have to do is look at this picture of these shopping carts to know that there is human brokenness. And yeah, I went to Walmart. I’m part of the problem. Leave me alone, I’m poor.

Then Jesus dies–in such a horrible way–and we’re left trying to make sense of it all. And that ancient voice speaks up and says “Our brokenness was (is) too much for God to handle.” For thousands of years, humanity was unable to believe in, or even imagine, a God who was loving enough to love us in all of our brokenness. And I am not oblivious to the brokenness… One needs only open your eyes to see it. But there is goodness in humanity as well. And just in case no one has ever told you before–You don’t deserve to go to a place called “Hell” where you are tortured forever. You are not worthless. You are loved by God. And your brokenness is not too much for God. He still looks at us–his creation–with the same loving eyes he had in Genesis 1, when he said “Very good.”

Grace is a chopper, baby. 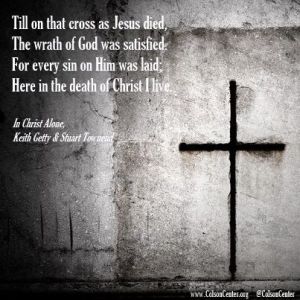 We want all the accounts to be paid, because the real thing that offends us is grace. We look around at all this mess, and we say “SOMEONE HAS TO PAY FOR THIS!” And to hear otherwise offends us to our very core, but that is what God has been saying all along. He’s been saying “You can trust me. I love you, and I’ve got this. Now LIVE that way.” He said (says) it in creation, he said (says) it in the incarnation, and he said (says) it in the life, death, and resurrection of Jesus… It’s just that people weren’t ready to hear it. And this is why Jesus said, “There is so much more I want to tell you, but you can’t bear it now.” Many of us still cannot bear it yet; nonetheless, Jesus still speaks to us today: “Go and learn what this means: I desire mercy, not sacrifice.”

Today’s Patron shout out goes to Logan Arkema. It makes me feel really old to say that I can clearly remember when this dude was BORN. What a fine young man he has grown to be… Thank you, Logan, for valuing what I do enough to help support it. If you want to be like Logan, you can do that HERE. Also, if you want to ask me something directly you can do that on Twitter or also on Facebook. I love discussing this stuff.

This entry was posted in 1) Jesus and tagged Atonement, Christian Theology, Christianity, Grace, Human Brokenness, Jesus, Jesus Got What You Deserve, Miracle Gro For Atheists, Someone has to pay, Substitutionary Atonement. Bookmark the permalink.

36 Responses to Substitutionary Atonement Is Miracle Gro For Atheists