Posted on December 5, 2018 by theboeskool

I’ve known the Apostle’s Creed by heart since I was about five years old. It’s one of the things that happens when you grow up in a conservative little Christian Reformed Church in small town Michigan. We said it every Sunday. But really, anyone who’s ever spent any time in Church before has probably heard it. There are other Creeds, but the Apostle’s Creed (along with maybe the Nicene Creed) is probably the most famous. It’s meant to be a sort of bare-bones, bare minimum of beliefs people profess who want to call themselves Christians. Here are the words to it (though there are certainly different versions out there):

I believe in God, the Father almighty,
creator of heaven and earth.

I believe in Jesus Christ, his only Son, our Lord,
who was conceived by the Holy Spirit
and born of the virgin Mary.
He suffered under Pontius Pilate,
was crucified, died, and was buried;
he descended to hell.
The third day he rose again from the dead.
He ascended to heaven
and is seated at the right hand of God the Father almighty.
From there he will come to judge the living and the dead.

I believe in the Holy Spirit,
the holy catholic church,
the communion of saints,
the forgiveness of sins,
the resurrection of the body,
and the life everlasting. Amen.

I remember the mesmerizing rhythm to it… The way the congregation magically knew EXACTLY how long to pause between phrases… The way we all took breaths at the same places… The way the S sounds danced in the words “communion of SAINTS, the forgiveness of SINS,” and then hung in the air for a bit…

For us, the thought of having to LOOK AT THE WORDS was just insane. EVERYONE who was “in” knew them by heart. If someone had to actually open the hymnal to read those words, they had to be a newbie. But good for them, you know? Cute little baby Christians. They’ll get it some day…  But the thought of someone standing there in silence as we recited that profession of faith was just… UNTHINKABLE. They would be outing themselves as a non-believer… Rebellious and Hell-bound… An apostate. Now take 10 seconds to watch the person 80% of White Christian Evangelicals voted for:

This is your "Christian" evangelical president. pic.twitter.com/u0478FoSyR

In fact — It’s short… watch it a few times. I’d be willing to bet that he and Melania are the only people in that church who are refusing to say the words to the Apostle’s Creed. And like I said before, there are multiple different versions of the AC, so reading the words in a setting like this is certainly understandable, lest you find yourself being the only one in the place saying “Catholic Church” while everyone else is saying “Christian”… or you find yourself being the only schmuck blurting out the word “Begotten.” But just observe how defiant he looks. This is the guy you chose. This is the guy all those FAKE “christian” leaders like Jerry Falwell, Jr. and Franklin Graham and Robert Jeffress and Paula White (among MANY others) ASSURED you was “born again.” 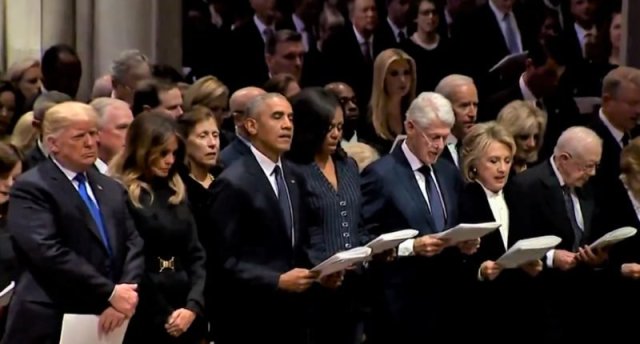 My beliefs have changed A LOT since my days of proudly reciting from memory the Apostle’s Creed while standing shoulder-to-shoulder with other conservative Christians. If I broke down that Creed line by line, there are many of those lines I wouldn’t be able to sign off on… at least not without an asterisk or two. There are many people in the world who would say that I’m not a Christian anymore, because I don’t believe the “right” things… Because I’ve let go of the need for Hell, and the Monstrous God who would send us there with no hope of redemption… Because I believe there is nothing inherently “sinful” about being someone who is LGBTQ+… Because I believe that God ISN’T in control of everything… Because I believe that following Jesus is wholly incompatible with supporting the horrible and immoral man defiantly standing in silence as a whole church recites the Apostle’s Creed. But even though I may never darken the halls or sanctuary of a Church again, I still BELIEVE… I still FOLLOW… I still LOVE JESUS. And I could still stand next to them and corporately confess that fact.

Every time someone delivers a eulogy for an American statesman in the age of Trump, it sounds like they are attacking President Trump—not because they are, but because they are praising a sense of basic decency, a trait that is so obviously absent from the current president.

I’ll leave you with this amazing tweet from an amazing woman. It’s the truth. I co-sign…

I truly fucking meant that shit. I left BECAUSE I meant it with my whole entire self; not because I didn’t.

If you’d like to follow me on social media, the best places to do that are ON FACEBOOK and ON TWITTER. If you value this blog, and you’d like to help support it, you can BECOME A PATRON and give a couple dollars a month. If everyone who read this did that, this could be my actual job… Which would be really cool. Otherwise, if you’d like to leave a tip for something you really enjoyed (like Carol did — THANK YOU SO MUCH!), you can do that on MY PAYPAL. Thank you SO MUCH for reading.