The San Bernardino School Shooting, and Finding Hope Amidst The Trolls

I got on Facebook this afternoon, and discovered that there had been yet another school shooting. A man named Cedric Anderson checked in at the office of North Park Elementary School in San Bernardino, CA, he walked into the classroom of Karen Smith (a special ed. teacher who used to be his wife), he pulled out a concealed gun, and he shot and killed her before turning the gun on himself. Two students were also injured in the shooting. Jonathan Martinez, age 8, later died from his injuries. The other student is said to be in stable condition.

Now–I don’t want to write today about the fact that the shooter was a Christian pastor, and how that fact doesn’t necessitate other Christian pastors publicly denouncing this horrific act of violence… Almost everyone already knows that this is not what Christianity is about–Just like almost all the Muslims in the world already know that horrific acts of violence are not what Islam is about (I mean, if this guy were a Muslim, that fact would be in every headline… But for some reason, the fact that he was a Christian pastor is not getting a whole lot of press). And I don’t want to talk about the idiocy of the argument that some people have immediately started making already that “This just shows that teachers should be able to carry guns” (as if something like this could have been prevented by anything less than a teacher who had a pistol IN HER ACTUAL HAND as she taught). If someone is dumb enough to either believe or even consider something like this, there is probably not any rational argument I would be able to make to change their minds. I don’t want to talk about how the man who killed these people posted stuff from the “Father’s Rights” movement, posted stuff about gun rights and buying an assault rifle, and posted about his support for Trump here, here, and here… What I want to talk to you about today is the steady stream on “HAHA” emojis that flew across the video of the news coverage of the shooting. 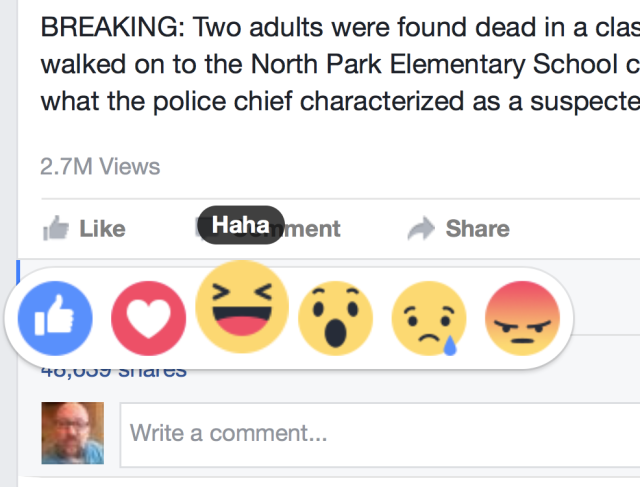 It’s hard to tell from the pixely picture, but I can assure you that my mustache IS as sexy as it looks.

If you’ve ever seen a Facebook Live video, as people react to the video, an emoji representing the person’s “reaction” floats across the video… The options are Like, Love, HaHa, Wow, Sad, and Angry. As I watched KTLA’s coverage of this tragic shooting, I was not the only person watching the coverage to notice an inordinate amount of “Laughing Face” emojis going up as they talked about the people who had died and the kids who were fighting for their lives in the hospital. I took a video of it here (it’s a video I took with my phone of a video on my computer, so it’s not the greatest quality):

I’m not sure how easily you can tell, but I took a random 30 seconds of video, and when I went back and counted, in that 30 seconds, there were 60 reactions. 32 them were the laughing “HAHA” emoji. As I continued watching, that ratio seemed about right. Roughly HALF of the faces that floated across the screen were laughing. You can see the Facebook Live video below.

Also, if you’re still confused as to how someone like Trump could get elected, just read some of the comments below this video AT THIS LINK… There are all kinds of important theological conversations going on there. Here are a couple examples:

This is what so many Christians sound like… We’ve become a punchline. And the truth is, this kind of theology DESERVES to be a punchline.

Anyway–Laughing emojis. Two kids got shot… Murder-suicide at a school… In front of kids… And it seemed like a whole lot of people are clicking on the Laughing emoji. People were making comments like, “What is WRONG with you people who are laughing at this?” and “This is why I hate humanity.” There is something about watching stuff like this that injures the deepest part of me. It hurts my soul… My spirit… My hope. So as I sat there in disbelief–watching all those people take a moment out of their lives to represent that they think school shootings are humorous–I decided to see what the actual totals were of the reactions. Here is what I saw: 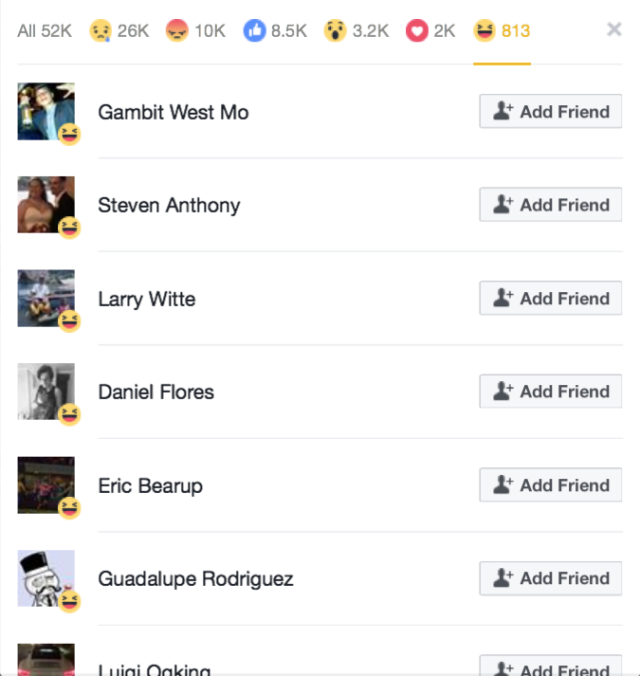 So. Of the 52,000 or so reactions to the video, roughly half were people who expressed sadness. And about one fifth were people feeling angry… But just over 800 people had thought to LOL at this tragedy. But as I watched, that didn’t seem to make sense. AT LEAST HALF of the total emojis coming in were laughing. So I checked the running tally for HAHA’s, went back to the video and counted out about 100 laughing faces in about a minute and a half, and then refreshed the page to see if those new HAHA’s were counted on the totals. But here’s the interesting thing: The running tally of the HAHA’s only went up by six. And here is what that MEANS: It means that there were a handful of A-holes clicking and reclicking on the laughing emoji… probably getting whatever F’ed up sexual thrill internet trolls get when they make people feel like the world is turning more and more into a shit hole.

And that is the narrative of the Troll: They have fallen for the lie that the world is a hopeless shit hole, and they’re trying recruit as many people as possible to live in their sad existence. When I clicked on a few of the first names of the list of people who decided to laugh at a school shooting, here are the sorts of memes I found on their pages: 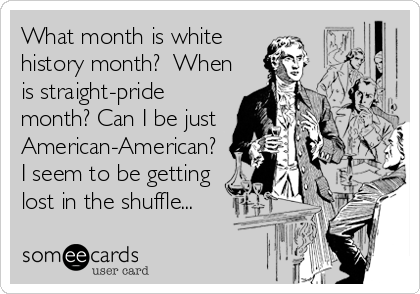 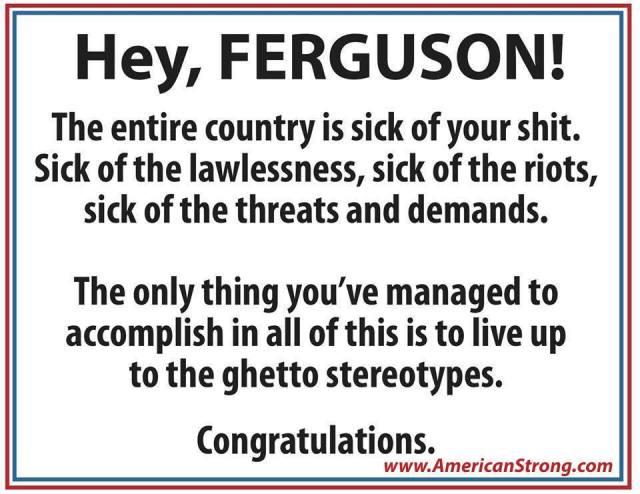 Yeah… THAT sort of person.

If only you knew…

Ah yes… Back when America was “great.” Before “pussies.”

Here is what Trolls do: They try as hard as possible to hurt you, and then they make fun of you for being able to be hurt. And they pull out words like “snowflake.” And “pussy.” But being able to FEEL things IS strength. The ability to be offended is strength. Having compassion for people other than yourself is STRENGTH. The only ones saying otherwise are the ones who have already given up. And their misery LOVES company…

And the sad thing is, sometimes it works. Sometimes people see too many of these things, or they see how many people have “liked” pictures like these, or they read one too many comments, and they just… Give up. They lose hope that things could ever get better. It’s understandable… I consider it every now and then. The waves of bigotry and ignorance and hatred erode my optimism. Because Trolling is a disease of the soul… But HOPE is the antidote.

This is the picture I have in my head whenever people online use the term “Social Justice Warrior.”

So today I waded into the tragic shit storm that is an elementary school shooting. I found a bunch of fake christians making comments that blamed this tragedy on lack of prayer in schools and not having enough guns. I stumbled into a nest of internet Trolls–bereft of hope–who were doing their best to spread their misery. And somehow–I’m not sure how it happened–I’m going to fall asleep tonight feeling more hopeful than I have felt in a really long time. I guess I just saw them for who they are: Pitiful. And sad. And fake. And hopeless. The vast majority of the people in the world are filled with an appropriate sadness when they hear about another school shooting. So many of us are filled with a righteous anger that these things keep happening. And yeah–There are a few people who are so broken that they laugh at stuff like this. Even a few is way too many… But there aren’t nearly as many as it seems like there are.

Here’s the moral of the story: Sometimes the stuff that makes you feel like giving up… The stuff that makes you feel like hope is for suckers… The stuff that makes you feel like the good things about humanity are hopelessly outweighed by the bad things… The stuff that fills us with despair when it seems like every fight is a losing battle… SOMETIMES all that is is a bunch of little A-holes who are so invested in making the people around them miserable that they go out of their way to be as offensive as possible. Sad remnants of people, sitting around trying to inflate their numbers. They are the sort of folks who go through the trouble of creating a fake email address in order to harass perfect strangers, hiding their cowardice in their anonymity. They treat compassion like weakness, and poke fun of a desire for something as basic and good as Justice. They are the lonely, broken elementary school bullies who have now grown up, and–thanks to the Internet–have found a dysfunctional community of other lonely, broken bullies. But the world is not full of bullies… sometimes it just seems that way because they make so much noise. Yes–there are bullies out there… And just like in elementary school, most of us are just too scared to say anything. Too scared to stand out. Too scared to take a risk. But God has not given us a spirit of fear, but of power, and of love, and of a sound mind.

It can be easy to forget that people are not completely awful. On days like today it can be easier than others… Like when a small group of people who wear the term “deplorable” like some demented badge of honor spends their time posting laughing emojis just to piss people off. But the truth is we’re winning. History testifies to this fact. There are rights we have today that people 100 years ago wouldn’t have even dared to DREAM about. And even when we lose, our losses lay the foundations for our future victories. Yes, there are people whose fear and ignorance makes them long to go back to an often imaginary time which nostalgia and privilege turn into a time that was “great.” And yes, that same fear and ignorance often compels them to troll and attack people whose hope is viewed as a threat. But we are winning. LOVE is winning. The moral arc is bending. The Kingdom is coming. Hallelujah!

Let us hold each other up when the ones around us feel too weak to stand! Sometimes we are the ones doing the holding, and sometimes we are the ones who need help. Thank you so much to Anne Detraglia, my newest Patron. Thank you for helping to hold me up when I am feeling helpless and hopeless and I start to forget that Love is so much stronger than hate. You have done this so many times with comments on my Facebook page. Thank you. If you’d like to become a Patron and help support this blog, you can do that RIGHT HERE. Or you can also give on PayPal, if you feel like LEAVING A TIP. Otherwise, follow me on Facebook or on Twitter. Now let’s get energized… There’s work to do!

3 Responses to The San Bernardino School Shooting, and Finding Hope Amidst The Trolls