Last night I sat in my driveway with tears in my eyes, and I listened to the end of a story on NPR (specifically a story on RadioLab titled “One Vote”). You ever hear a story that is SO AMAZING that you can’t believe that you haven’t heard it until that very moment? It’s a story about Nashville, Tennessee… A story I had never heard in the 16 years I’ve lived here. And it’s a story you should probably know about. 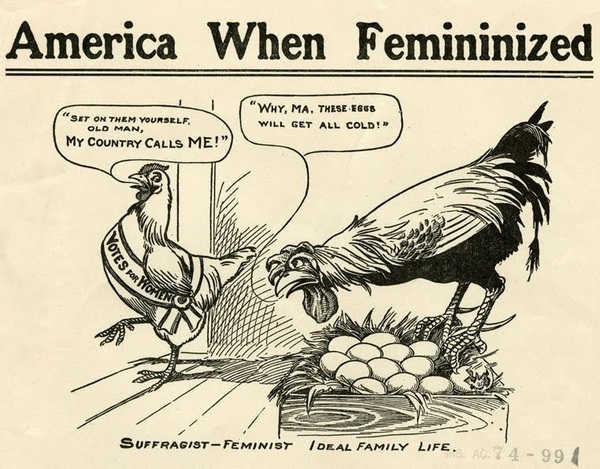 Here’s an early 1900’s ad against women’s suffrage… Although spend ten minutes on Twitter, and I’m sure you can find something similar on Alt-Right accounts.

This story is about women’s suffrage… The right to vote. And I want you to know about this story for a few reasons. 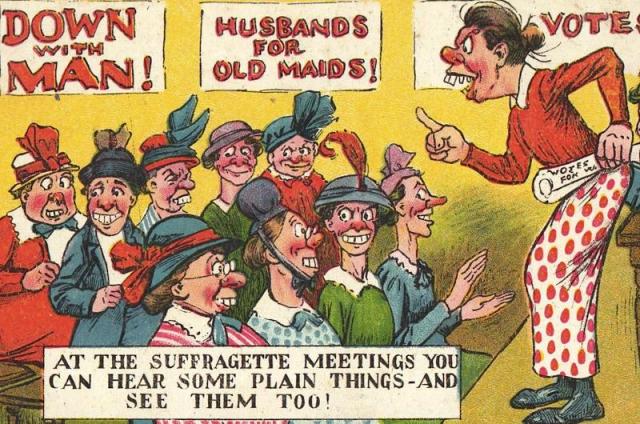 Translation: All the women for equal rights are ugly.

The 14th Amendment was adopted on July 9, 1868. It is a fascinating Constitutional Amendment, but one of the things it did was guarantee the rights of citizenship to people born in the United States. And one of those rights was the right to vote. The 14th was an Amendment that came out of Reconstruction. There were a whole lot of women who helped the cause of the abolitionist movement, so when the 14th Amendment was being written and debated, many women involved in the fight for equal rights thought that women would be included in the 14th Amendment’s language concerning suffrage. But at the last minute, the word “male” was inserted into its language, so the right to vote in 1868 was guaranteed to “MALE citizens twenty-one years of age.” But not women. Women would have to wait another 52 years for that right.

Fast forward to 1919, when Congress voted for the 19th Amendment, which would give women the right to vote. But in order for that Amendment to become part of the Constitution, it has to be ratified by by three fourths of the states. And in 1919, since there were only 48 states, that meant that the suffrage movement needed 36 states. Thirty-five states voted to ratify, but it was being defeated in many of the other states. The pro-suffragist movement looked at all of the states left to vote, and the only state where the vote was close enough to having the possibility to pass was Tennessee. So in the summer of 1920, everyone from the pro-suffragist movement and everyone from the anti-suffragist movement descended  on Nashville when a special session was called. You really need to listen to the story on RadioLab… It’s so good (The whole podcast is good, but if you want to just hear the drama surrounding the vote, you can start at 30:42). 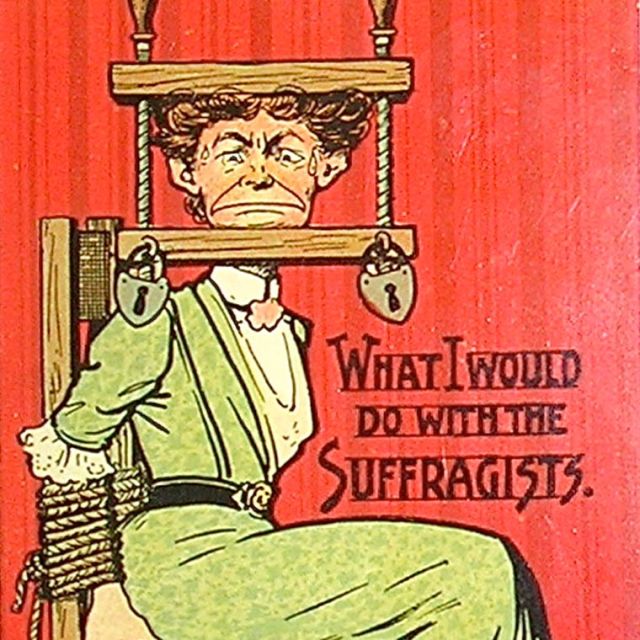 Back when America was “great.”

So in case you don’t listen, just know it was a dramatic scene. Both the pro-suffragists and the anti-suffragists set up their headquarters at The Hermitage Hotel–In Nashville. In August. With no air conditioning. Everyone wore a rose on their lapel–Yellow for a Yes vote, and Red for a No vote on ratification–and it became known as “The War of the Roses.” They called the ones for ratification “rats.” There was wheeling and dealing, and there were dirty political tricks… Like forging letters and telegrams from lawmaker’s families telling them that their wives or kids were deathly ill, and they had to come home right away. When it finally came time for the vote, they counted the roses on the floor… 48 yellow, and 48 red. After two separate 48-48 votes to table the vote (essentially killing the Amendment), at the last minute the youngest member of the General Assembly, a 24 year old named Harry Burn–a young man wearing a red rose–considered a letter his mother, Febb Burn, had written him telling him to “be a good boy” and vote for ratification, and he changed his “No” vote to a “Yes.” And with that one vote, the 19th Amendment to the U.S. Constitution was ratified, and American women won the right to vote. 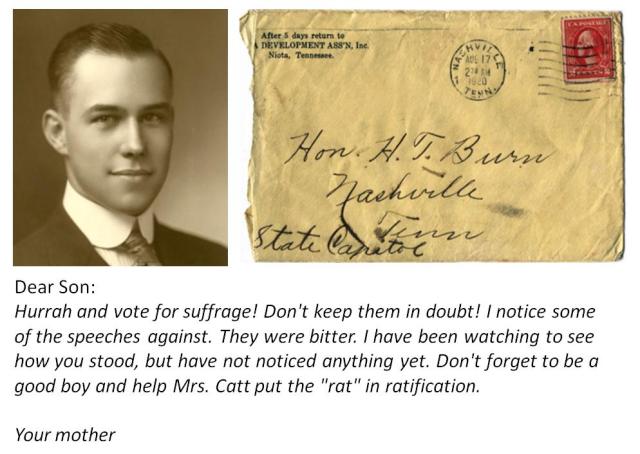 Well… WHITE American women won the right to vote. Jim Crow laws were still strong in the South, and the Voting Rights Act was still another 45 years away. Even today, we still have gerrymandering based on racial demographics, we still have voter ID laws that are designed to make it harder for people of color to be able to vote, and we still have laws designed to disenfranchise people who commit crimes, while convictions and enforcement of those crimes is more focused on people whose skin in black and brown. But still… The 19th Amendment was a victory for human rights. And even though there is still much to fight for, it was undeniably a step in the right direction. 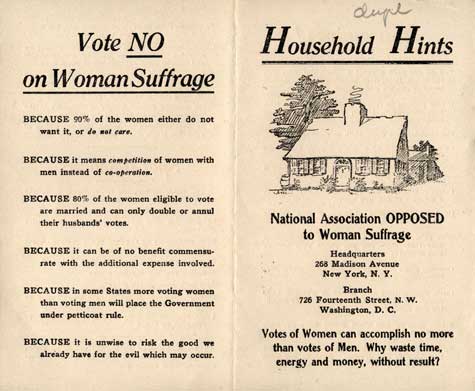 “Because it means competition of women with men instead of co-operation.” ~ The person writing this had to be laughing.

There are times when something moves through the consciousness of the world… Times when the world–for whatever reason–starts to wake up a bit. And around this time, the world was waking up a bit to the full humanity of women. New Zealand passed women’s suffrage in 1893; Australia in 1902; Finland in1906; Norway in 1907; Iceland, 1913; Denmark, 1915; Russia, 1917; Austria, Canada, England, Germany, Hungary, Ireland, Poland, Scotland, and Wales all gave women the right to vote 1918; Holland and Sweden in 1919. The United States is far from anything close to a “leader” in women’s rights. One of the main arguments against suffrage in the U.S. was that all women having the vote would do is either double a husband’s vote, or negate it… Either option being unfair to men. I’m going to end this paragraph while you think about that for a minute (And while you’re thinking about that, perhaps revisit this post titled “The Real Reason You Hate Hillary Clinton”)… 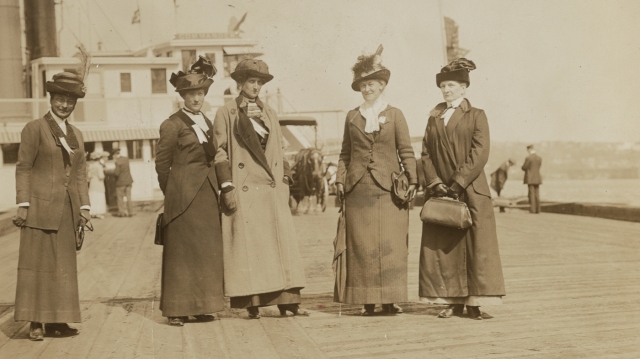 This story in interesting to me for so many reasons. While I was researching this story, one thing that was just crazy to me was how many of the anti-suffragists were women. It reminded me of the gross feeling I got when I saw females wearing “Women For Trump” T-Shirts. But there are always going to be people who are duped into believing they should vote against their own interests. And there was so much racism involved in the opposition to women having the right to vote… The last thing white folks in the South wanted was a bunch of black women canceling out their votes. There are so many interesting and inspiring parts to the story of women winning the right to vote. But again, one of the most interesting things about this story was the fact that I had never heard it before. Harry Burn was 24. When I see people who are 24, the look like KIDS to me now. After his vote ratified the 19th Amendment, he wrote in the House Journal, “I appreciated the fact that an opportunity such as seldom comes to a mortal man to free seventeen million women from political slavery was mine.” All the drama behind the scenes, the letter from his widowed mother (which you can see here), all of the years of hard work put in by the suffragists like Susan B. Anthony and Carrie Chapman Catt… It’s such an amazing story.

But back to my three reasons for sharing it with you. 1) This is NOT ancient history. This hatred for women is alive and well. Especially in the Church (if you don’t believe me, check out #ThingsOnlyChristianWomenHear on Twitter). There are still a bunch of powerful white men walking around trying to figure out whether they should be focusing their political influence on limiting women’s rights or limiting the rights of people of color. For many, many people in this country, any movement away from white-centric, male-centric United States is a threatening thing, and it will be met with anger and hatred. 2) There is reason to be hopeful. The fact that women earn 77¢ for every dollar that a man makes is unacceptable, but it is way better than things were 100 years ago. The world IS waking up… Little by little. Our impatience at the pace of progress is not the same thing as lack of progress. Progress often moves in “three steps forward, two steps back.” And when we are living in a time of “two steps back,” we need to tell the stories of “three steps forward.” And 3) You NEED to vote. If you are a woman… If you are a person of color… If you are a citizen of this country, you’ve got to vote. Inform yourselves, support good journalism, and then vote. Vote for what is right. Be willing to compromise. Don’t let the best be the enemy of the good. Your vote MATTERS. The ones with all the power and the money want you to believe that your vote doesn’t matter. It does!

I am filled with hope right now. There is goodness everywhere. Thank you so much to the people who give a little each month to help support me and this blog. Thank you especially to Terri Janke who recently became a Patron on my Patreon page. They make it really easy for people to help support the content creators they value. If you’d like to become a Patron, CHECK OUT THIS PAGE. If you’d like to leave a tip on PayPal or you want to boost a post, you can DO THAT RIGHT HERE. And if you want to follow me online, you can do that by clicking on Facebook or Twitter. In this time of darkness, let us tell the stories of the light.