An Easter Sermon From A Used-To-Be Christian

I almost never do guest posts on my blog, but I really wanted you all to see this. This was written by my friend Lars… A person I’ve never met in real life, but a person I respect and love. It is an Easter sermon for those of us who find ourselves feeling less and less welcome within the walls of traditional Churches. And it is powerful reminder of the distinction between the fake, Americanized, fundamentalist, self-serving, gun-toting, wall-building, poor-people-demonizing, diversity-hating “christianity” that continues to throw its support behind the immoral leader of this nation… And the sacrificial, empowering, liberating, neighbor-loving, badass narrative of Jesus of Nazareth. It fits right in with my usual “Jesus, Politics, & Bathroom Humor.” Enjoy!

Easter is weird, you guys. And this year marks an interesting milestone. I have now been “church-free” for 10 years, as many years as I was actively involved in the Evangelical community. During the first decade, people called me “Pastor Lars.” I forsook grad school and went into full-time ministry out of college because I had a white-savior complex, among many other issues I’ve been working through. Nine years ago I cleared the room and sat alone with my mom, who had taken her last breaths ~2 hours before. Multiple people had “prophesied” over me that I had the “gift of healing” and “would raise people from the dead.” So, I laid my hands on my own mother and begged God to raise her from the dead. Her body only got colder. Meanwhile, Evangelicals across the country, including in my own church, regaled their politicians that the proposed health care law that would eventually be watered down into the Affordable Care Act was a tool of the anti-Christ to establish “death panels” under the banner of “socialized medicine.” As if our broken health system needed any assistance in the former, and as if one’s health wasn’t an intrinsically social phenomenon in the latter. As if my mom’s uninsured life wasn’t worthy of saving. 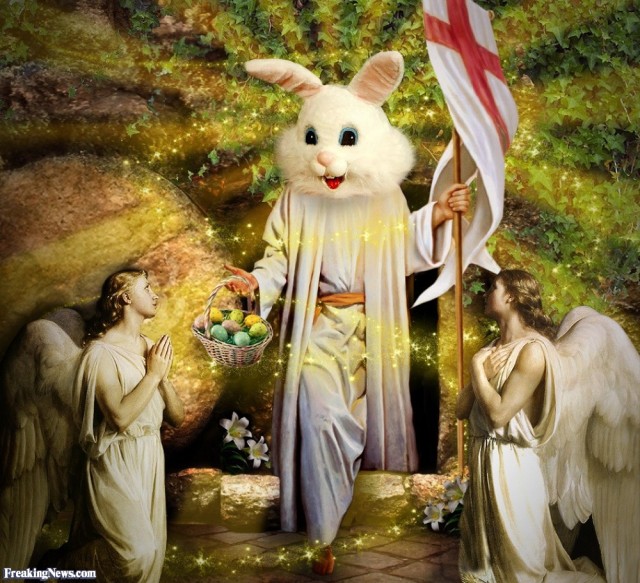 And lo, Jesus appeared on the third day with eggs adorned in pastel colors, cleverly-shaped Reeses Peanut Butter Cups, and angelic Peeps for all his angelic peeps.

I have come to hate “Easter.” The stupid bunnies and eggs and “He has risen!” platitudes that are completely divorced from what the world would actually look like if followers of Jesus embodied the power of the resurrection in a world intent on imploding upon itself.

Easter, despite its appropriation of astrology and pagan fertility rituals (seriously, early Christians were either fucking snowflakes or syncretistic buttholes), should actually catalyze the restructuring of society as we know it, should Jesus’ followers give a damn.

You see, Easter, the resurrection, is rooted in the story of the Exodus, which is the controlling narrative of the Hebrew Bible and Christian scriptures. A people enslaved and brutalized by a foreign kingdom are liberated from bondage through a series of miracles that make their survival viable. Yet, rather than catch their breath and return to whoop the ass of the occupying empire, the former slaves are called by God to create communities where everybody has enough and nobody has too much. The post-Exodus followers of God are called to establish a society defined by equality. Organized into 12 distinct groups, this community of communities is called to be a beacon of a new way of life in the face of a brutal empire. When the life-sustaining manna fell from heaven, the greedy bastards who hoarded their culinary currency found their excess rot before their eyes each day. Those who could not gather enough – the poor, the blind, the disabled, widows, etc., miraculously had their portions filled. Every. Single. Day. The God that liberated this community reminded them ad nauseum that “You have been slaves in Egypt, don’t you dare do to anyone the horrors you’ve experienced yourselves.” Of particular emphasis in these messages was caring for the poor, orphan, widow, and immigrant. Everyone, particularly the outcasts, were to be welcomed, if not highlighted by the new society.

But, God’s people fucked it up. As we do. So, God sent her kid to clean up the mess. And amidst the healing, and the miracles, and the radical teachings are these weird occasions where a bunch of people are hungry and won’t leave God’s progeny alone. And so this dude, Jesus, tells his 12 buddies to make everyone sit down in groups (see above), and proceeds to feed the undeserving masses from a ridiculously small amount of food on hand. Nobody “earned” it, none of it was “means tested.” If you were there, you were split off into a group and fed. Period. Until everybody had enough and nobody had too much. We know this because a ridiculous amount of leftovers were gathered, and of all the amazing things that occurred that day, this is one of the few observations that was documented. Think about that.

And then God’s kid gets in trouble with the law through no fault of his own. And yet he actively walks toward the state that wants to kill him for insurrection. He *literally* holds his hands up, and out, as armed agents of this state proceed to torture and execute him. As his mother watches. As his best friends watch. As the community watches. He is mocked by talking heads. He is murdered.

And then this miracle happens where the dude appears again and we don’t believe it, then we do, then we don’t, then we do. And the story of Easter stops here because we operate on linear Western chronology now and don’t have the capacity for hindsight and context that previous societies did, and we’re now “saved” because of this badass defeat of death that Jesus did. Saved. From what? You can’t be saved from something that isn’t oppressing or threatening to oppress you. Meh, most of us will carry on with our lives and tell this cool story over beers, pretending as if we were there and it was amazing…

And yet a few people were there. And they didn’t do that. They followed the guidance of this crazy-ass miracle dude and waited for his command for their next steps. Yet, when they came, these directions weren’t to kick the Empire’s ass. Weren’t to plunder the fuckers who oppressed them and their friends. What was the immediate response after the miracle dude blew through town? The dude’s followers sold all of their possessions and gave to those in need. They established radical communities where everybody had enough and nobody had too much. The dudes who lied about having too much got struck dead (kinda harsh, IMO), while those without were miraculously provided for.

This isn’t an accident. All 3 of these stages confirm the Exodus as the controlling narrative of Scripture. Folks steeped in the Christian tradition should readily recognize these 3 stages as “Father. Son. Holy Spirit.” though they aren’t taught that way. The idea that God’s purpose for society is to liberate those in bondage that they may then become agents of radical communities where everyone has enough and nobody has too much is completely antithetical to American society. We live with mindsets of scarcity. Of “Death panels” and fear of “socialized [insert something that helps others].”

Evangelical Christianity no longer looks anything like the Gospel. Like anything associated with Jesus or the badass narrative above. Which is why I left.

But that doesn’t mean the ideals are worthless. That the radical upending of society isn’t worth pursuing. Liberation from the clutches of empire catalyzing a new way of living where everyone has enough, nobody has too much, and everyone… *everyone* … is welcome is literally the point of Easter. Anyone who tells you differently can go squeeze a goddamn egg from a bunny.

Thank you, Lars, for these honest and challenging words. Thank you for a life spent working toward building the Kingdom of God. And thank you for giving me permission to share this with the people who read the stuff I write. Happy Easter!

This entry was posted in 1) Jesus, 2) Politics, 3) Bathroom Humor and tagged Easter, Easter Bunny Resurrection, Easter sermon, Everyone has enough and no one has too much, Guest Post, Jesus, Liberation Theology, White Savior Complex. Bookmark the permalink.