When Someone Shows You Who They Are, Believe Them.

Posted on October 6, 2018 by theboeskool

Ever since multiple women came forward detailing stories of sexual assault committed by Supreme Court appointee Brett Kavanaugh, there have been many people coming forward and testifying of personal understanding of his character. Like the stories from his college roommate who said Brett lied during his testimony… That he was very drunk very often… And that when he was drunk he became belligerent and aggressive. There have been multiple colleagues and personal acquaintances and drinking buddies who have some forward to say, “I Know Brett Kavanaugh, But I Wouldn’t Confirm Him.” But there have also been people who have come forward who have spoken about how they believe that the sexual assault described by Dr. Christine Blasey Ford in her sworn testimony would be wholly inconsistent with the Brett Kavanaugh they have come to know. But here’s my important question: WAS THE HATEFUL, SNEERING, EVASIVE, CONDESCENDING, OVERTLY PARTISAN MAN WHO APPEARED DURING HIS SENATE TESTIMONY CONSISTENT WITH THE BRETT KAVANAUGH YOU HAVE COME TO KNOW? Because if he is, that is some scary shit… 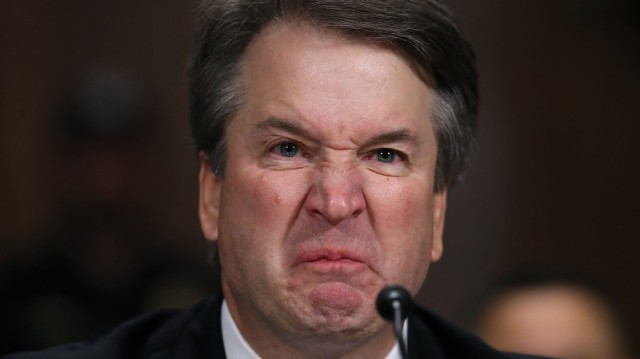 Is this face consistent with the Brett Kavanaugh you know?

So many people think this vote is about whether or not there is “proof” that Brett committed the attempted rape in high school or the the sexual assaults in college. There isn’t proof. There was never going to be hard evidence — Both the other people in the room were drunk and say it didn’t happen. But as many have pointed out before, the thing which disqualifies Kavanaugh from being elevated is NOT whether or not he drunkenly assaulted Christine Blasey Ford in high school… The thing which disqualifies him is the way he acted while giving his testimony. It was his evasiveness and his dishonesty during questioning. It was his objective lack of judicial temperament.

Judge Kavanaugh’s stunning decision to pen an op-ed bluntly confirms he has neither the judgment nor the temperament to be on our highest court. He can’t erase blaming credible sexual assault allegations ‘on the Clintons,’ attacks on senators, and vows of revenge with an op-ed.

Now he comes out and says, “I might have been too emotional.” The bile that he spewed all over that Senate Judiciary Committee was part of his PREPARED STATEMENT. When he blamed this on “The Clintons” and George Soros (without naming him), that was shit he WROTE DOWN. The face of the young man who assaulted a girl is not back in some 80’s yearbook… That slippery, sneering snake up there attacking “the Left,” that WAS the face of the dude who put his hand over a 15 year old girl’s mouth and forcibly felt her up. The person who demanded to get what he wanted thirty-some years ago is still around today…  And he’s fixin’ to be on the Supreme Court.

Listen… There are plenty of other highly qualified judges who are just as giddy about overturning Roe v. Wade who could be nominated to serve on the SCOTUS. You didn’t see people freaking out like this during Gorsuch’s nomination. Do you know WHY? Because Neil Gorsuch doesn’t have a bunch of women in his life who he drunkenly assaulted. This nomination is not about Kavanaugh’s qualifications… It is about the erosion of social norms. It is about giving a big middle finger to commonly-held notions of morality and goodness. It’s about displaying both the power and willingness of the republican party to sell their souls, and it’s about showcasing the ignorance and blind partisanship of the republican electorate.

The price of Brett Kavanaugh’s ascension to the the SC is incalculably high. It will shatter the institutional integrity of the Court and eviscerate standards and expectations for both honesty and non partisanship in Judicial nominees for many years.

Kavanaugh believes corporations should be allowed to charge you for access to the internet.⬇️ https://t.co/3ULp2wlW9Z

We — the people who are rightly disgusted with the turn this country has taken over the past few years — need to line up behind whoever has the best chance of taking seats away from these Trump-supporting hypocrites. For example… In Tennessee, where I live, there is a truly horrible person named Marsha Blackburn who is running for Bob Corker’s Senate seat. She is one of the grossest people you will ever find (I don’t have time to go into all the reasons right now, but it’s the truth. She is a damn monster). She is running against democrat and former Tennessee Governor Phil Bredesen. Yesterday, Phil released a statement saying that he believes Dr. Ford’s testimony, but he supports the Supreme Court nominee. Now, many progressives are all “Maybe we WON’T be supporting Phil Bredesen.”

I don’t know why Phil said this. I don’t know if he believes it. I don’t know if he was taking a calculated risk in a very red state. I don’t know. But here is what I DO know: If Marsha Blackburn gets elected to the U.S. Senate, it will be an unmitigated disaster. She is just another rubber stamp for Trump’s (& Putin’s) plan to redefine morality and declare war on social norms. When Barack Obama was elected, he was NOT openly supportive of same-sex marriage… But even though he was wrong on this, he was way CLOSER to right that the alternative. If we abandon the BETTER choice for the one we each believe is “best,” then I guarantee you, the WORST is going to win. For decades.

Anyway, today sucks. This time in history sucks. There is darkness all around us, and as encouraging as it is to see women taking the lead, women are not going to save us. They can’t do it on their own. People of Color are strong, but they can’t do it on their own. The LGBTQ+ vote is not going to save this nation from the moral and spiritual decay that we face. It is going to take a BROAD COALITION, and that coalition is going to have to include people from EVERY group and intersectionality… Even straight, white guys like me. But we have to come together. As the poet Jim Morrison said, “They’ve got the guns, but we’ve got the numbers.” DON’T. GIVE. UP.

Susan Collins turns her back on women who have been traumatized by sexual assault. Elections have consequences. To start turning the ship of state back towards the rule of law, decency, truth, and the preservation of Democracy, Nov.6 has to be a lot more than a blue wave. VOTE!!!

This week some wildly generous person I have never met before left me a $50 dollar tip on PayPal. Also this week, a Patron wrote me a message saying he really believes in what I’m doing here, but his financial situation changed, and had to stop supporting me. This kind of thing happens all the time and is totally understandable. I am so grateful that there are people in the world who care enough about this blog to help support it. If that’s you, and you are in a position right now where you are able to give, you CAN… You can BECOME A PATRON… You can LEAVE A TIP ON PAYPAL… Or you can just follow me on Facebook or on Twitter, and maybe even share this post. Thanks so much for reading.

This entry was posted in 1) Jesus, 2) Politics and tagged 1%, Believe them, Brett Kavanaugh, Judicial Temperament, Marsha Blackburn is a monster, Phil Bredesen, Redefining morality, SCOTUS, Social Norms, Susan Collins, Tennessee politics, When someone shows you who they are. Bookmark the permalink.

3 Responses to When Someone Shows You Who They Are, Believe Them.