This Video Proves The President Is Pure Garbage

Posted on October 1, 2018 by theboeskool

First things first… I need you to watch this video. It’s only 19 seconds long, but it might take you a couple tries to get through it, because the words that come out of this man’s smarmy mouth are so very, very disgusting. Please watch it.

Trump to woman reporter: "She's shocked I picked her, she's in a state of shock”
Reporter: “I'm not, thank you Mr. President”
Trump: "I know you're not thinking, you never do”
Reporter: "I'm sorry?"
Trump: "Go ahead"

This is institutionalized misogyny.

Now I want you to think of a woman you know…

And then I want you to think of her as your little girl.

I want you to think of her walking into her first day of school, smiling and nervous, wearing a backpack that is too big for her.

I want you to think of watching her play soccer as a kid, and encouraging her to be aggressive… Cheering for her, and yelling across the field, “THAT IS YOUR BALL! GET IT! HUSTLE!!!”

I want you to think of her telling you, in tears, about how the boys never pass her the ball when they play at recess.

I want you to think of her entering middle school, as her body starts to change, and the awkward feeling as boys’ eyes start focusing on different parts of her.

I want you to think of her gravitating toward justice… And getting the facts right… And The Truth.

I want you to think of her entering high school, and being startled by her seriousness and beauty, but mostly startled by the adult standing in front of you.

I want you to think of her opening the one acceptance letter she cared about, and her hugging your neck, feet dangling in the air.

I want you to think of her sitting in a library by herself… At night… Working hard… Goals on her mind, and dreams in her heart.

I want you to imagine the phone call, from a busier and far away place, where she tells you she got the job.

I want you to imagine her standing on a lawn at the White House, confident and strong and intelligent as hell… 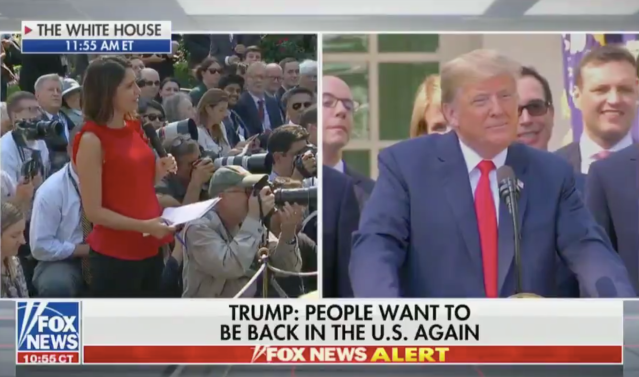 And now I want you to imagine the smirking president of the United States — A man who somehow possesses the most powerful office in the world, yet also possesses an insecurity so debilitating that he feels the need to demean everyone around him — calling on a woman and having the exchange that you just saw in that video.

Imagine him being flanked with a bunch of other powerful white men… Men who laugh at his horrible comment, like advisors complimenting a naked king’s clothing.

Imagine seeing other women standing there… Somehow managing a blank-eyed smile, like the women holding down other women to be raped in The Handmaid’s Tale.

Now imagine seeing all this — Seeing the objective grossness of the man who conned his way into power… Seeing the stomach-turning misogyny of the men at his side… Seeing the embarrassing complicity of the token women near the podium — AND THEN IMAGINE BEING SUCH A GARBAGE PERSON YOURSELF THAT YOU NOT ONLY DEFEND HIS GARBAGE ACTIONS, BUT YOU PLAN ON VOTING FOR HIM AGAIN. What kind of a person do you have to be to defend this man? Seriously.

If you can’t look at this video and know without a doubt that the president is pure garbage, then there is NOTHING — not any argument, not the most gifted orator, not William Shakespeare himself — that could convince you of his moral bankruptcy and unparalleled depravity. Donald Trump is an festering pimple on America’s anus, and he needs to be popped. And if you can’t see that, it is only because you are almost as gross as him. Shame on you…

Be sort of cool and follow me on FACEBOOK and on TWITTER.
Be totally cool and SHARE THIS with your friends.
Be even cooler and LEAVE A TIP on PayPal.
Be Fonzie-level cool and BECOME A PATRON.
But whatever you do, for the love of God, vote, Vote, VOTE!

2 Responses to This Video Proves The President Is Pure Garbage