Trump Lied About There Being “No Casualties.” Then He Dismissed Traumatic Brain Injuries As “Headaches”

After Donald Trump ordered the assassination of Iran’s Qasem Soleimani with a drone strike, Iran responded by firing 22 missiles as U.S. military bases in Iraq. Usually, a country firing missiles at our military bases would be pretty giant news… Especially if the attack on our military came as a response to a surprise (largely) unprovoked killing of a foreign military general. The Trump administration said that Soleimani’s killing was ordered to stop an “imminent attack,” but then walked back that claim in the following days when they were pressed for a more specific explanation to the question “Why now?” Iran has been our enemy for decades… Why would the U.S. government suddenly make a drastic escalation like this and put U.S. lives at risk?

Obama — along with many other world powers — tried a diplomatic solution to Iran’s nuclear ambitions… A plan that top officials in Trump’s White House said was WORKING. Regardless (and because he has made it one of his administration’s priorities to undo as many of Obama’s accomplishments as possible), Trump decided to pull out of the the JCPOA (the Iran nuclear deal), and then he decided to order an assassination which would escalate tensions with an unstable enemy.

The Wall Street Journal reported that “Mr. Trump, after the strike, told associates he was under pressure to deal with Gen. Soleimani from GOP senators he views as important supporters in his coming impeachment trial in the Senate, associates said.” So, to be clear, the president decided to assassinate an Iranian General to shore up support with some republican senators before his impeachment trial, then dishonestly claim the killing was to prevent an “imminent attack”… All with the understanding that their actions would certainly put the lives of American soldiers at even more risk. So it came as a relief to many when the president told the country there were “NO CASUALTIES” as a result of the missile attacks on U.S. military bases.

It turns out this was a total lie.

When it was reported that there were “no casualties,” it led to speculation that Iran’s attack was more symbolic than anything else, and that they had intentionally avoided injuring U.S. soldiers to avoid a military response from the United States… Kind of like a kid betting punched in the face by a much stronger bully, and then that kid trying to save face by having SOME response, but intentionally having his reaction be harmless to avoid another throttling. The dishonest “no casualties” report was also politically advantageous to the Trump administration because many people were being very critical of the recklessness of this attack, so when they said no one got hurt, Trump was able to play the part of both arsonist AND firefighter.

But after multiple reports came out saying that soldiers were injured in the attacks (blown out of towers, endured concussions, etc…), Pentagon officials finally admitted that ELEVEN soldiers were flown to Germany and Kuwait to get treatment for TBIs (Traumatic Brain Injuries). Just a few hours later, the Pentagon reported the number of casualties was actually 34 people. THIRTY FOUR U.S. soldiers received Traumatic Brain Injuries in the the Iranian missile attacks. 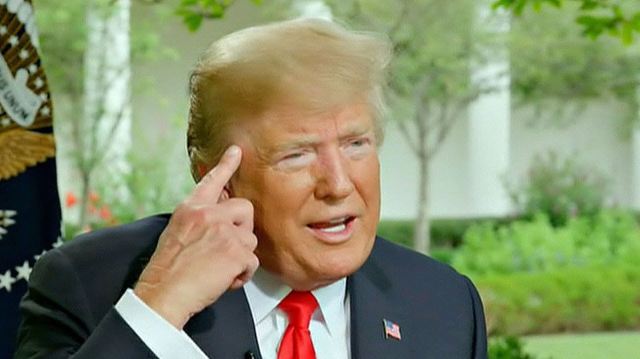 If only we could be rid of this headache…

You know what? It’s possible that Trump wasn’t technically “lying” when he said there were “no casualties.” Perhaps he mistakenly thought that “casualty” meant “someone was killed.” He is, after all, a moron… And he missed out on military service because of a “debilitating” case of bone spurs. And it’s possible that he was working with bad information when he repeatedly said that “no Americans were injured” in the attacks (though, it should be noted, it makes it harder to trust them when they tell us that no one was hurt in the rocket attacks on the U.S. embassy in Iraq yesterday). So I *suppose* a case can be made that it’s mildly understandable/forgivable that he misspoke or “mischaracterized” what happened. What is NOT understandable or forgivable is what came next…

While he was at Davos, Trump was asked the following question: “Initially you said repeatedly to Americans that after Iran retaliated for the Soleimani strike, ‘No Americans were injured.’ We now know that at least 11 U.S. Servicemen were airlifted from Iraq… Can you explain the discrepancy?” Below is the video of the exchange.

Here’s how Trump answered: “No, uh, I heard that they had headaches. And a couple of other things, but I would say, and I can report, that it is not very serious.” The journalist followed up by asking, “So you don’t think that a potential Traumatic Brain Injury is serious?” And he said, “No I don’t consider them very serious injuries relative to other injuries that I’ve seen,” and then he talked about how he has seen people with no legs or no arms and how he considers those serious (notice how his emphasis is not on the soldier’s injuries, but instead on the fact that he has SEEN those injuries… Classic narcissism). He finished up by saying, “No, I do not consider that to be bad injuries, no.”

Listen… I know that this exercise is a little played out, but I want you to imagine — for a moment — the reaction and faux outrage that would come from republicans if President Obama had said that he does not consider Traumatic Brain Injuries to be serious. Fox”News” would have spent five solid days discussing how debilitating TBIs can be to soldiers… And how democrats don’t care about the troops… And how Obama is on Iran’s side in this attack… And on and on and on. Ask any combat veteran if they think TBIs are “serious.” But instead, the GOP is falling all over itself trying to equivocate Trump’s comments, like republican Senator (and U.S. veteran) Tom Cotton shamelessly does right here:

The U.S. Department of Veteran’s Affairs has concluded that TBI’s suffered in military conflicts have symptoms which last longer than the symptoms civilians report. In Iraq and Afghanistan, 22% of all combat casualties are TBIs… Compared with 12% of combat casualties in Vietnam. People who have experienced even mild Traumatic Brain Injuries “are also at increased risk for psychiatric disorders compared to the general population, including depression and PTSD.”  Meanwhile, the suicide rate for veterans and military members is at an all time high. The VFW has demanded that Trump apologize for his ignorant and insensitive comments. Good luck with that…

Here’s the point: The Republican Party does not care about veterans… They care about using veterans to get votes so they can stay in power. Just like they don’t care about abortions… They care about using abortion as a carrot they can dangle in front of evangelicals to get them to the polls. Veterans are nothing more than a photo op to these people. If republicans cared at all about standing up for veterans, they would stand up to Trump’s completely unforgivable dismissal of Traumatic Brain Injuries as “headaches” that are “not serious.” Instead, they line up behind a disgraceful, dishonest draft-dodger who dishonors our nation on a daily basis.

I should admit that in reality, there are some probably some republicans who genuinely care about veterans… But here’s what they are worried about: They have tethered themselves to an unstable, immoral idiot. And if they break with Trump — even for something as clearly egregious as this — he will take his followers with him… leaving two smaller parties of the FRTP and the RRR (Far Right Trumper Purists and Relatively Reasonable Republicans) — NEITHER of which will be able to compete with democrats in a national election. So they justify and ignore his lying and his cheating and his corruption and his pussy grabbing and even his off-handed dismissal of the injuries to the soldiers he put in harm’s way — Just like they are justifying and ignoring the clear crimes he has committed in this impeachment trial. And it’s so very, very gross…

One thing is for sure: STOP. VOTING. REPUBLICAN.

Thank you for reading! Please get involved in some way in the political process. Put your representative and your senators’ numbers on your phone, and call them when you hear about stuff like this. Help register people to vote. Talk to your friends. Get involved. It matters who governs… Especially to people with less privilege than you. If you love this blog, and you’d like to help support it, you can BECOME A PATRON. If you’re feeling generous and you’d like to leave a tip, you can DO THAT ON PAYPAL. Otherwise, follow me on Twitter and on Facebook for more Jesus, Politics, & Bathroom Humor.