Sorority Pillow Fights, and Why I Blog

There are few things as intimidating as a 6'4" blonde girl bowling in a pair of wooden shoes.

I went to a college without any fraternities or sororities–The closest thing that we had were dorms with very Dutch names. My dorm was Boer-Bennink…. Well, more specifically, it was 1st Boer (The “1st” specified our floor. The floor that you were on was an important subset of our Dutch fraternal system. The people on the 3rd floor had to take the stairs, but they also had higher ceilings which afforded them space for more impressive lofts. Our loft was so close to the ceiling that you had to decide whether you were going to sleep on your back or on your stomach before you got into bed–There was no sleeping on your side). Boer was for the guys, and Bennink was for the ladies. We would do “floor dates,” where the gentlemen of 1st Boer would go bowling with the ladies of 3rd Noordewier, or something…. It was dorky, but a kind of fun, repressed, sexy sort of dorky. If things went as planned, you might find yourself back in your dorm room with one of those fine Noordewier ladies (everyone knows Noordewier girls are a little easy) with your door cracked open and at least one of your feet on the floor. Things never went as planned….

If I've learned anything from movies (and I have), it's that nothing good happens when you put a on a toga.

This is in stark contrast to what we knew was going down at those “public” colleges with their pagan Greek system of fraternities and sororities–Climbing over kegs and unconscious hookers just to get to your bedroom, where you would, of course, find one of your Tappa Kegga Brew frat brothers making sweet, pagan love to some drunken sorority girl who stumbled over to your frat house, tired of the perpetual, lingerie-clad pillow fight at her sorority house and decided to defile your bed on top of a couple of soiled togas–WITH BOTH FEET OFF THE GROUND!!! (That was one of the awesomest sentences I’ve ever written)

And then I went and fell in love with one of these dirty sorority girls…. Not only was she IN a sorority in college, but she loved it so much that after college was over, she actually worked FOR her sorority. I found out that there is this thing called National Panhellenic Conference that is kind of an umbrella organization that the “legit” sororities belong to. The NPC is there to make sure everyone behave themselves and represents their affiliations well. Still, I would watch her cringe at news stories about some freshman kid who died after being forced to eat each ping pong ball that he missed while playing beer pong during pledge week, or some girl ends up in the hospital because she had to do a shot every time someone slapped someone else on Jersey Shore. Even if they weren’t part of the Panhellenic thing that she was part of, it would still make her so mad and disappointed, because she had come to love her sorority. For her, sorority life was not about debauchery and hazing, it was about friendship and philanthropy and fun. So when people don’t represent fraternities and sororities well, and they act like a bunch of stupid jackasses, it sucks because it reflects on everyone.

This is the way I feel when I see Christians talking about the Constitution like it was the 67th book of the Bible. This is how I feel when Christians cheer for someone to be killed (no matter how “bad” that person is). This is how I feel when I see someone post a hateful facebook status about Muslims. Or homosexuals. Or about people who genuinely believe that there is an inherent injustice pulsing through the form that capitalism has taken in this country, and an evil that is inseparable from the consumerism that drives this nation. Every time someone claiming to be a Christian says something racist, every time a Christian comes across as holier-than-thou, every time someone prays in a way that makes sure everybody sees him, and then leaves a crappy tip, this is how I feel.

In the book, UnChristian (Here is their Youtube Channel), authors David Kinnaman and Gabe Lyons write, “We [Christians] have become more famous for what we oppose, rather than who we are for.” The Barna Group, which does research on faith issues, found that when younger people think of Christians, they think of the following six things:

This is heartbreaking…. Every time I or any other person claiming to represent Jesus Christ does something to reinforce these negative stereotypes, it hurts me. It hurts so many people. And it hurts the reputation of Jesus. There are SO MANY PEOPLE whose lives have been changed by who Jesus is and what he said, but THAT Jesus doesn’t seem to line up with what the church looks like in America–People like me, who are tired of Jesus getting a black eye just because the people who claim to follow him are going around starting fights. 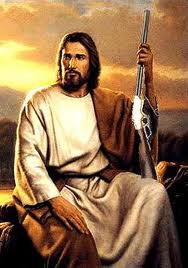 When this is the Jesus we're selling, no wonder the world is not buying it.

Don’t get me wrong–I’ve started my fair share of fights…. But most of the arguments I started were because I saw people doing and saying things that reinforced the stereotypes that are listed above. I don’t want any part of those stereotypes. It probably sounds grandiose, but I kind of think of this blog as a ministry. It’s me saying to anyone who will listen: I’m a Christian and I believe in science. I believe the Bible is inspired by God, but I don’t believe that means we have to draw retro grade circles to explain the things that contradict the other things–Inspired does not necessarily mean every word is factually true. Also, I do not think this country is somehow more special to God than any other country. I am not a republican. I am not a democrat (though, given the choice, I’m going to vote for the one that I believe offers the most help to the powerless and an evening of the playing field between rich and poor). I love to make people laugh, and I believe that laughter is an arrow that points us toward the existence of something bigger than ourselves–namely, God. And I believe that  we are made in the image of God, and God is a creator, and this blog is a way for me to practice being creative. 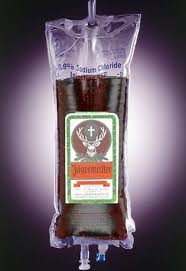 Jägermeister is German for "Bad decisions."

One of the main reasons I started writing a blog was because I was causing so much trouble on Facebook–It’s just not the venue for some of the stuff I like to talk about. It’s better suited for posting silly things your kids say, letting people know that you’re working out, and showing people pictures of things you’re about to eat. Turns out it is also pretty good for letting people know you’ve written a new blog–Right now, Facebook is pretty much the only way people find out my blog. So forgive me if you are one of my Facebook friends and you are annoyed when I share this on my wall three times. Part of what I’m trying to do here is to get the word out that just because a bunch of jokers are paddling the freshmen’s asses and shotgunning bottles of Jager, it doesn’t mean that is what ALL fraternities are about.

Also, it would be pretty awesome to get a book deal, so if you can share these blogs as well, that would be super cool….

This entry was posted in 4) All Of The Above and tagged Boer-Bennink, Fraternities, Jägermeister, Jesus, Politics, Sororities, Tappa Kegga Brew, The Barna Group, UnChristian. Bookmark the permalink.

15 Responses to Sorority Pillow Fights, and Why I Blog