Jesus Voting Republican Would Be A Miracle

I swear I’m not a democrat. Sure, I still have an “I ♥ Barack” bumper sticker on my car from the 2008 election, but the heart has completely worn off, so now it just says “I   Barack.” I tell people it’s quoting the first two words of President Obama being sworn in…. I don’t put any faith in the democratic party to fix what is wrong with this country. I really don’t. My Hope for Change has nothing to do with Barack Obama. Don’t get me wrong–I like the guy. I like listening to him talk. I think he is smart, he is genuinely trying to do the right thing, and he has integrity. But electing more democrats to office than republicans is not the solution to the problems this country or this world is facing…. For me (and probably for a lot of other people) voting for a democrat is only the right choice when considering the alternative–I am only a democrat insofar as I am SO NOT a republican.

Images of Jesus always portray him with such a nicely manicured beard. This is one of my favorites, though not as much since I realized it resembles The King in the Burger King commercials…. I suppose that’s appropriate.

Our foundational beliefs shape our political decisions, and what I believe about Jesus profoundly shapes my own politics. If we’re taking sides between the rich and the poor, I’m siding with the poor. And it’s not just because I am poor–Relatively speaking, of course. In this country, I’m on the poor end of the spectrum, but compared to most of the world I live like a king–but also because I believe Jesus calls us to be on the side of the poor. It seems to me that the republican party is far more concerned with the rights of the rich to keep as much of their money as possible than they are with the rights of poor who are being exploited in order to build the fortunes of the rich. One party is the party of “I” and the other (more so, at least) is the party of “WE.” I know it’s not as simple as “Rich vs. Poor” or “I vs. We,” but there truly has been a shift in the republican party recently that is so foundationally contradictory to the gospel of Jesus Christ that it leaves me bewildered and discouraged as to why the church can’t see it. One of the symptoms of this contradiction is the worship and discipleship of conservatives and republicans around the teachings of Ayn Rand. 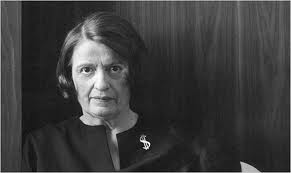 I’d say most people probably don’t know that much about Ayn Rand. If you don’t know anything about her, you should do a little research, as she is an interesting figure in philosophical/economic/political thought. She basically came up with a philosophical system called “Objectivism” that championed “The Virtue of Selfishness,” and believed that man’s pursuit of his own “rational self-interest and of his own happiness is the highest moral purpose of his life.”  She is one of the heroes of capitalist theory, and therefore one of the heroes of many of today’s conservative politicians–People like Ron Paul and his son Senator Rand Paul, Alan Greenspan, Clarence Thomas, and Mitt Romney’s new vice presidential running mate Paul Ryan. By the way, “Mitt Romney and Paul Ryan” anagrams to “My ultimate Ayn Rand porn.” Coincidence? I think not.

This attack ad questions the giant crush republicans have on Ayn Rand:

Here are some things that Paul Ryan, who credits Ayn Rand’s writings with getting him into public service, has said about her:

Then, in March of 2012, Catholics United criticized Paul Ryan (a Catholic) about the idealogical erection (my terminology, not theirs) he has for Rand (an Atheist) with this this statement:

“We question why Ryan, a self-professed Catholic, would put the teachings of ultra-capitalist Ayn Rand (of whom he has spoken glowingly) before the teachings of Jesus and the Catholic Church…. Rand, whose doctrine states self-sacrifice for one’s friends—a core tenet of Christianity—is akin to slavery, teaches the value of the self over all others. In her worldview, self-interest and greed take the place of a higher power.”

Say what you want about his policies…. If his budget plan is half as good as his workout plan, count me in!

Since this press release, and even more since the announcement that he is Romney’s running mate, Paul Ryan has backtracked on his “Randiness,” if you will. He is now saying that his characterization as a Randian/Objectivist thinker is an “urban legend.” Now he is saying things like “I reject her philosophy. It is an atheist philosophy.” This from a man who said that the three books he reads the most are The Bible (well duh–he’s a politician), Friedrich von Hayek’s The Road to Serfdom , and Ayn Rand’s Atlas Shrugged. This sudden change of heart seems at its best insincere, and at its worst horse shit.

This just about sums it up…. And there is that beard again! Jesus’ looks nice too. By the way, Ayn Rand ended up taking Social Security under her husband’s name when her personal desire to smoke two packs a day gave her lung cancer.

Really though, it makes sense for him to distance himself from Ayn Rand, and here’s why: You can follow the teachings of Ayn Rand, or you can follow the teachings of Jesus, but you can’t follow both. The selfishness of Ayn Rand’s philosophy was way too in your face–republicans leaders need their worship of the rich to be more nuanced. This is a woman who referred to all the poor as “moochers” and worshiped the dollar above all else–She was rarely seen without her trademark dollar symbol broach, and even arranged for a floral dollar symbol at her funeral. In her diaries, she even went so far as to idolize a mass murderer named William Hickman, whom she called “a superman” for his ability to not care about anything but his own desires. Yet this is the philosophical and moral foundation for the Social Darwinism that much of the republican party is running on. How strange that a party who rejects any theories of evolution would embrace such a hardcore, “survival of the fittest” economic theory…. How incongruent that the party of the “Christian right” could find it possible to have a functioning moral compass with the two poler opposites of Jesus and Ayn Rand….

I’d rather vote for this Mitt.

And that is the reason I can’t let myself vote republican at this time in our nation’s history–Not because I am a “democrat” (whatever that means), or because I want more taxes or bigger government or a welfare state. I don’t. I, like most people, want a government that is effective and doesn’t spend more than it takes in. I think that people like Mitt Romney with stupid amounts of money shouldn’t pay a lower percentage in taxes than the people who work for them. And I think that most people want to work, and having a system that rewards hard work seems to function pretty well. But I believe that part of having a society (and a government) is looking out for each other’s needs–especially the needs of the poor and the powerless. I would rather we cut military spending before we cut social programs. I believe that the “WE” is at least as (if not more) important than the “I.” Do I think Obama winning this election is going to bring us closer to this ideal? Maybe…. Probably not, but at least it’s not moving us in the whole other direction. It’s not the fact that I am a democrat that keeps me from voting republican…. It’s the fact that I’m a Christian.

“The disposition to admire, and almost to worship, the rich and the powerful, and to despise, or, at least, to neglect persons of poor and mean condition is the great and most universal cause of the corruption of our moral sentiments.” ~ Adam Smith, Scottish political economist

“Blessed are you who are poor, for yours is the kingdom of God.” ~ Jesus

25 Responses to Jesus Voting Republican Would Be A Miracle