Comparing Clinton and Trump Is Like Comparing Apples and Hitler

Listen–I am not a huge Hillary Clinton fan… Not by any stretch of the imagination. I’m one of those annoying people who believes that Bernie Sanders is a “once in a lifetime” leader who has actually placed himself in a position of political opportunity… All while somehow managing to remain a person of integrity, compassion, vision, and hope. But it is increasingly likely that the next president of the United States of America will be either Hillary Clinton or Donald Trump. It is not decided yet… But this system of super delegates is the system we have, and you can’t change the rules halfway through the game. I’m not saying I’m giving up. I still have hope that people will continue to give Bernie Sanders wins in state primaries, that super delegates will change their allegiance to the person I believe is the better candidate, and somehow Sanders can come out of this as the democratic candidate for president. But with the system the DNC has right now, Clinton can lose (and HAS LOST) the popular vote in a state’s primary, and STILL come away with more delegates. And though it’s not yet over–if I’m being a realist–it is becoming increasingly likely that the two major party candidates for president will be Donald Trump and Hillary Clinton.

And as more and more people come to this same realization, people have been expressing dismay at being put in the difficult situation of having to choose between, as South Park put it in 2004, a Giant Douche and a Turd Sandwich.

Personally, I think the choice is clear. Giant Douche all the way!

This trapped sensation of “Damned if you do, damned if you don’t” that people have been feeling has given rise to a whole bunch of memes that make it seem as if these two candidates are equally repellant. I’ve picked out a few I’ve seen floating around Facebook over the last week or so (since Ted Cruz dropped out of the race. Here’s a small sampling:

Yeah, yeah… We get it–Either way, the kids going to get electrocuted. But here’s my question: Who’s the jackass taking the picture? My guess is that the picture-taker represents the American Public…

That’s not fair… I can think of a lot more cons than that.

Yup. I don’t like this one either. Really nothing funny to say here…

And this is where the title to this post comes in… Comparing Hillary Clinton to Donald Trump is like comparing apples and Hitler. And yeah, I know that Hitler was a really bad dude, and a lot of people consider hyperbole like this to be not only unhelpful, but downright offensive. But I haven’t seen anything close to humanity or compassion come from Donald Trump, and I honestly fear what could result from putting a person like that in a position of actual power. We would have never heard of Hitler’s name if he hadn’t been put in a position of power. And this is my blog, so I can say what I want… For now. Because Trump has alluded to wanting to “open up libel laws” so that he can sue media outlets who publish stories he deems to be “unfair.” And the cool thing about being a billionaire is that you can afford to sue a whole lot of people and organizations who can’t afford to defend themselves… Which is a big part of why we have the well-established libel laws that we do. But I digress. Ugh. 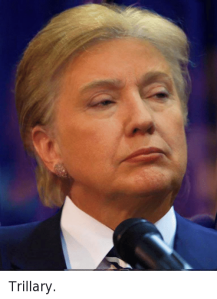 This is as disturbing to me as it is to you.

Ironically, my willingness to vote for Hillary Clinton–even though I believe she is the lesser candidate to Bernie Sanders–is one of the things which I have most in common with her as a candidate. It seems to me as though Hillary Clinton is willing to do whatever it takes–even if it means sacrificing some of her ideals, or “playing ball” with big money and big business–to get some small steps toward “better.” Hell, even small steps toward “worse” are better than giant leaps toward worse. The only people who want Trump to be president–while truly understanding what kind of man he is–are either the white supremacists or the ones who want to burn the whole thing to the ground. We need to change the system, but right now we must work within the system we currently have. I hoped that Bernie Sanders was going to be the catalyst for that kind of change… I still hope. But if it’s not going to be him, we can’t just burn the whole thing to the ground. There are too many lives at stake.

There are liberals and progressives who are so disappointed with a Clinton candidacy that they would just say, “Screw it, I’m not voting for Hillary”–even at the risk of a Trump win–but they are only able to do that out of a position of privilege. If you are a young black man getting thrown out of a Trump rally for no other reason than the color of your skin, you can’t afford the possibility of a Trump presidency. If you’re an immigrant, if you’re a Muslim, if you’re woman who is concerned about making decisions about your own reproductive rights without worrying about being put in jail… YOU CAN’T AFFORD THE POSSIBILITY OF A TRUMP CANDIDACY! Watch this video of two new commercials about Donald Trump–The first part is simply Trump’s own words, the second part the words of the other presidential candidates…

Nobody wants to be put in a situation where you have to vote between getting kicked in the nuts or getting stabbed in the neck… And right now, it feels like a lot of people are like, “Well, both of those things are unpleasant, and I don’t like unpleasant things, so screw it–I’m choosing getting stabbed in the neck.” But here’s the thing: IT’S NOT YOUR NECK! It’s someone else’s neck. It’s an immigrant’s neck. Or a Mexican’s neck. Or the necks of a terrorist’s family. Or a single mom’s neck. Or the neck of a little Muslim kid at my kid’s school. This hard decision is made easier when they are talking about YOUR nuts and YOUR neck. When it’s YOUR neck on the line, all of a sudden a kick to the nuts doesn’t seem quite so bad.

So yeah, I get it… You might be a person like me who feels like a vote for Hillary is a bit of a kick to the nuts. And I don’t want to make it seem like there are no good things about Hillary Clinton as a candidate. There are. There are plenty of good reasons to vote for her. But Trump is a total knife to the neck of this nation, and there are a lot of people who would not survive it. I guarantee you that if it was one of your kids who was being faced with a kick to the nuts or a knife to the neck, you would have a big sign in your yard that says “NUTS 2016!”

But seriously, as disappointing as Hillary Clinton is to me, she is heads and tails above Trump as a presidential candidate. It’s not even close. A sick cat could cough up a more qualified presidential candidate than Donald Trump. Which brings me to my fantastic idea for a Hillary 2016 Bumper Sticker: “Vote Hillary. Because a kick to the nuts is better than a knife to the neck.”

Just so you know, I get no money for people “clicking” on this page. The only support I get comes from the people who value what I do here enough to BECOME A PATRON. For the cost of a cup of coffee, you could buy my wife a cup of coffee. No, seriously, I am going to be able to attend Wild Goose Festival this summer because of the support of my patrons. I think that’s pretty amazing… Patron’s like Bette Cooper, who will be getting some cool prizes. Also, if you have a post that you would like to “boost” on Facebook (which is the main way most people find stuff I’ve written), when you LEAVE A TIP ON PAYPAL, you can designate a post to boost so even more people will see it. I love you guys. Oh yeah. Also, I’m 5 Twitter Followers away from 1000. Let’s make that happen…