Letting Go Of The R-Word

Posted on December 4, 2012 by theboeskool 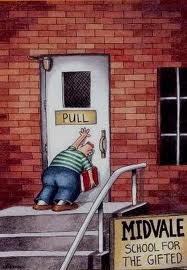 There are many different types of intelligence….

When I was in Junior High (“Junior High” for us meant 7th, 8th, and 9th grades), there was a strange man who would hang out near our school. He would stand on the sidewalk with a pad of paper, and he would yell things at the cars that drove by, followed by what seemed to be copious note-taking about each car. His name was Junior (no relation to the school), but when we talked to him, in the strange language he spoke, his name came out as “Pooner.” And we really only knew that because in the flurry of babble that came out of his mouth, he motioned to himself as he said “Pooner.” He was a giant man, with a body like a Far Side character, but there was absolutely nothing threatening about him…. He was kind smiles and gibberish.

I’m sure someone meant well with this, but…. Wow. I mean, really…. Wow.

My Junior High self was not completely unlike my current self, in that I thought I was funnier than I actually was back then too. I thought I was particularly funny when I wrote out a list of symptoms to disease I made up called “Pooneritus.” And I wasn’t the only one that found it funny–When my classmates read my list of odd characteristics and strange habits done by our harmless Junior, they laughed too. However, when our Bible teacher found the list, he did NOT find it nearly as funny. His spiritual gift was making adolescents who thought they were being funny suddenly realize that they, buried beneath the full weight of Christian guilt, were actually being the worst sort of cruel. He didn’t use his gift frivolously either–He only made us feel like crap when we actually deserved to feel like crap. And right then, we knew we deserved it.

Back then (and on into high school and college), many of the things that I really didn’t care for were called “retarded” (That or “gay,” but that’s for another post). Most of the times I used that word, I didn’t actually think of a person with an intellectual disability…. I was just thinking “this is stupid” or “I hate this,” and “retarded” was the word that came out of my mouth. There were times when I used it in a more insidious way as well–Like if someone was acting too silly or crazy, I might say, “Don’t be such a retard,” but most of the time it seemed like an innocuous enough synonym for something stupid or something that I hated. And I didn’t give it a second thought.

As is often the case, we don’t realize the ways that our words and our prejudices can hurt people until we actually spend some time with the people we are hurting…. 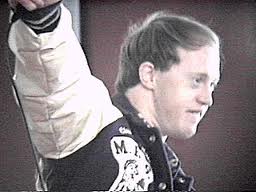 I assumed that working with people with special needs would be much like an episode of “Life Goes On.” I assumed wrong.

Fast forward to the summer after my freshman year in college where I found myself working at a camp for people with special needs. I was completely out of my element–Suddenly, the ease with which witty responses came to me was a much less valuable thing, and using a word like “retarded” to describe something I thought was stupid became much more risky. If I used that word without thinking, I might find myself apologizing to a mother who has dedicated her whole life to loving and caring for her disabled son. Or even worse, if I carelessly used that word, I might hurt the feelings of my camper–A kid named Jerry who had Down Syndrome (I say “kid,” but was was actually older than me) who was a smiling, playful picture of love–And the best kind of love…. A love that is simple.

I’m not sure what this has to do with anything.

I should mention that I’m not writing this out of a place of trying to be politically correct. A lot of times, political correctness just comes out of a fear of seeming “out of style” by using outdated terminology. As terms get older, they come off as more offensive. And so, when referring to someone with brown skin, “Colored” becomes “Negro” becomes “Black” becomes “African American” becomes “Person of African Descent.” Using outdated terms doesn’t necessarily say anything about a person’s heart–Just because a grandma somewhere refers to someone with brown skin as “colored” doesn’t make her racist…. Grandma might just be wearing last season’s shoes (though, if grandma is informed that using “colored” is offensive and she still insists on using that term despite the fact that it offends people, she might want to ask herself why she refuses to change). But if she is using the term “Colored” to mean “something that she hates,” Grandma needs to have a little talk with my Junior High Bible teacher, because she should be ashamed of herself. 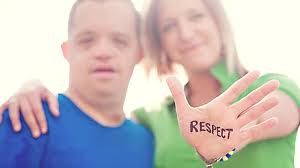 This picture is from r-word.org. You can go there and join a bunch of other people who have pledged to stop using this demeaning word.

Well, the same thing is true for using the word “retarded.” Thirty years ago, that might have been a perfectly acceptable way to refer to a person with an intellectual disability…. so if you have been on a desert island for a couple decades and you call a person the R-word, you’re forgiven. Please don’t use that word anymore–It’s the disability equivalent of using the word “Nigger,” and it’s completely offensive. Stop saying it. And if you are one of the seemingly endless numbers of people who uses the R-word as a synonym for something stupid or something you hate (i.e. “This blog is retarded.”), you need to stop doing that. I know it’s not your intention to be mean or prejudiced when you say it, but it really doesn’t matter what your reasoning is–You’re using a community’s most hurtful word (a word used to demean a human beings whom God finds every bit as valuable as you) in place of calling something stupid. You’re acting like it’s no big deal, but it is a big deal…. And I don’t mean to go all “Junior High Bible Teacher” on you, but it is not okay.

During one of the presidential debates, Ann Coulter (if you don’t know who she is, be thankful) called president Obama a retard on her Twitter account. Twice. In response to her words, John Franklin Stephens, a 30 year-old Special Olympian with Down Syndrome, wrote THIS LETTER to her. Please, please read it. It is short and sweet and it is genuinely one of the most wonderfully kind and smart things I’ve ever read. It might have taken him a little longer than some to get his thoughts together, but here is an excerpt:

“I thought first of asking whether you meant to describe the President as someone who was bullied as a child by people like you, but rose above it to find a way to succeed in life as many of my fellow Special Olympians have. Then I wondered if you meant to describe him as someone who has to struggle to be thoughtful about everything he says, as everyone else races from one snarkey sound bite to the next. Finally, I wondered if you meant to degrade him as someone who is likely to receive bad health care, live in low grade housing with very little income and still manages to see life as a wonderful gift. Because, Ms. Coulter, that is who we are – and much, much more.” He signed the letter with the words “A friend you haven’t made yet.”

Please read the whole letter. And please. Don’t be like Ann Coulter.

I’ll leave you with this story: The other day, I was doing a puppet show at a school (yes, one of the hats I wear is that of a puppeteer) in a school with quite a few developmentally delayed children integrated into the general population. There was a kid with some sort of intellectual or emotional disability who was watching our presentation…. Well, I wouldn’t say “watching.” He was basically wrestling with the woman who was sitting with him and holding him in this patient, loving bear hug. Every once in a while he would yell something, and we were in a gymnasium, so it was kind of echoy and distracting to have this kid keep trying to make a break for it and yelling out. The rest of the kids in his class didn’t seem to mind, but I was getting a little frustrated. I kept thinking, “Why don’t they just take him somewhere else? He’s not getting anything out of it, he keeps yelling, the lady he’s wrestling with has got to be getting tired…. What is this kid doing in here?” 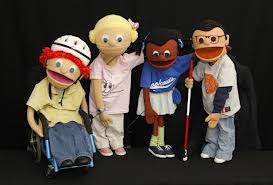 Renaldo is the one with the cane…. Just in case you were wondering, he really likes playing Beep Baseball.

A few minutes later, during the portion of the presentation when the kids ask the puppets questions, a second grade girl who had Down Syndrome raised her hand to ask my puppet a question–A puppet named Renaldo who is blind and teaches kids about accepting differences. The girl was a little smaller than most of the other kids in her grade, and she had a tiny little voice. She asked her question, but we couldn’t hear what she said. The girl sitting next to her (who looked to be her helper) put her arm on the littler girl’s back and leaned in as she whispered her question again…. “She wants to know if you like to play games.” And I saw clearly that kids with intellectual differences are not integrated simply for what that can get out of it–It’s just as much about what they can give. They give other kids an opportunity to get to know people who are different before all of our crappy prejudices develop.

So next time you say the R-Word, please think about what you’re saying. Imagine using that word while sitting next to that little girl who asked a puppet a question. Imagine using it while talking to that little girl’s mother or father. Imagine that little girl’s friend hearing you use that word to describe something stupid, and then imagine hearing her use it for the first time herself. Let it be a word that you just let go of. There is no reason to hang onto it. As you try to stop, it will probably slip out more than a few times–it definitely did as I was letting it go–but after a while, it will leave your vocabulary. And then when you hear other people saying the R-Word, it will sound as crass and ignorant and hurtful to your ears as it now does to mine. And then you can forgive those people for saying it, explain why you don’t say it any more, and maybe it will just disappear…. And we’ll all be better for it.

This entry was posted in 5) Not Quite Sure and tagged Ann Coulter, Corky Thatcher, John Franklin Stephens, Kids on the Block, Letting Go, Political Correctness, Renaldo, Retarded, Special Olympics, The Far Side, The R-Word, Tracy Morgan. Bookmark the permalink.

63 Responses to Letting Go Of The R-Word