A Tale of Two Letters

I, for one, am really proud of this guy. It takes courage to admit you were wrong. We can learn a lot from this man.

I’ve got another post I’ve been working on, but this is just too important to me right now. Today many people have been talking about how Senator Rob Portman, one of the Co-Sponsors of the Defense of Marriage Act (that codifies discrimination and writes into law that the Federal Government does not recognize same-sex marriages), has changed his stance on same sex marriage. This happened because Sen. Portman’s son, Will, was brave enough to come out to him two years ago. People are reacting to Senator Portman’s change of heart in a range of ways. If you are anti-marriage equality, you are probably not too excited, but it’s the reaction of people who are for equal rights for LGBT people that has been really interesting to see: Everything from happiness at the arrival of a new ally, to a big middle finger at the fact that he worked so hard to discriminate–right up until it directly affected him, and then he decides it’s not okay anymore. And everything in between….

That seems to be the way things work sometimes: We keep discriminating against a group that we view as “other” until we actually get to know someone from that “other” group. An even more powerful way to change a person’s heart is to have that “other” be one of your kids. Sometimes people are so set in their ways, and their hearts so hardened, that even when the person coming out is their own child, it doesn’t make any difference. Here is a letter from a father to his son who just came out to him:

LGBT youth are four times more likely to commit suicide, but among LGBT youth who are highly rejected by their families, that number jumps to EIGHT TIMES the average.

If it’s difficult to read, here is what it says:

James: This is a difficult but necessary letter to write. I hope your telephone call was not to receive my blessing for the degrading of your lifestyle. I have fond memories of out times together, but that is all in the past. Don’t expect any further conversations with me. No Communications at all. I will not come to visit, nor do I want you in my house. You’ve made your choice, though wrong it may be. God did not intend for this unnatural lifestyle. If you choose to not attend my funeral, my friends and family will understand. Have a good birthday and good life. No present exchanges will be accepted.
Goodbye, Dad

Now, please read another letter that has been making the rounds today–This one, again, from a father to a son who is coming out, but with a very different tone: 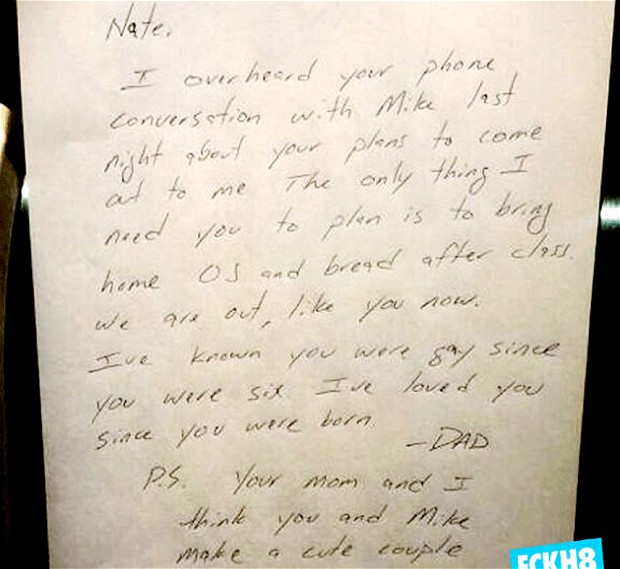 So beautiful it made me cry.

Again, if it’s hard to read (if you’re on your phone or something) here is what it says:

Nate, I overheard your phone conversation with Mike last night about your plans to come out to me. The only thin you need to plan is to bring home O.J. and bread after class. We are out, like you now. I’ve known you were gay since you were six. I’ve loved you since you were born. -DAD
p.s. Your mom and I think you and Mike make a cute couple.

I want you to read these two letters, and then think about those cheesy WWJD bracelets that everyone used to wear. Consider these two polar opposite reactions from a father to a son, and then ask yourself “What would Jesus do?” Given everything you know about Jesus, which of these two reaction are closer to his heart? Jesus talks about a God who loves us so much that he runs to meet us even after we squandered all of his blessings and given him the finger. Please, read these letters and let your heart be changed! Don’t be the sort of person who doesn’t get how someone else feels until it directly affects you or your family. “Injustice anywhere is a threat to justice everywhere.” “BELOVED, LET US LOVE ONE ANOTHER!!!”

16 Responses to A Tale of Two Letters