Shouting [About Gun] Fire in a Crowded Theater

Some time last night, while most of us were asleep, someone in a Denver suburb named Aurora threw a teargas canister into a movie theater full of people watching a midnight showing of The Dark Knight Rises and started shooting people. I woke up in the middle of the night (after a little more than three hours of sleep) and I have no idea why I am up right now–There is really no reason for me to be awake, but I woke up feeling some sort of Obi Wan Kenobi-esque disturbance in the force (it might have just been gas–I ate a ridiculous amount of pretzels last night), saw the breaking news story on Yahoo News about the shooting, and now I can’t sleep. And I feel compelled to write something….

I am so sad and so angry and frustrated all at the same time. Sad for all of the families who are hearing, in the middle of the night, that someone they love has been senselessly killed. I’m angry that there are so many people out there who look at these deaths as some sort of necessary inconvenience that we have to put up with every once in a while in order to keep our right to have any sort of gun we might want to have. And frustrated that we, as a country, can’t come together and rationally work out how to make this crap stop. Any sort of call for tighter gun control in the wake of a shooting like this will most likely be met with accusations of trying to politicize a tragedy. Well, I don’t care. Enough already. At what point does one person’s right to keep and bear arms infringe on another person’s right to life, liberty, and the pursuit of happiness? 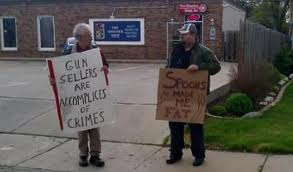 Sure…. But you’re not taking your spoon into a theater and force-feeding all kinds of other people. Until they are dead.

For the last couple of days, people have been circulating a picture on Facebook of a man holding a sign that says “Gun sellers are accomplices of crimes” standing next to another man holding a sign that says “Spoons made me fat.” It’s a fun new twist on the old adage “Guns don’t kill people. People kill people.” Except, when you wake up in the morning and read about 14 people (so far) being killed and 50 being injured while watching the new Batman movie, it makes it a little less fun. Yes–We all know that if someone wants to kill someone else, they could use a baseball bat or a knife…. But, you know what? THINGS LIKE THIS DON’T HAPPEN WITH BASEBALL BATS!!!! They happen with guns. They happen with assault rifles and handguns with giant clips for killing multiple people. Nobody has ever walked into a theater and killed 14 people and injured 50 others with a baseball bat. 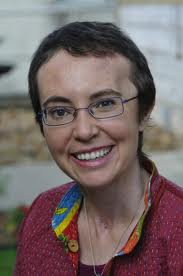 Another broken egg in our freedom omelet….

I realize that we are so divided as a nation about so many different things–People hear about something like this happening and half the country calls for less guns while the other half thinks the solution is more guns–but there has to be something we can move toward that feels like common sense without feeling like the government is plotting to disarm its citizenry. Every so often, we hear yet another story of someone with a gun deciding to kill a bunch of people. A man walks up and shoots 19 people while Gabby Giffords is giving a speech, and a short time later we all forget about it…. All of us other than the families of the ones who were shot, that is. This shit has got to stop. How many tragedies, how many shooting sprees, how many destroyed lives and families must we endure before we can come together and talk about this with a measure of sanity. Is it possible that our collective freedom is enhanced when we limit other’s freedom to possess highly effective killing machines?

Behold, the face of freedom…. Until the a meth lab blows up or a junkie robs you. Don’t worry, though–If that happens, you can defend yourself with your gun.

We, as a society, limit people’s freedom all the time. We limit a person’s freedom to cook meth in their house–even if they are only going to use it for themselves. We have the right to free speech, but that right ends when it infringes on other people’s safety. We DO NOT have the right to shout “FIRE” in a crowded movie theater, nor do we have the right to call in a fake bomb threat…. I cannot, for the life of me, figure out why we feel like it is beneficial for a society to protect the right of its citizens to possess automatic weapons designed to kill many people in a very short time. If they are used for what they are designed for, it will almost always be a crime. Sure, they are fun to shoot at the range…. but are we willing to put up with this increasingly frequent brand of mass murder just because some jack asses enjoy shooting machine guns at the range?!?! This is lunacy.

This entry was posted in 2) Politics, 5) Not Quite Sure and tagged Aurora Theater Shooting, Colorado Shooting, Gabby Giffords, Gun Control, Spoons Make Me Fat, The Dark Knight Rises. Bookmark the permalink.

26 Responses to Shouting [About Gun] Fire in a Crowded Theater