“Hello, World Vision? I’d like to give, but is it possible for me to insure that none of my financial support goes toward feeding GAY kids?”

In a surprise move, World Vision has made yet another change to its hiring practices. As many of you know, World Vision shocked the evangelical community when three days ago they announced they would begin hiring openly gay Christians, while holding them to the same standards they held their straight employees: Stay celibate if you’re single; stay faithful if you’re married. This from an organization that, as recently as a few years ago, successfully defended their right (to the Supreme Court, who let a lower court ruling stand) to NOT hire and/or fire people based on a person’s slightly differing interpretation of Christianity…. They made the decision to hire gay Christians based on the fact that their organization is about helping vulnerable people, and they decided to leave the decision about the “rightness” or “wrongness” of same-sex unions and marriages up to the individual Church denominations and congregations. President of World Vision Richard Stearns explained it this way: “We are an operational arm of the global church, we’re not a theological arm of the church.” Makes sense to me…. 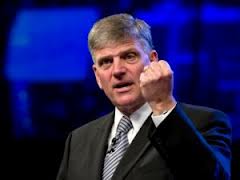 Franklin Graham, demonstrating the knuckle sandwich he’d like to give all those gays. And those Muslims, while we’re at it….

Though many were encouraged by this apparent step toward equal rights and acceptance of LGBT people (who also happened to love Jesus and want to help feed hungry kids), the announcement did not come as good news to many within the evangelical community. Noted homophobe and Vladimir Putin fan Franklin Graham called the decision “ungodly,” while some guy named Russell Moore called it “devilish.” Thousands of people called World Vision and cut their funding to their child sponsorship as a response to World Vision’s idea that maybe gay people who love Jesus and want to help the poor might be good workers too. Because of the threat of losing a large portion of their funding, two days ago World Vision’s board reversed the decision to hire gay Christians. They said that their reversal was based on “Biblical principles.”

Now, in an attempt to more rightly align the organization’s business practices with Biblical principles, World Vision has made some more surprising changes in employment policy. Here are a few of those changes:

Call it a “Conscious Uncoupling” if you want…. you’d better not apply at World Vision!

1) NO MORE DIVORCED PEOPLE
The Bible is very clear about how much God hates divorce. Jesus himself had some pretty stern words about divorce (though he never recorded as saying ANYTHING about homosexuality), and said, “Whoever divorces his wife and marries another woman commits adultery against her; and if she herself divorces her husband and marries another man, she is committing adultery.” (Mark 10:12) Adultery! Yikes…. That’s one of the Ten Big Ones! So from now on, if a woman divorces her husband (who happens to be beating the crap out of her and her kids), she better not hope to start a new life working for World Vision. Because they’re not hiring.

If Mother Teresa can keep her head covered, so can you.

2)WOMEN WILL COVER THEIR HEADS WHILE ON THE JOB
In 1 Thessalonians 5:17, Paul says to “pray continually,” and in 1 Corinthians 11, Paul is very clear that it is improper for a woman to pray with her head uncovered, and that doing so “dishonors her head.” The flip side of this change in World Vision’s policy is that men will no longer be allowed to wear hats while they are out there trying to get food to hungry kids. They will also be enforcing Paul’s mandate to the Church at Corinth that men have to keep their hair short, and a women’s hair must remain uncut. Paul writes, “Does not the very nature of things teach you that if a man has long hair, it is a disgrace to him, but that if a woman has long hair, it is her glory? For long hair is given to her as a covering” (1 Corinthians 11:14-15). Men will, however, be allowed to cut their sideburns–Adhering to that rule would just be crazy. So no more pixie cuts if you plan on working for World Vision, unless you’re a man, that is. On second thought, not if you’re a man either. It sounds a little too…. Gay.

3) NO MORE FAT PEOPLE
Effective immediately, all World Vision employees who are more than 20 pounds over their ideal body weight are fired. When you’re operating an organization that is running on Biblical principles, you can’t forget that the Bible is definitely against the clear sin of gluttony. “Our bodies are our temples,” “I will not be enslaved by anything,” etc. etc…. Any way you look at it, scripture is clear about gluttony, and there is no longer any room for you at World Vision…. Literally. Feel free to reapply after you lose some weight, fatty.

4) NO MORE WOMEN IN CHARGE
In Paul’s first letter to Timothy, he says, “I do not permit a woman to teach or to assume authority over a man; she must be quiet” (1 Timothy 2:12). World Vision has apologized to the Evangelical community for ignoring this clear Biblical principle in its organizational practices, and they have decided to give demotions to female employees until they are no longer in a position of authority over another man. This will certainly come as major disappointment to the female members of the World Vision leadership team, but, on the bright side, it will give them a lot more time to devote to running a brush through their ass-length hair.

“Hi, my name’s Dr. Phillips. So you’re thinking about getting married? Well, let’s just take a quick peek down there to find out whether or not you’ll be getting stoned to death…. And I don’t mean the fun way.”

5) ENFORCING OLD TESTAMENT LAWS ABOUT VIRGINITY
If you find out that the woman you are marrying is not, in fact, a virgin (or even if it looks like she’s not a virgin), you are allowed to stone her to death. Now, I know that here in the USA that kind of thing will get you thrown in prison, but fortunately World Vision goes into a whole lot of underdeveloped countries where this kind of thing stays under the radar. The Bible is clear, and this stuff is about Biblical principles. World Vision has also started enforcing the policy of cutting off a woman’s hand is she grabs a mans testicles (“If two Israelite men get into a fight and the wife of one tries to rescue her husband by grabbing the testicles of the other man, you must cut off her hand. Show her no pity.” ~Deuteronomy 25:11-12), as well as enforcing the policy of stoning a woman who gets raped inside the city because she should have yelled louder (“If a man meets a young virgin lady engaged to be married in the city and has sexual relations with her, then the two must be brought to the city gate and there they must be stoned to death—the girl because she was in a city but did not cry out for help, and the man who abused a woman who was engaged to another man.” ~Deuteronomy 22:23-24)

Don’t worry, though. Even though some of these new policies may seem a little extreme, it’s really all about feeding hungry kids and helping people who can’t help themselves….

***UPDATE***
I didn’t think I’d need to mention it, but these 5 new employment policies are obviously satire. Also, just for the record, I don’t blame World Vision for making the decision they made. It’s really easy to sit back and criticize an organization for compromising, but a huge number of their large funders threatened to part ways, as well as thousands of people who called and cancelled their sponsorships. This could have been devastating to their mission–A noble and good mission to help people worldwide who really need help. So yeah…. This isn’t meant to be critical of World Vision and its decisions. It’s meant to be critical of the antiquated, intellectually dishonest, “Law over Love” mentality much of the Church still has about homosexuality that forced World Vision to either change their policy of hiring gay Christians (which, by the way, has been the policy since October of last year) or risk endangering their mission. But yeah, these 5 policies are made up. Everything I read about this event was either really angry or really sad–and for good reason. It is tragic and dumb–so I wanted to add a little funny to the conversation. Let us all work toward the day when the Church is known for actually loving people with whom they disagree, instead of being know for pushing those people to the margins and restricting their civil rights.