This picture represents everything that is right with Fantasy Football.

I love football. I love this time of year. The days are getting shorter, it’s not a blazing hot all the time, and soon, it will be time for another disappointing season of Fantasy Football. I know, I know–I am a dork, but I love it. I look forward to it all summer long. Because of Fantasy Football, I know entirely too much about the goings on of the NFL. And though there is usually not a whole lot going on in the world of professional football that would make its way to me writing about it here, I wanted to draw your attention to a couple of recent stories from the NFL that I think are worth talking about. The first is worth criticizing, and the second is worth celebrating. Let’s start with the criticism…. 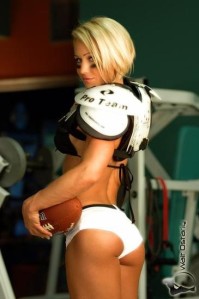 That’s not grease under her eyes… Those are just good ol’ fashioned black eyes. NBD.

The NFL just announced that Ray Rice (you probably know him as an alumnus of my FF team “Balls Deep,” but he also is a running back for the Baltimore Ravens) will serve a 2-game suspension for knocking out his then fiancee/now wife during an argument in a casino. They actually got married the very next day. Usually they say to give it a good week after an incident of domestic assault before getting married, but I guess they went against conventional wisdom. Since the announcement of the 2-game suspension, the NFL has received quite a bit of criticism over the severity of the punishment handed down to one its players for beating up a woman on video, and then dragging her unconscious body out of an elevator. It does seem like the equivalent of a slap on the wrist, especially when you consider some of the suspensions players have gotten for other offenses.

For example, last year my team was kept out of the playoffs, partly due to a huge performance by wide receiver Josh Gordon. He was a little bit of a sleeper pick last year. Some people didn’t draft Josh Gordon early, because he was also serving a 2-game suspension as well. His was for smoking marijuana though. I suppose I can see how that would be at the same level as knocking out your fiancee…. Of course, that’s the same suspension Michael Vick got for killing a bunch of dogs. I guess he’s lucky he didn’t accidentally shoot himself in the leg with a gun–That earned Plaxico Burress a 4-game suspension! Though, football players do need their legs to run… They don’t need conscious fiancees. I mean, Albert Haynesworth received a 5-game suspension for stomping on another player during a game, and Jonathan Vilma was suspended for a WHOLE YEAR (16 games) for targeting players with hits. The NFL doesn’t like their athletes getting hurt. Violence against women, however, doesn’t seem to be high on their list of priorities. Please watch this amazing video of Keith Olbermann preaching the truth:

I guess the punishment fits the crime? So, if you’re keeping track at home, violence against women is about 50% as severe as accidentally shooting yourself in the leg, 40% as severe as kicking another player, or 12.5% as severe as trying to hit players so hard it injures them…. Or roughly the equivalent of killing a dog or smoking pot. In the NFL’s defense, Ray Rice IS a good player [sarcasm font]. Still, I’m a little bit pissed off at Ray Rice right now. I’m definitely not drafting him on my team this year…. Unless he’s still available in like the third round…. Or the second round if we’re doing a PPR league this. But yeah…. PISSED…. Maybe late first round in a PPR, I don’t know.

In more hopeful NFL news, former player David Tyree has had an amazing change of heart. You might remember him for making what could very well be the most amazing catch in the history of the NFL, when he caught a pass from Eli Manning on the top of his helmet during the game-winning drive in the Super Bowl between the Giants and the Patriots. Or you might also know him as a vocal opponent of equal rights for LGBT people. As a player and as a spokesperson for NOM (the National Organization For Marriage, who opposes same-sex marriage), David said he would trade his Super Bowl victory to keep gays from being allowed to marry. He was also a supporter of gay conversion therapy, and he said he “wouldn’t want his children to think gay people are normal.” Which is so very messed up.

One of the best catches ever! It’s cool to see that an old dog can still learn a new trick… Especially when that trick is love.

But now, in his new role as the New York Giants’ Director of Player Development, David says he would welcome any gay player onto the team. Some cynical folks out there might think he is just playing the PR game in his new position, but it looks like it’s legit. Here’s the thing that’s really cool (well, I think it’s really cool): He is crediting his new acceptance of the LGBT community to a deeper and continuing understanding of his Christian faith. He no longer approves of any sort of gay conversion therapy, and he is distancing himself from the anti-gay statements he made before. In an article for Sports Illustrated, Wade Davis (a former player who later came out as being gay, and now serves as the Executive Director of You Can Play), after conversations with David Tyree, quoted him as saying:

“Christianity teaches us love, compassion and respect for our fellow man, and it is in that light that I will continue to work with Wade and others to better serve the gay community. I would absolutely support any player on the Giants who identified as gay, in any way I could. And I will continue to stay in touch with Wade to ensure I am aware of the right ways to do that.”

This may not sound like complete acceptance and affirmation of folks who are gay, but you know what it is? It is a step in the right direction. I love it so much when people realize that the love and acceptance of our gay brothers and sisters does not come DESPITE our Christianity, but instead it comes AS A NATURAL RESULT OF our Christianity. The more we understand who Jesus is, the easier it is to love people who are different than us. So yeah, well done, David Tyree. Keep up the good work!

Scott Fujita, former NFL linebacker, telling it like it is.

Now if the NFL can just get its head out of its ass with this messed up system of consequences that makes it so that a player is better off hitting a woman than he is hitting another player…. But either way, BRING ON FANTASY FOOTBALL!!! This year is finally going to be my year.

***I originally published this with the title “Some Criticism and Some Encouragement For The NFL.” Then I realized that no one was going to read it with that title…. And since I really wanted people to read this one, I redid it with a title that people will actually click on. If you are a subscriber and I faked you out, I apologize. I’ll try not to do that again. Thanks again for reading!

This entry was posted in 4) All Of The Above, 5) Not Quite Sure and tagged Christianity, David Tyree, Fantasy Football, Homosexuality, NFL Criticism, Ray Rice, Suspension, Violence Against Women. Bookmark the permalink.