Homer Simpson’s contribution to the offering plate…. “We can spare it, Marge…. We’ve been blessed!”

Earlier this year, the Church my family and I attend made an official statement of inclusion for the LGBT community. You can read about it in a post I wrote titled “What Happened When My Church Decided To Start Marrying Gay People.” Though many people were relieved and even overjoyed at this announcement, many were not…. And many of those people decided to find a new place to worship. Along with them, about half of our church’s board left. But this was something that was not unexpected–Taking a stand on a divisive issue like this comes at a price. Beyond the difficult process of saying goodbye to people you love and have been in community with, it turns out that many of the people who felt led to move away from an affirming Church are also the ones who pay most of the bills.

Many of the seats that were left empty are being filled by new people–Folks who are encouraged and inspired by the stand that GracePointe has taken. But it’s only natural that people who are just visiting and learning about our community are probably not going to be giving at the same level as the folks who considered this their church home. A lot of times it takes a while to have that sort of buy in…. So now I watch as our home Church struggles with finances as they go through this transition. And I have watched this all against the backdrop of a fight in Indiana over whether people should have the “religious freedom” to discriminate against gay people. You’ve probably already heard that a GoFundMe campaign raised $842,000 in two days to support the Indiana pizza parlor who said it wouldn’t cater the numerous same-sex couples who are lined up to find just the right pizza shop to cater their gay weddings. 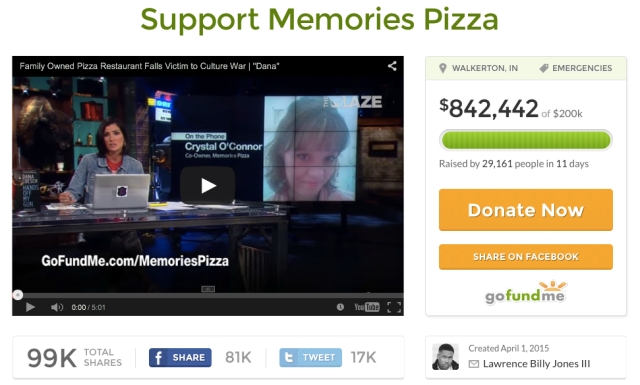 It’s MEMORIES Pizza?!? All this time I’ve been thinking it was Mammaries Pizza. I haven’t been this embarrassed since I messed up that Richard Marx song, “Hold On To The Night.”

But this isn’t the first time tens of thousands of dollars have been raised in support of people who taking a stand for discrimination. People lined up around the block to show their support for Chick-Fil-A’s stance against “the gays” (I wrote about that HERE. The parallels are frightening). And they also raised a bunch for this florist in Washington who believes she is called by God to refuse service to people she views as sinners: 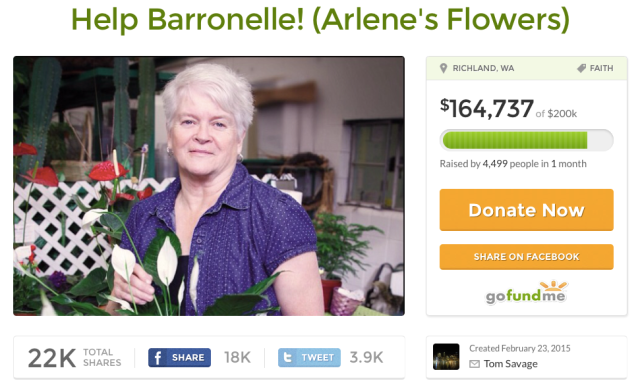 Something tells me she will still take money from people who are getting married for the second time. Or from drunkards. Or from gluttons….

What an amazing contrast. On one side, a Church struggling to make ends meet for saying everyone is welcome…. On the other side, businesses bringing in more money than ever for saying the exact opposite. And when you consider that most of the people giving money to these crowdsourcing funds were doing so because of what they believe they are called to do as Christians, it starts to read like an O’Henry story. With this kind of grand display of support for discrimination made by Christians, it starts to feel like everyone and everything that has to do with the church is full of shit. I’m sorry, there’s really no other way to say it.

For people who talk about how the Church should be the one taking care of those in need instead of the government, all you need to do is compare this GoFundMe page with the others. $6475 raised in four months for a struggling mom of a kid with cancer, and $842,442 in two days for a pizza parlor refusing to cater gay weddings.

This is not okay. We are better than this!

But fear is a fantastic motivator–Fear of hell, fear of punishment, fear of an angry God…. And when people paint a picture of an angry God with an itchy trigger finger, it’s easy to raise money. There are many, many people out there are still worshiping the volcano god, who requires a virgin be thrown in every so often to appease its fiery fury. It’s a very old story….. In Biblical times, when they told each other the story of Abraham hearing God’s voice telling him to sacrifice his son Isaac, the people would have been very familiar with that sort of occurrence. Human sacrifice was a common thing back then. God was angry, and in order to appease his anger, we had to sacrifice the things we held dear…. And there is nothing dearer to us than our kids. Everybody knew about the god that requires the life of your child. But what people don’t get is that even back then, the story of Abraham and Isaac is the story of God telling us, “That’s not who I am. I am different.“

The Bible tells another story of church leaders becoming uncomfortable with the sorts of folks Jesus was hanging out with. They started grumbling to the disciples about how much their teacher was eating with the tax collectors and sinners (By the way, “disciple” is just a word that means “learner.” Jesus was the teacher, and the disciples were the learners…. A fact that might change the way you think about the verse where Jesus tells us to “Go and make disciples of all nations….”). Anyway, as Jesus was explaining why it makes complete sense that he would be hanging out with “sinners,” he says to them, “But go and learn what this means: ‘I desire mercy, not sacrifice.'” It’s interesting that he would pick this one little verse from Hosea to quote to them–“I desire mercy, not sacrifice.“ They’re complaining about him hanging out with sinners, and he says to them, “It’s not about sacrifice. It’s about compassion.” Sacrifice was based on fear, but compassion is based on love. I believe this is what was behind Jesus’ continued frustration with the Pharisees: The fact that they were so concerned about keeping every detail and letter of the law that they were missing the heart of the law. And still today, much of the Church is so concerned with the letter of the the law that they are missing the heart of the law. And that heart is love. But the voice of Jesus still speaks to us today: “Go and learn what this means….”

“Love me, or else” is not the posture of a loving God.

We are not a people who love each other out of a fear of punishment, but unfortunately a large part of the Church still functions that way. And when we, as a community of believers, proclaim that people are loved–not because of what they have done, but because they are a child of God–we take away a big motivator.  “Do the right thing OR ELSE!” responds to fear, whereas “Do the right thing because you are loved, because you are made in the image of a generous God, and because it’s the right thing to do…. and you are being transformed into the sort of person who does the right thing even when it’s hard” speaks to a totally different audience. The second one only works on folks whose level of consciousness is at a place of leaving fear behind, but there are a lot fewer of those sorts of people walking around right now. But “perfect love casts out fear,” and the good news is that God is a God who loves us perfectly–with a love that casts out fear…. Now if we can just get people to start seeing him that way.

So if you are a person who feels inspired by a Church who takes a stand to fully include our LGBT brothers and sisters in the good news that we are the beloved children of God, maybe you’d be inspired to HELP SUPPORT IT. If you go to another Church, and your community is a long ways away from taking that step toward becoming inclusive, but you just feel like you want to help…. YOU CAN. If you feel let down by the Church and think you don’t want to have anything to do with it ever again (believe me I KNOW THAT FEELING), I want you to know that this community has healed many hearts like mine that have been broken by the disfunction of Church, and you can REINFORCE THAT SORT OF PLACE. Maybe you believe all this “God” business is just a bunch of BS, but you can still feel deep inside of you that something horrible was released into the universe when almost 30,000 people raised $842,442 in TWO FREAKING DAYS to support a pizza shop that said it wouldn’t cater a gay wedding, and now you want to dole out SOME SORT OF KARMIC WEDGIE to counteract that colossal act of communal hatred that was funded almost entirely by people who claim to follow Jesus. 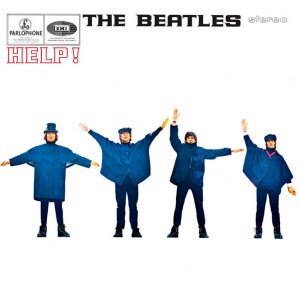 I don’t advertise on this blog, and I have never asked you guys to support me financially…. I might someday. I don’t know. But I do know that this church is too good of a place for them to be struggling with finances because of a decision to vocally extend the radical love of God (as well as all the sacraments) to folks who are LGBT. I give finically, but I wish I could do more to help…. At this point in my life I don’t have a whole lot of dollars to give. But we all help in different ways. If you are in a position where you are able to help, I’m asking you to consider it. You can GIVE ONLINE (There are a whole lot of ways to give, including PayPal). And if you’re not in a place right now where you can give, maybe just consider sharing this post and passing it along to a friend. Either way, thanks for reading.

This entry was posted in 1) Jesus, 5) Not Quite Sure and tagged Generousity, Giving, Gracepointe Church, I desire mercy not sacrifice, Jesus, Jesus Facepalm, LGBT, Love me or else, Memories Pizza, We are better than this. Bookmark the permalink.

5 Responses to Living Generously, Even When God Isn’t Angry Anymore