13 Things White People Do When You Point Out Racism 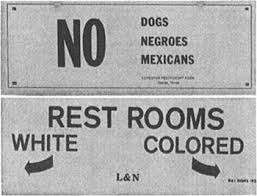 Just by chance, this sign was made by the “Lonestar Restaurant Assn. Dallas, TX”

A few interesting things happen when someone suggests that racism might have played a role in someone’s actions (say, for example, an overly aggressive police officer’s actions). A couple of days ago I published THIS POST talking about how important is is to watch uncomfortable videos (like the one of the girl getting her face shoved into the ground at that pool party), along with a video about systemic racism, and one about videotaping police interactions. This is not the first time I have written posts that point out racial bias and discrimination–I actually write about it quite often–And I’ve noticed that the response to posts like this (at least in my white bread world) follow a fairly predictable pattern. In no particular order, here is what seems to follow any accusation of racism:

Compare how the police treated participants of a shootout in Texas between white bikers (which left 9 people dead) to Officer Casebolt’s reaction to kids jumping the fence of a neighborhood pool. You might not be aware that the police officer in this case was sued in 2008 for racial bias and abuse (the case was dismissed, as the man who brought the suit said “he struggled to track down evidence while incarcerated”). In addition to this, officer Casebolt has a YouTube playlist titled “Police Training” that contains videos with titled like, “Man Attacks Baltimore Police Officer,” “Man Sucker-Punches Cop Gets Kicked in the Face,” and “Chief tells the TRUTH that Black People don’t want to hear.” He has since set the playlist to private, but below is a screen-capture of the contents before he changed the settings on his account:

Not long ago, I wrote a post titled “If It Wasn’t About Race Before, It Is Now.” It chronicled some of the hugely racist comments that followed the protests to the grand jury decision not to indict Officer Darren Wilson. And as much as I know we’re not supposed to read the comments, if we’re going to have a realistic view of the problem of racism, I think we have to from time to time. The anonymity the internet provides allows people to show their true colors, and just like men anonymously burning crosses in people’s yards 70 years ago–The internet is today’s new pointy white hood. And sure, there are always going to be freaky, ultra-racist people there, but the overwhelming number of people who “Like” these horrible comments shows that the “freaky, ultra-racist people” are not alone in their sad way of seeing the world. Here is just a sampling of some of the comments from that viral “Other side of the story” post: 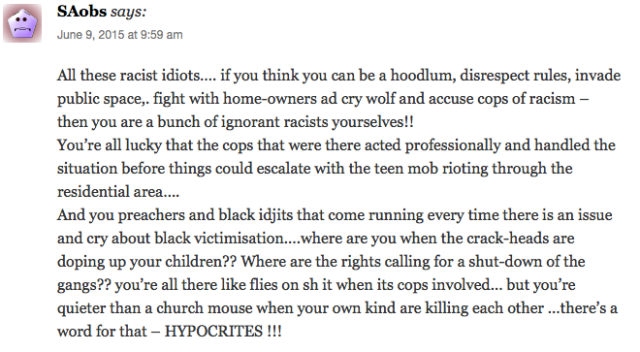 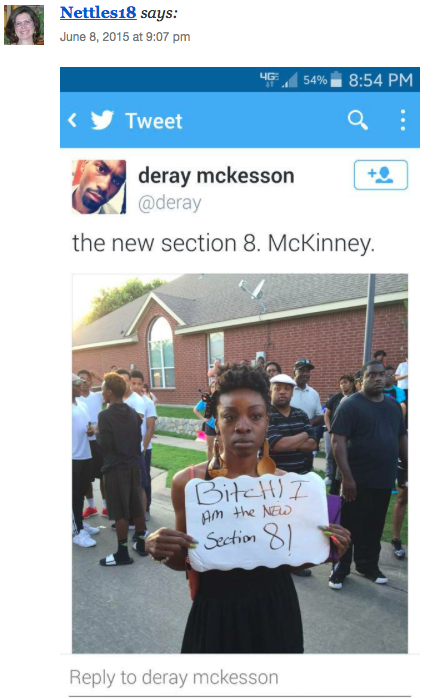 And then we even have some pride in people from the younger generation sharing the fair & balanced “other side of the story” from the CTH (ConservativeTreeHouse)….

There are hundreds of them…. And they are everywhere. Imagine being a black family in this neighborhood and reading so many of these hate-filled, racist comments. Look at just about any of the comments on the videos Eric Casebolt had on his playlist, and you will see stuff that is way worse. So bad that I don’t even want to repost them. But it’s not just YouTube comments and conservative blogs where you’ll find them. Here is one posted on story about the history of segregated pools from NPR:

These are dark times, but don’t be discouraged–In the dark, the light shines even brighter. Sometimes it seems like ignorance and hatred are everywhere, but truth and love are so much stronger. We cannot let cynicism take root in our hearts. We must watch the videos, we must (occasionally) read the comments, and we must let the reality and gravity of the situation become fuel for us to love people even better than we do. ALL people–The ones making the hateful comments, the ones being degraded and diminished by those comments, and the ones having those 13 reactions that I listed above who refuse to see racism for what it is–Everyone and everyone…. Until the light of our love illuminates the darkness of people’s hearts.