Being A Progressive Christian, and Other Things That’ll Get You Sent Straight To Hell….

“When we were children, we thought and reasoned as children do. But when we grew up, we quit our childish ways.”
~ Paul, from his letter to the Church in Corinth (CEV)

“I have much more to say to you, but right now it would be more than you could understand.”
~ Jesus, from The Gospel of John (CEV)

Ironically, we use Farmer’s Insurance…. Even though farmers are usually less progressive. Okay, that confused me. 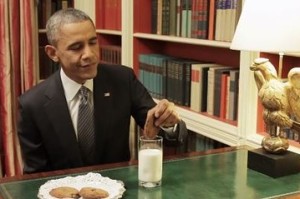 Cookie’s too big for the glass of milk? Thanks “Obama.”

Wikipedia defines Progressive Christianity as “a form of Christianity which is characterized by a willingness to question tradition, acceptance of human diversity, a strong emphasis on social justice and care for the poor and the oppressed, and environmental stewardship of the Earth.” Which (to me, at least) sounds awesome…. but there are a lot of people out there who are very threatened when people start talking about “Progressive Christianity.” To those folks, suggesting that we might not have all the answers right now–or worse, that some of the answers we’ve had in the past don’t really work anymore–is a very scary proposal. There are many religious communities who might use air quotes when they say the word “progressive.” Or, they might put some stank it when they utter that word, and say it like they might say the word “Universalist.” Or “Muslim.” Or “Pedophile.” Or “Obama.”

The thing about clinched fists is that they hurt people a lot easier.

There is no hard, fast definition for what makes a Progressive Christian, but here is how I would describe it for myself: I believe that God is STILL SPEAKING to us…. That everything didn’t get magically settled when the canon was closed. I believe that there is much more power and life in asking the right QUESTIONS than there is in having the right answers. I feel way more comfortable in communities that focus less on our differences and more on our UNITY in Christ (and I know that’s really “churchy,” but bear with me). I believe that the Church, just like the message of Jesus, is meant to be INCLUSIVE instead of exclusive. I believe that it’s important to acknowledge that I think differently than I did ten years ago, and chances are good that I’ll think differently ten years from now…. And that acknowledgment should birth HUMILITY in us. There is an OPEN-HANDEDNESS to Progressive Christianity that might look to some like lack of faith, but I think it’s really more a matter of INTELLECTUAL HONESTY. Progressive Christians are comfortable using words like Evolving, Expanding, Growing, and UNFOLDING. And as a help to you, I have created this handy, dandy visual aid:

I swear it was in focus when my daughter filmed it on my phone, but something got lost in the translation…. Anyway, you get the idea: You can look at that first little square and say, “This is the truth,” and be right, but as you go along, the truth unfolds… And it expands… And it gets bigger… And at some point, you might look back at that first little square–before things started unfolding–and see it as such a small piece of the truth that you can’t remember how you ever saw it as the whole truth.

Let me give you another picture of this: Let’s say a mother says to her son, “Don’t touch that stove!” Then fast-forward 15 years, and maybe that same mother says to that same son, now older, “Would you please go to the stove and make me some tea?” Did the parent ever lie to the child? Of course not–It was always the truth, but she was just speaking to him some where he was at. The stove stayed the same…. The mother was always truthful and loving…. But as the son changed and matured, the mother’s directions evolved to match the expanding consciousness of the son.

First of all, the “Word of God” was never a book. It was always Jesus. Always has been, always will be.

When you read about people in the Bible referring to “scripture,” they weren’t talking about the same book you find next to your hotel bed. Their “scripture” was a collection of stories and books and poems–some which made it into our Bible, and some which didn’t. And one thing that their scriptures were VERY clear about was dietary laws. In an attempt to stay “clean,” the people of that time had specific rules about what they could eat and who they could touch. This is one of the reasons the religious leaders got so upset about Jesus hanging out with “sinners.” The scripture was clear–There was some stuff that was unclean, and if you touched it or ate it, YOU became unclean. And (they thought, at least) if you were unclean, God couldn’t be close to you. But in Jesus, we are told that we have the best picture of what God is like…. And there was God, eating with the people who everyone referred to as “unclean.”

Anyway, fast-forward again to the story in Acts 11 where Peter (the one whom Jesus told he was going to build his Church upon) fell asleep and had a vision of a sheet filled with unclean food. In the dream, God said to him, “Get up, Peter; kill and eat them.” And Peter says, “No way. Not me. I’m a good Jew–I’ve never eaten anything that’s unclean.” But God says to him, “Do not call something unclean if God has made it clean.” And of course, this was hard for him to hear. Because the conservative in him said “God never changes.” But here’s the thing: They didn’t go back to the scriptures and figure out they were reading things wrong–It was Peter’s experience that God changed his tune on the kosher laws. So maybe God DOESN’T change–Who knows? But what we DO know is we have all kinds of examples–in scripture and beyond–of God revealing and unfolding more and more truth about himself as we are more and more ready to hear it. A progressive truth. 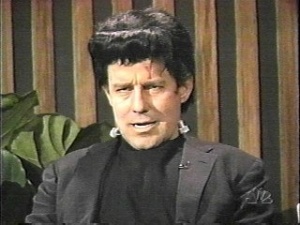 Add to this the fact that Jesus, in the book of John, says, “I’ve got so much more I want to tell you about, but you can’t even handle it right now.” and I don’t know how you could see the story as anything other than progressive. This has ALWAYS been the story. It’s the story of humanity waking up–little by little–to the reality of how much God loves us. It’s the story of the gradual letting go of shame. It’s the story of the discovery that we don’t have to earn God’s love…. But as we realize that we have always been the beloved of God, we discover the appropriate response is to love the people around us (and ourselves). It’s the story of an expanding and progressing idea of who my neighbor is…. The story of an expanding and progressing understanding of inclusion–of who gets invited to the party. The story of the Bible has always been a story of a progressive movement–From a people who thought that their worth was wrapped up in how “clean” they could keep themselves…. All the way to a God who says to us “Don’t you dare call something unclean that I have called clean.” And you know what? He’s still saying this to us today.

Last thing: If you are in the Nashville/Franklin area of Tennessee, you’re looking for a Church home, and you feel like a progressive Church might be a good fit–You should come visit GracePointe Church in Franklin. I can’t say enough good stuff about it.

11 Responses to Being A Progressive Christian, and Other Things That’ll Get You Sent Straight To Hell….