I Don’t Know A Damn Thing About Black Lives

A few days ago, the Nashville chapter of Black Lives Matter was told they couldn’t use the space at the Nashville Public Library to hold their meetings anymore. The reasoning behind this decision was because someone complained when they found out that the meeting was only open to “People of Color.” My initial reaction when I heard about this story was one basically this: “Wait a second… You mean that the Black Lives Matter folks are DISCRIMINATING against white people?!? That’s NOT okay.” Because I care about black lives. I’m one of the “enlightened” ones. I consider myself an “ally.” I want to help. And now you’re having a meeting and you’re telling me I’M NOT INVITED?? Just because I’m white? That’s not FAIR. And  I started cycling through the Martin Luther King, Jr., quotes that I have in my head… Like a dip shit… Thinking to myself, “What would MARTIN think about this sort of thing? You see, in my head, we’re on a first name basis… 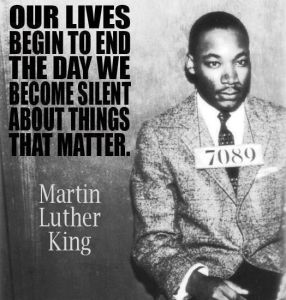 Black lives are one of those things.

So we had a discussion on Facebook… And some really smart, really patient people of color started trying to help me understand. At one point, a comparison was made to a group for rape survivors that wanted to meet without men… And something clicked. What if this is like a survivor’s group for some folks. What if this atmosphere of racism we’ve all been living in–the one that shames me when I catch myself being more afraid of a black person walking toward my car than I would be if a white person was walking toward me–is the same atmosphere that conditions a person of color to react to a face like mine with the same unsafe suspicion that a woman in a rape survivors’ group might have for a man walking into their safe place? And then, in that same Facebook discussion, a bomb was dropped on my little, sheltered brain… It was the words, “It’s literally not about white people at all.” But… Wait… What? There are things that AREN’T about white people??? The discussion took a long time. And then came another epiphany: Imagine if the leadership at every Black Lives Matter meeting had to endure walking well-intentioned white people like myself through the realization of their own privilege… They’d never get anything done.

So yeah… I went into a Facebook thread thinking one thing, and came out with an understanding that I was wrong. I came out convinced that I didn’t know what the hell I was talking about–Proof that something positive CAN actually come from online discussions, and people ARE actually capable of changing their minds. But on another Facebook thread, the discussion devolved–as is so often does–into anger and fear and ignorance. Anger and fear and ignorance that ends up with comments like this one:

“Have a blessed day” covers all manner of hatred…

And this BLM group, by simply insisting on the inherent value of their own lives, was met with a whole lot of folks angrily saying the words, “ALL LIVES MATTER!” They were words on a screen, but I could envision the look on the people’s faces who typed them, and it was a look I’d seen many times before–Faces we’d like to believe are the faces of the past–faces on black and white reels of film from civil rights documentaries. But they are the faces of the people all around us. North and South, East and West. Faces coming to us in high definition, living color, beamed to our TVs and our computers and our phones from political rallies on a daily basis… Thriving hatred. Thriving and emboldened. And proud. And terrifying. 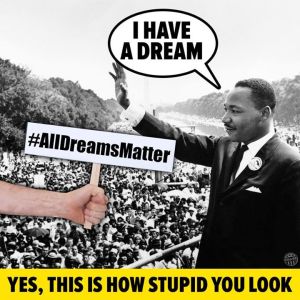 A friend asked me how saying “All lives matter” could be hateful? And what about “black on black crime?” What about Chicago? And all that… So listen, I used to work in inner city schools. And I can tell you that if a black kid at a school like Nashville’s Napier Elementary got in a fight, it was going to be with be with another black kid. You know how I know that? Because that school is almost entirely black and poor. You know why THAT is? Because after the people in power dragged their heels on school integration for as long as they possibly could (when they were finally FORCED to integrate schools) most of the white folks (who could afford to) fled to the surrounding counties. Or sent their kids to private schools, whose high tuition kept things comfortably white. And black families were funneled into certain areas, all while enduring higher rates on their mortgages (while white families enjoyed the wealth-building benefits of FHA loans that weren’t made available to people of color) due to official discriminatory policies like “Redlining.” For more insight into this, you can read THIS AMAZING PIECE by Ta-Nehisi Coates, or you can listen to the remarkable interview below with Bomani Jones…

White people hold up Chicago as an example of “Black people hurting each other,” but Chicago has a well-documented history of housing discrimination–one of the main engines of systemic racism. We push black families who are poor and vulnerable into areas of no economic mobility, and very little hope of ever making it out (other than crime or the occasional professional athlete). We institute policies that insure that 1 in 3 of their men end up in the prison system, while roughly 1 in 13 black men in America lose their RIGHT TO VOTE… Though in places like Alabama, that number is as high as 34%. As with almost everything, the key to change is education–People have to know what HAS happened–and what IS happening–to have any chance of affecting what is GOING to happen. And after enduring every sort of discrimination, and educating themselves to the awfulness of the system that is in place, some people of color get RIGHTLY angry. But you can’t be angry and black and be taken seriously when playing by the rules of white supremacy… Even when you have every reason to be angry. THEN, people like me want them to jump to the level of consciousness of a super hero of love and self-control like MLK, or else we’re not going to listen to them or let them be heard… Because we can do that. Because we’re white. And we speak of “catching bees with honey” to a person whose neck has our foot on it.

So yeah… Kids at black inner city schools (just like people in Chicago) are probably involved in way more fights/crimes with people who look like them, but that’s because all the people who look different got the hell out of there. And you can use stats about “black on black crime,” but IMAGINE, for a second, if you went to that school. And the security officers at that school were kicking the crap out of the kids. And it kept happening, and kept happening… And after the teachers were told, nothing changed. Then, when you told the kids at the schools in the next county over, and those kids were like “That hasn’t been MY experience with school security!” So then leaders from that oppressed community came together and said, “We’ve GOT to do something about this! Together, we are strong enough to make a difference!! Black Schools Matter!!!”

And then a bunch of jack holes from the other school district yells, “ALL schools matter!” Without any sense of irony. Not only that, but imagine they actually call YOU racist for not wanting to invite them to your meeting about how to change things… I feel ashamed.

One of my best friends got pulled over in college, and on his truck he had Grateful Dead stickers. The officer who pulled him over said, “Hey, I noticed those ‘Jerry Bears’ on your window… You have any drugs in here?” The officer then basically insisted he be allowed to search his truck. He flipped through the pages of his owners manual, saying things like, “You sure you don’t have some acid in here?” The whole thing took about 20 minutes, and he had to stand there–with people he knew driving by–while a cop searched his truck for drugs that weren’t there. All because of some stickers. In an older post, I wrote about experiencing a moment of racial discrimination while briefly attending a Historically Black University. But you know what? I can always return to my white-centered norm. And my friend can take those stickers off his windows. But black folks have to stay black. Every day. All the time.

And the thing is, even with any small glimpse that I might get of “what it’s like for black people,” I still have No. Freaking. CLUE about the actual experience of living in America as a person of color. And maybe that realization–that I don’t know a damn thing about black lives–is a good a place as any to start. So I’ll leave you with the beautiful, inspiring words of the man who–almost 50 years after his assassination–I still consider the moral leader of our nation… Please watch it. It’s literally not about white people at all.